Sheepdog trials present an opportunity to see how a working animal compares to others, and the experience can improve things in home pastures, too. 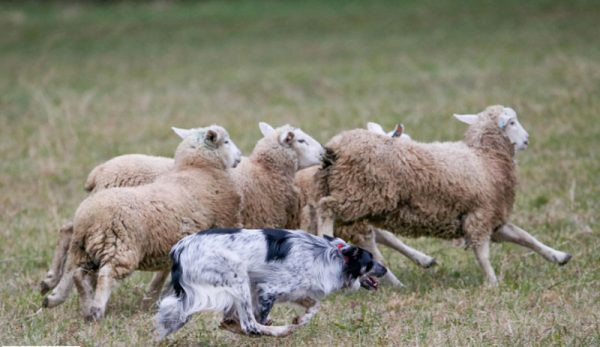 We use border collies on our sheep farm to manage day-to-day operations. I donâ€™t know how we would do it without them. I never worry about how I will get a group of sheep from one pasture to another.

My sheepdog, Dash, is always up for the job! Soot, my husband’s dog, is no less eager. Â

The Work of a Working Dog

The goal is to move your sheep as quietly and stress free as possible. In some cases, we will use our dogs to help us hold sheep while we administer medicine or examine a ewe for a foot injury. Sometimes we need to move sheep through a gate to a new pasture or into a pen for various reasons.Â

Our dogs are the most valuable tools on our farm when it comes to working with the sheep. And we aren’t alone in that beliefâ€”not by a long shot.Â

Some sheep farmers buy a stock dog already trained, which does save a lot of time in getting the dog to be useful on the farm. But a trained sheepdog worth its salt is not cheap, though many certainly seem to think the investment is worth it.

I got Dash as an 8-week-old puppy and have learned right along with him about how to make a great partnership to handle our sheep. It helped that he was from really good herding dog lines. Honestly sometimes I would just watch him figure out what to do without much help from me!Â

But a few years later, with his skills honed and my interest heightened, we decided to try our hand at a sheep herding trial.Â

Sometime back in the late 1800s. Some sheep farmers decided to compare the skill of their herding dogs. Small, local competitions sprang up to see who could do what with his dog the best. There was a lot of pride and probably a lot of bluster when it came to comparing the teamwork needed to manage, move or divide up sheep.Â

Back then the competitors were all sheep farmers who used their dogs to manage flocks of sheep in various types of terrain.Â

Fast forward to today, when the competitive drive of humans has turned sheepdog trials into keenly honed competitions. Some who compete in herding trials are also sheep farmers. Some are not.

Still, the desire to see how your dog’s skill on your own farm compares to another farmer’s dog can be strong.Â

Starting in the Novice Class

After seeing how well Dash worked at home with our sheep, I decided to enter my first herding trial. I had seen a few trials and felt like entering the Novice class would be the ideal thing for us to get started.Â

The goal is to stand at a post and send your dog out into the field to gather up a group of sheep and bring them back quietly and calmly to me. But of course, the dog needs to put a bit of pressure to move the sheep â€¦ just not too much!

After they get up to the handler, the dog needs to guide the sheep around them. Then the dog drops in behind the sheep to move them back up the field, through an opening in a set of panels.

In higher levels of classes, the dog needs to take the sheep all the way across the field in front of the handler to another opening in a set of panels. All the while, the handler may not move away from the post and must guide the dog only with voice and a whistle!Â

After all this, the dog must bring the sheep up to a small pen, where the handler holds the gate open while working with the dog to â€śencourageâ€ť the sheep to go in. As any sheep owner knows, it’s pretty hard to make a sheep do anything!Â

In higher levels of competition, the dog and handler work on separating a specified number of sheep away from the rest of the group. This is called â€śshedding,â€ť which is also useful when you are separating sheep on your own farm.Â

In fact, whatâ€™s really interesting is that most of the skills needed in a trial are those that you would use on your sheep farm. Iâ€™ve asked Dash to move sheep into a barn through a fairly small opening. Iâ€™ve also had him bring me sheep from out in the pasture, then take them down a gravel road to another pasture and through another gate!Â

I won’t say our first debut at a sheepdog trial was a blazing success. Being in a new field with new sheep and a handler probably squeaking out commands tends to get a dog (and the sheep) a bit riled. Â

Dash lived up to his name and dashed around the field as uncontrolled as I have seen him. â€śLie downâ€ť I yelled. â€śLie down!â€ť He did not lie down.Â

Eventually the judge relieved us of our misery and excused us. Â

Of course, the next day Dash was perfect as we moved our own sheep on our own pastures. But weâ€™ve had a few more trials since then and weâ€™re getting better!

I also think it made Dash and I better partners on the farm. We learned a lot about each other. Iâ€™ve also learned so much more about sheep while watching my dog interact with them.Â

Yes, it is a lot of work to use a dog on your sheep farm. But I just canâ€™t imagine any other way to do it!