The very large Shires are popular and skillful draft animals. 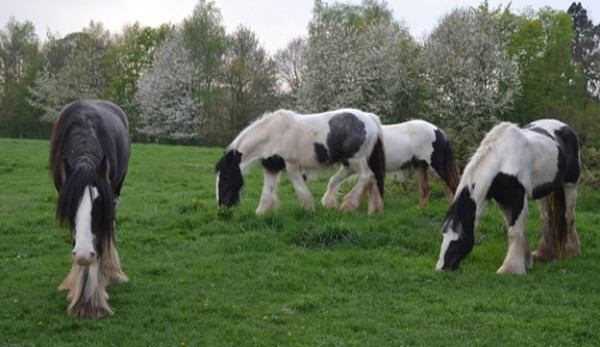 History: The Shire had its beginnings as a European warhorse. The ancestors of todayâ€™s Shires carried Roman soldiers into battle and later knights and their heavy armor. In the 16th century, King Henry VIII gave the Shire horse its name, naming it after the shires, or regions, of England. After the breed was no longer used as a warhorse, Shires found a place in England as work horses on farms and pulling heavy carriages over difficult roads. The Shire was also used in British cities, hauling brewerâ€™s wagons through the cobblestone streets. During the 18th century, the Shire became a popular driving horse. These horses were asked to pull coaches, and were bred for pulling carts. The modern Shire type was established about 1790, with further standardization undertaken in the late 1800s. A breed society was formed in England 1878. Crossed with Friesians, Shires became known for a while as Leicestershire Cart Horses and were famous for their high leg action. America discovered the Shire in the late 1880s and began importing many of these horses to work on farms and pull carriages in the cities. As with other draft breeds, their numbers declined with the invention of mechanized farm equipment. By the 1950s, the breedâ€™s numbers had become much lower. It has slowly made a comeback in the United States, and is on the American Livestock Breed Conservancy watch list.

Conformation: Shires are large horses that average 17.2 hands at the withers. Individuals can sometimes reach 19.2 hands, and weigh as much as 2,000 pounds or more. The Shire head has a convex profile, a broad forehead and long ears. The neck is long and well arched, and the legs are short and feathered below the knees and hocks. Shires give an overall impression of substance and power. The breed is most commonly seen in bay, black, brown and gray. Chestnut Shires are sometimes seen, but are rare.

Special Considerations/Notes: The Shire is a large horse that needs sturdier living quarters than standard-sized horses.