Shorthorn cattle were once triple-purpose beef, dairy and draft cattle, but since 1948, there have been two main types of registered Shorthorn cattle: Shorthorns raised for beef and Milking Shorthorns. 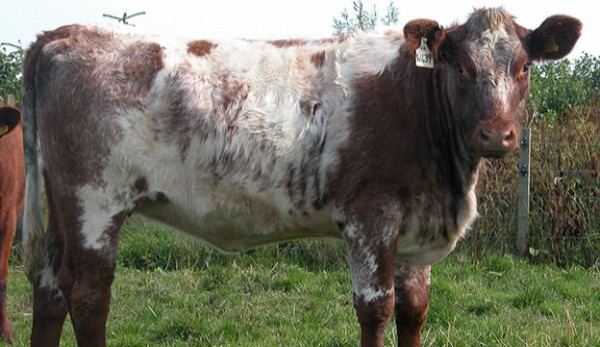 History: The Shorthorn is one of the most influential cattle breeds in the history of agriculture. It was among the first livestock breeds to be improved and had one of the first herd books, which was established in 1822.

Charles and Robert Colling began developing Shorthorn cattle in the Tees River valley of northeastern England during the late 1700s. Shorthorns, then known as Durhams, came to the United States in 1783. Many were subsequently imported to New England where they were treasured for their meat, milk and plowing abilities.

Special Considerations/Notes: Both breeds of Shorthorns are unusually even-tempered. They calve with ease, graze efficiently, and are long-lived and hardy. The average Milking Shorthorn cow produces more than 1,820 gallons of 3.6-percent butterfat in a typical lactation; it’s the quintessential household dairy cow. Shorthorn beef from either breed is close-grained and tasty. Genetic testing has shown that among beef breeds, beef Shorthorns have one of the highest percentages of the tenderness gene. Milking Shorthorns are listed as critically endangered, not only by the American Livestock Breeds Conservancy but by rare-breed societies in Canada, Britain and Australia.