Should You Drop Small Square Bales In The Field As You Bale?

Not every farmer can afford a full suite of hay baling equipment, so let's explore the pros and cons of dropping square bales in the field as you bale them. 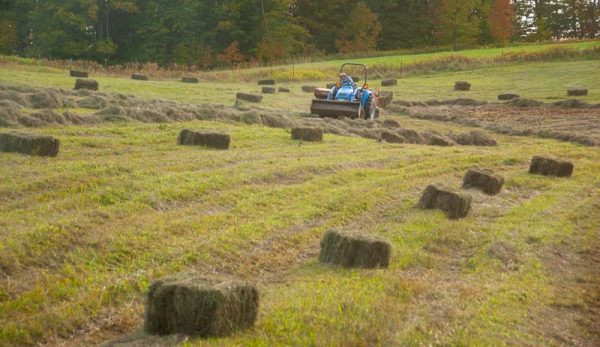 Thereâ€™s no shortage of specialized equipment available for producing small square hay bales. Bale kickers, basket wagons, bale accumulators and other innovations can save a lot of time and labor.

Of course, not every hobby farmer can afford a complete suite of hay baling equipment. A less specialized operation might involve a tractor pulling a baler and a hay wagon, with a couple of workers riding along to stack the bales as they drop onto the wagon.

But waitâ€”thereâ€™s an even simpler approach. Hay can be baled with nothing more than a tractor and a baler if youâ€™re willing to drop the bales straight onto the field for manual pickup later on.

As with anything, there are pros and cons to this strategy. Letâ€™s explore some of the benefits and downsides to letting the small square bales fall where they may.

Read more: We put together some tips for effectively stacking your square hay bales.

Read more: How many horsepower do you really need in a tractor?

In the end, thereâ€™s no right or wrong answer when pondering whether to drop small square bales as you bale them. There are pros and cons on each side of the equation, and whether you drop them or not depends on many interrelated factors, including the specifics of each field you harvest.

What approach do you employ when producing small square bales?