Should You Measure Hay By The Bale Or By Volume?

Counting individual bales might seem like the perfect way to quantify hay production. But varying bale sizes can muddy the equation. 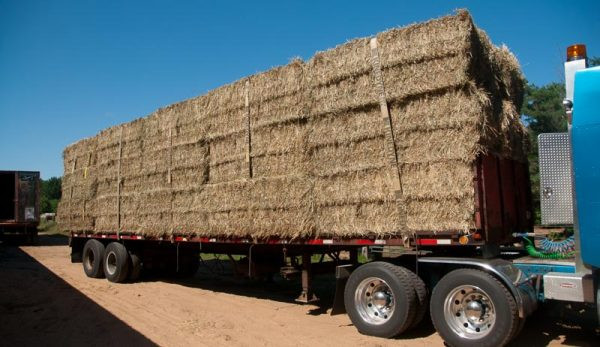 I‚Äôve always been fascinated by the seemingly arbitrary ways farmers measure quantities of hay‚Äîspecifically, hay bales. A ‚Äúload of hay‚Äù could be a fixed number of bales (100 small squares, for example), or it might reference a jam-packed hay wagon or trailer.

At first glance, measuring by the wagon might seem less precise than counting individual bales. But in some cases, I would argue the opposite is true. If ‚Äúa bale of hay‚Äù were a fixed unit of measurement, then counting bales would certainly be an effective approach.

But since bales can vary significantly in size, counting them as though they‚Äôre all the same isn‚Äôt as precise as it seems.

Read more: How much baling twine should you buy? Here are some tips for calculating what you’ll need.

A Barn of Bales

Let‚Äôs crunch some numbers to demonstrate. Suppose you keep horses on your farm, and you know that filling a hay barn measuring 17.5 feet tall, 22.5 feet wide, and 30 feet long will provide enough hay to last for one year.

But what if you decide to start baling slightly smaller bales, measuring just 30 inches long? This seemingly subtle shift would add up quickly. All of a sudden, you would need 2,700 bales to fill the same hay barn.

As you can see, the size of each hay bale has a big impact on how many you‚Äôll feed in a given year. This is important to keep in mind whether you‚Äôre baling your own hay or purchasing your supply from another farmer.

Small square bales are typically priced by the bale. But unless you know their size, it‚Äôs hard to directly compare prices.

Read more: Here are some tips for marking hay bales from different fields and cuttings.

I say ‚Äúmight‚Äù because the density of each bale is another factor to consider. A tightly-packed bale will contain more hay (and weigh considerably more) than a loose, fluffy bale of the same size.

Unfortunately, gauging the weight of a bale isn‚Äôt an infallible means to measure its value. A heavy bale might contain more hay, true ‚Ä¶ or it might simply contain more moisture.

And we all know a moldy hay bale isn‚Äôt worth much at all.

Over the last few years, I‚Äôve experimented a lot with producing different bale sizes, trying to find the right density and length for easy handling with a small crew. For the 2020 hay season, we produced slightly smaller and fluffier bales to make stacking easier.

The results were satisfactory. But it was striking to see how we needed 2,400 bales to fill our hay barn instead of the usual 2,000.

It felt like we produced way more hay. And a strict interpretation of the bale count would have agreed with this belief, but measuring by volume (as gauged by the size of the hay barn) revealed a different story.

So to circle back to where we started, a ‚Äúload of hay‚Äù measured in the form of a single hay wagon or trailer load can actually be more accurate than counting individual bales. Volume can cut through the confusion of varying bale sizes and provide a more accurate picture of how much hay you have (or need).

That’s always a benefit for farmers stocking up for the year.