Before you enter your showgirl in Best of Breed, check out an event to see how it's done. 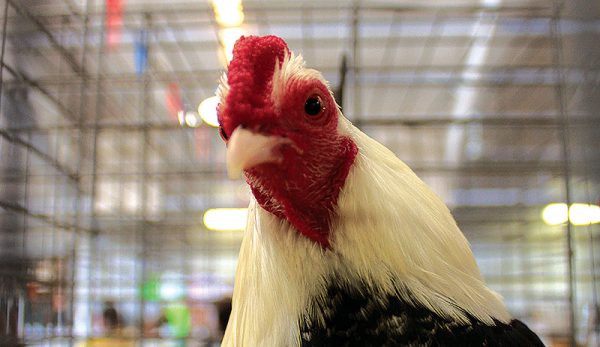 Poultry has mesmerized me since childhood. Every year, my parents would drive more than three hours to Syracuse for the New York State Fair. I loved to study the birds in the two-story showroom for so long that my parents would take turns watching me, as the other explored the fairgrounds. When I was about 16, I had the privilege of staying in an RV for the week of the county fair, where I cleaned show cages, gave the daily presentations on ŌĆ£how to give a chicken a bathŌĆØ and watched the judges as they analyzed the birds.

With more than 25 show tag abbreviations, hundreds of breeds (each with its own varieties) and men in white coats, poultry shows can be overwhelming for a layman who has never entered the ring. If you donŌĆÖt raise birds for show, attending an event is a great way to network, discover new breeds, add fresh bloodlines and get your questions answered by experts.

Get the Show on the Road

In addition to state and county fairs, a variety of clubs host poultry shows. Finding the closest show to you can be a challenge, but PoultryShowCentral.com lists exhibitions by state and region and is a good place to start. Depending on what organization is sponsoring the show, the poultry could include large fowl (standard) and/or bantam chickens, ducks, geese, guinea fowl and turkeys. Some shows also include pigeons, although they arenŌĆÖt unanimously considered poultry.

The shows I attended while growing up in Western New York were always in the spring and fall, which equated to cold and wet. Dressing appropriately for the show is crucial. Wear layers that you donŌĆÖt mind getting dirty. When you return from a show, disinfect your footwear before attending to your home flock so you donŌĆÖt track in disease. Bagging shoes before entering your vehicle for the ride home is a proper biosecurity measure. Always wash your hands after handling animals, too.

Before leaving the house, donŌĆÖt forget your camera, notepad and pen, a few carrying cases and money for purchases. You never know what youŌĆÖll find. Most shows last a whole day, while those in larger venues last two. Many clubs sell food and beverages to raise money to support the organizations. 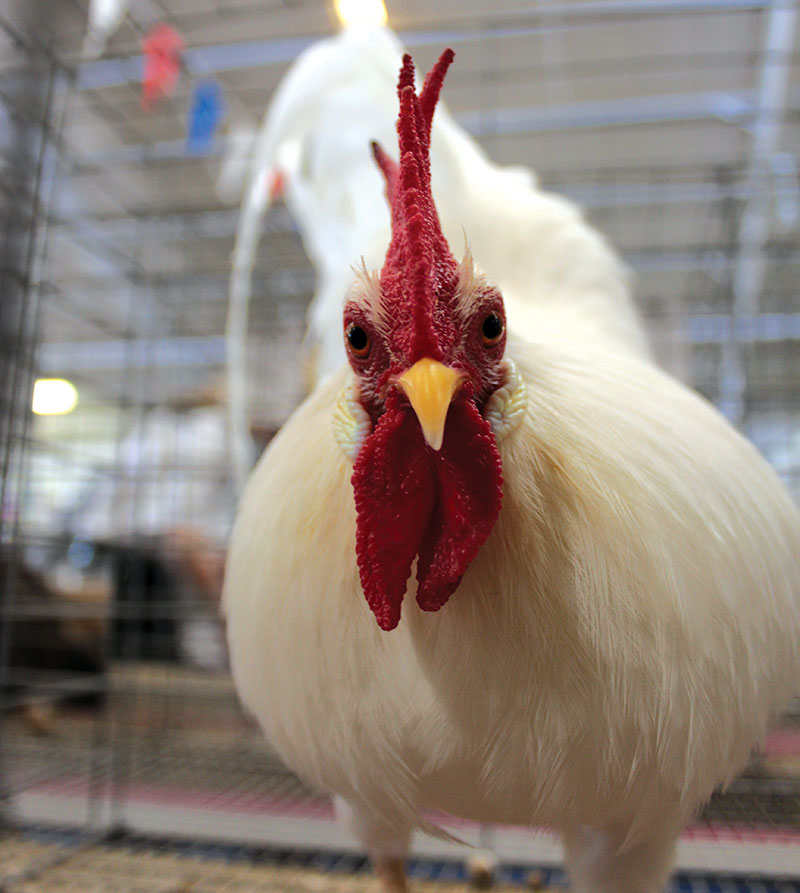 What makes the ideal Wyandotte or Rhode Island Red? Judging what seems like an endless line of identical chickens appears to be a daunting task. But the poultry judges have help from several national organizations and publications.

The American Poultry Association is the oldest livestock organization in North America, founded in 1873. It places exhibition large fowl in one of six classes: American, Asiatic, Continental, English, Mediterranean and Any Other Standard Breed, sometimes shortened to AOSB. Each breed also has a written standard, developed by the national breed clubs, which the judges use to score birds. The standard is the book that all exhibitors and judges use as the guide for all breeds of standard poultry. It depicts a perfect example of a breed show lookŌĆöthe ideal shape of the body, comb, face, eyes, tail, weight, color and so on.

The standard is what you should reference if you want to improve your flockŌĆÖs chance of winning shows.

ŌĆ£The birds [in APA-sponsored events] are judged using the American Standard of Perfection,ŌĆØ says John Monaco, president of the APA. ŌĆ£It has been published continuously by the APA since 1874. It has all the color and type descriptions for all standard breeds of chickens, waterfowl, turkeys and guinea fowl.ŌĆØ

The original standard had 46 breeds and multiple varieties. It was 102 pages, compared with the current standard, which is around 400 pages.

The American Bantam Association publishes its own bantam (miniature chicken) Standard of Perfection, which is the standard by which all licensed ABA judges judge the bantam classes in all ABA-sanctioned shows. There are an estimated 350 ABA-sanctioned shows held annually in North America. Since 1914, the ABA has represented bantam breeders and their interests. The ABA standard gives full descriptions of 57 breeds, 85 plumage patterns and more than 400 varieties of bantam chickens and bantam ducks.

During your visit to a show, study the tag-abbreviated comments on the birdsŌĆÖ cages, so after the judges have gone through, you can see how they rated the birds on their age, sex, breed and breed characteristics. In the Standard of Perfection for each variety (color), it will specifically say the colors judges should look for in each sex. Black with greenish sheen, bluish black forming a wide distinct bar across wing, or dull black stippled with golden brown are three specific examples.

First-time poultry show attendees should just relax and observe, says Karen Unrath, ABA secretary. ŌĆ£The selection of breeds and varieties can be overwhelming. Walk the showroom with an open mind.ŌĆØ

She also says to arrive early, as there will be judging throughout the day. ŌĆ£Most times, the areas that are being judged are closed off to foot traffic so you may have to work around the judging to view all the birds throughout the day,ŌĆØ she says.

Many shows donŌĆÖt charge admission, or if they do, itŌĆÖs usually minimal, so itŌĆÖs a great day of fun that fits everyoneŌĆÖs budget.

A tag on a birdŌĆÖs cage at a poultry show can look like a bunch of letters that mean nothing, but each abbreviation has a specific meaning.

Just like a single-elimination sport tournament, where teams are placed on brackets which represent a series of games to be played, different poultry categories compete with one another to make it to champion row.

Monaco recommends that first-time poultry show visitors observe all the different breeds and varieties. ŌĆ£There are hundreds to look at,ŌĆØ he says. ŌĆ£DonŌĆÖt be afraid to talk to the exhibitors and the breeders, most are willing to answer any questions.ŌĆØ

In my experience, everyone is friendly and eager to talk about their birds, why they love them and how you can get started. They will also share secrets and tips, such as on grooming and genetics.

ŌĆ£The key to doing well at shows is to buy quality birds from reputable breeders,ŌĆØ Monaco says. ŌĆ£If you are under the age of 18, get involved in the youth programs that are available. It makes for a much more enjoyable and rewarding experience.ŌĆØ

Unrath says to prepare well, wash your birds approximately one week before the show, groom your birdŌĆöclip nails and beaks, shine feathers, clean legs and feetŌĆöand just relax. ŌĆ£Every person showing birds at the show is hoping to win,ŌĆØ she says. ŌĆ£However, we all know that there is only room for one ŌĆśtopŌĆÖ bird, so learning and enjoying the hobby along the way is critical.ŌĆØ

At the show, donŌĆÖt miss the showmanship. The youth program will include kids impressing the judges with handling skills, general poultry knowledge and specific breed facts.

As the show wraps up, hopefully youŌĆÖve entered the general raffle with the chance to win feed, poultry products, chicken-themed apparel and possibly live birds. Hang out in the sales area until the end as many of the venders will discount their stock. Now is the last time to network. As winners are announced, so are the fanciers. To keep the show focused on the birds and to prevent human biases, the show tags will have only a number and not the exhibitorsŌĆÖ information. After the prizes have been awarded, many fanciers will go through and place business cards or contact information on the show tag to advertise their breeds. If you want to meet someone but donŌĆÖt know who he or she is, ask the show secretary, who is often sitting at the front of the show or entryway.

If you do come home with new birds, quarantine them for at least a month before introducing them to the rest of the flock. Disinfect cages and equipment with household bleach and water, with a ratio of 3/4 cup bleach per 1 gallon of water.

Showing poultry is not just competing for awards. ŌĆ£It is also about breeding to improve a breed or variety,ŌĆØ Monaco says. ŌĆ£It is a great hobby for all ages. From the younger members to senior citizens, there is something for everyone at a poultry show.ŌĆØ

Unrath agrees. ŌĆ£Attending a poultry show as a competitor or even a visitor is a great experience,ŌĆØ she says. ŌĆ£There is lots of excitement and lots of opportunities to join in. Whether you just want to observe or compete, the end result is usually a great day with great people and beautiful birds.ŌĆØ