How Shrews Fit In The Ecosystem Of Your Garden

Shrews share characteristics with bats, snakes and insects. This fascinating animal can tell you something important about your soil diversity. 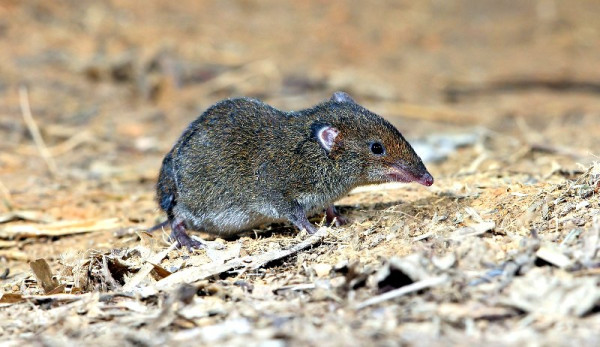 Take the shrew: It’s commonly found throughout North American gardens and farms. It hides well, protects itself well and feeds itself well. Descriptions of shrews include hyperbole: They earn records for the smallest and hungriest mammal with the fastest heartbeat, the briefest sleep, and the shortest lifespan. To deal with such a fast-paced lifestyle, shrews have secret weapons: They can echolocate (an animal form of sonar) like a bat, poison prey with venomous fangs like a viper, and even walk on water like, well, you know who.

It’s The Only Echolocating Land Mammal

Finding their way around in the dark is the norm for shrews, whether navigating their underground burrows or night hunting on the surface. If they are in a familiar space, they get by with their specialized ears and sensitive noses. At least four species of North American shrews can do more. Like bats and marine mammals, these shrews send out low-pressure, ultrasonic emissions (too high frequency for humans to hear). The sound waves bounce off objects and the shrew can â€śseeâ€ť where objects are. Rocks, tree stumps and other obstacles in burrows are defined through this subtle yet amazing adaptation. Shrews use this mainly to get their bearings. Some species use echolocation to hone in on a food source.

Many of the same myths and misconceptions about moles also apply to shrews. They are not rodents, so they do not gnaw with flat-tipped teeth. Shrew teeth are sharp, pointed spikes. Their incisors are fang-like with a second cusp that helps ensure a capture. Shrews are opportunistic omnivores with a diet that consists largely of the things that fall on or live in the soil. The shrew diet consists of seeds, grubs, spiders, crickets, snails, slugs, worms and occasionally a juvenile mouse, along with a small amount of plants. Various species of shrew can coexist with one another, each specializing on different prey.

Shrews are active day and night, all year round, so they have to eat a lot to keep up with their fast-burning metabolism. Some species consume as much as three times their body weight in a day, but because the fuel might not come along when they need it, storage is a necessity. Some species of shrew, such as the northern short-tailed shrew, a type of red-toothed shrew, are equipped to paralyze their prey with venom and carry it back to their burrow for future meals. While the reddish tint on the teeth of the aptly named predator could be dramatized as a sign of the animalâ€™s blood-thirst, itâ€™s because of iron deposits that harden the enamel on the most-used areas of the teeth. This is practical for the shrew, because its teeth wear down with use rather than continuously grow like rodent teeth.

Shrews are vicious and efficient predators, humans need not fear them. A human is unlikely to wind up with a shrew bite, but if it happens it should only swell and hurt but not cause any illness. The compounds in shrew saliva have been studied for their effects on blood pressure, migraines and neuromuscular diseases. (Leave that to the medical researchers, though, and donâ€™t try making home remedies from shrew spit.) Owls and other birds of prey are the most likely predator of shrews. The smell and taste of the shrewâ€™s pungent scent glands repel most canine and feline hunters.

Rare and intriguing, the northern water shrew seems like it could be related to a platypus or amphibian. Its large hind feet not only help it dig through earth, but they also function as paddles in the water. These special shrews, found mainly in New England, hunt on land and in water, providing a great service as population manager of multiple insect species. Biologists speculate that the extra bristles of hair on those special feet trap air bubbles and give the animal the capability to slide along the surface of water like a water strider. For an animal that measures only about 5 inches in length, skating more than 5 feet across the surface of a pond is pretty impressive.

How Shrews Fit In Your Gardenâ€™s Ecosystem

More than 300 distinct species of shrew live almost everywhere in the world, including deserts and tundra. Their favorite habitats include moist leaf litter and thick plant cover. Incorporating fallen leaves as part of your garden beds as mulch, in walking paths, and piled up around the perimeter increases organic matter in the soil and provides more habitat for a diversity of insects and their soil-stirring, fertilizer-depositing predators. In fact, the insects in these habitats might help shape the structure of the shrew’s mouth.Â Researchers have been fascinated with the shrewâ€™s delayed development of the jaw bone and muscles, which form in relation to the dominant prey. Such a sensitivity to the food supply is a unique adaptation that is also reversed when winter sets in. Shrews can reduce their muscle and bone mass to reduce their energy needs. Not many animals can adapt to their environment so quickly.

What does this mean for your garden? The presence or absence of shrews could be directly related to the diversity and abundance of soil life and the quality of the tilth. In areas that have been clear-cut, burned, overgrazed or overfarmed, hardpan soils greatly reduce food sources for shrews. In addition, stressed pregnant shrews give birth to young with abnormalities that affect their jaw development, compounding their challenges. The muscle strength needed to bite into the body of a soft caterpillar is pretty different than biting through the exoskeleton of a hard beetle, for example.

In the big picture, shrews have adapted to changes in their environments over the course of 45 million years. Even for these record-holders, the rapid changes toÂ our landscapes in recent decades are too fast for shrewsÂ to keep up with. In your fields, keep an eye out for this small, fast, hungry and very special little reminder of the vast web of life that your garden or farm supports.