Shropshires produce a heavy, dense fleece with a soft handle and little kemp. The wool is wonderful for spinning and knitting. The lambs of this dual-purpose breed gain weight quickly and yield a good, meaty carcass. 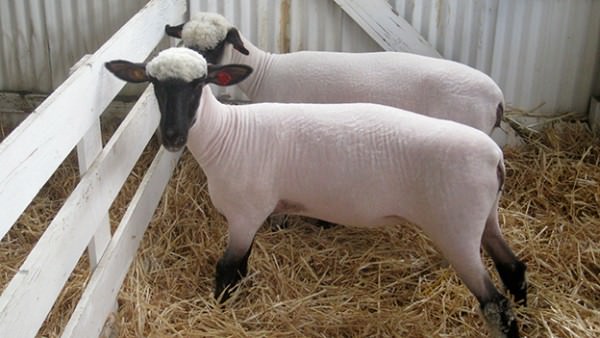 Use: Classed as a medium-wool breed, the Shropshire produces a heavy, dense fleece with a soft handle and little kemp.  The wool – wonderful for spinning and knitting– has a staple length of 2.5 to 4 inches.  The lambs of this dual-purpose breed gain weight quickly and yield a good, meaty carcass.  In northern Europe, Christmas tree plantation owners use these sheep to graze their conifer stands: the animals serve as an environmentally-friendly form of weed control without damaging the trees.  This breed’s gentle nature and medium size makes them a good 4-H sheep for kids.

History: The Shropshire breed probably developed from robust, footrot-resistant native sheep flocking the border areas of Shropshire and Staffordshire, two counties in west-central England.  Improved during the first half of the 1800’s, the Shropshire acquired its name in 1848 and its popularity soon sky-rocketed.  Unknown raisers first imported the breed into Virginia in 1855, and five years later a ram and twenty ewes acquired by Samuel Sutton arrived in Maryland.  After this, the breed stormed the U.S. by the thousands, where they became known as “The Farm Flock Favorite” because of their vigorous and adaptable natures, not to mention their impressive wool cover.  They continued to be popular in the U.S. into the 1930’s

Conformation: Shropshires look like the stereotypical woolly sheep of nursery rhymes and children’s stories. A black face with medium-sized ears and black legs contrast prettily with thick white wool on the body and poll (this is a hornless breed).  There should be no colored wool in the fleece. According to the Shropshire Breeders Association in the UK, these medium-sized sheep are more completely covered in wool than any other British “Down” breed. They have a straight, broad back and muscular neck.  An adult ram can weigh anywhere from 225 to 250 pounds, while ewes weigh from 150 to 180 pounds.  Raisers describe this breed as docile and easy to handle.

Special Considerations/Notes: Toughing out Britain’s capricious climate has created a hardy, thick-wooled breed that tolerates rain, snow, and wind well. Prolific Shropshire ewes tend to lamb with ease, make excellent mothers, and have long productive lives. Although Shropshire breeders have been selecting for less wool on the poll, as heavy wool growth in this area can contribute to “wool blindness,” you should watch out for this problem and shear if necessary.