Go native with these gorgeous shrubs with berries. The birds as well as your flower bouquets will thank you. 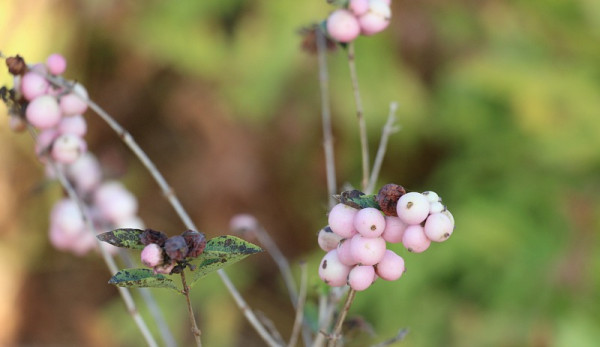 If you’re looking for a few new shrubs to add to your farm’s landscape, consider including a few species with beautiful berries. If you grow cut flowers to sell at farmers markets, berry branches make a wonderful addition to late-season bouquets. And even if you don’t cut the branches for sales, you’ll improve your farm’s wildlife habitat as many berried shrubs are an excellent resource for migrating songbirds, deer and other creatures. Here are some of our favorite native shrubs with berries for your farmscape.

This lovely relative of the honeysuckle is a North American native shrub that bears bunches of beautiful, snow-white to soft-pink berries. It grows in both full sun and full shade, and the tiny bell-shaped flowers are bright pink. Though snowberry is a great food source for birds and deer, the berries are poisonous to humans. Growing to a height between three and five feet, the snowberry is also a larval food source for the snowberry clearwing moth, a species of day-flying moth commonly known as the hummingbird moth. Hardy in U.S. Department of Agriculture zones 3 to 7.

The beautyberry is aptly named as its brilliant jewel-toned purple berries are absolutely stunning. When it comes to shrubs with berries, few are as lovely as the beautyberry. Reaching between three and five feet in height, the arching branches of green, opposite leaves are covered with clusters of berries in early autumn. Beautyberry makes a gorgeous feature plant in garden beds, but it also looks great in mixed plantings and flowering meadows. Thriving in full sun to light shade, this North American native shrub even works in swampy, low-lying areas. Birds love the berries, as do squirrels and deer. Hardy in USDA zones 5 to 10.

With perfumed foliage, berries and bark, nothing beats the northern bayberry for plantings next to roads and driveways regularly salted in the winter. This shrub is especially salt tolerant, and it’s semi-evergreen habit makes it interesting all winter long. The berries are a silvery gray and held close to the upright stems. Bluebirds adore bayberries, and when migrating, they can be found in small flocks, feeding on bayberry plants. Reaching up to seven feet in height, bayberries are easy to tame with regularly pruning, if you need to keep them a more manageable size. Hardy in USDA zones 3 to 7.

Easy to grow and with multi-season interest, the American cranberrybush is covered with white flowers in the spring, green, maple-like leaves in the summer and plump, red fruits in the fall and winter. It’s extremely hardy, surviving north into USDA zone 2 and south to zone 7, this flowering shrub also has beautiful fall color. Tolerant of wet soil conditions, the berries of cranberrybush are also edible for humans, though they’re quite tart. There are many named cultivars of this native shrub, but stick with the straight species for one that reaches a height and width of eight to ten feet.

American black elderberry is native to most of the eastern two-thirds of North America. It thrives in full sun, but is tolerant of both wet and dry soils. The vase-shape of this shrub is lovely, with long, arching branches. Clusters of white to soft pink flowers are borne along the branches and are followed by flat-topped clusters of dark berries. The berries are enjoyed by a great many birds and humans alike, who’ve been turning them into elderberry wine and jam for generations. For human use, the fruits must be cooked and strained prior to eating. The hollow stems of this native shrub are also excellent overwintering sites for many native pollinators and beneficial insects as well. It is also a larval host food for several moths. Hardy in USDA zones 3 to 9.

In addition to these shrubs with berries, there are many other North American native trees and shrubs that bear fruits capable of both looking gorgeous in a vase and supporting wildlife through the winter. Other choices include possomhaw viburnum, serviceberry, winterberry, holly, shrub dogwoods, sumac and junipers.