How Do Sight And Hearing Affect Farm Animal Behavior?

Understanding differences in sight and hearing between us and large livestock animals helps you interpret behavior and improve your interactions with them. 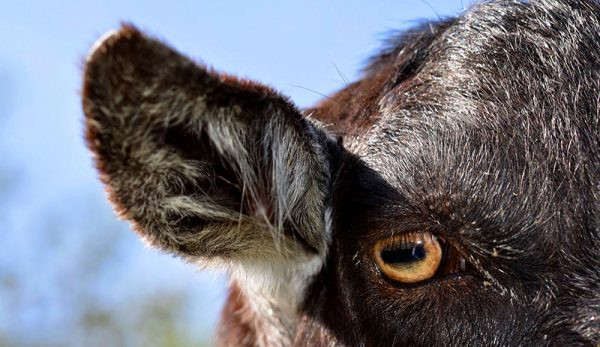 Last month we examined taste and smell in livestock and how different these senses can be between species and also compared with our own. This month, let’s look at the sight and hearing of some of the animals on our farms.

The Sense of Sight in Livestock Animals

While sight is typically the dominant sense for a grazing prey species, the differences between livestock sight and our own is interesting. The animals’ field of view differs greatly from our own.

This is because of the position of the eyes in the head. For cattle, sheep, goats, horses, camelids and even pigs, the eyes sit on the sides of their heads rather than the front, expanding how wide they can see at any one time.

Cattle and horses, for example, have more than 300 degree panoramic vision. Compare that with that of humans, who see only 180 degrees at a time because our eyes face forward.

While these prey species can see practically all the way around them, it’s important to realize they do have a blind spot directly to the rear. Understanding an animal’s field of view helps when learning how to approach that animal and what might startle it.

Grazing species have wide fields of vision, they lack great visual acuity. Our farm animals tend to be near-sighted, meaning their long distance vision is poor. Additionally, their eyes are slow to focus on specific objects.

Cattle in particular also have weak vertical vision, meaning to see something high or low, they must dramatically move their heads up or down. This combination of slow optical focus and limited vertical vision means that sometimes slight shadows on the ground can appear to cattle as deep rifts. Consider this as you’re moving cattle, especially in barns with artificial lighting.

The Role of Hearing in Farm Animals

For a grazing prey species, hearing is an important sense, too. Given the ability to rotate their ears at the base of their heads, horses, cows and small ruminants can easily pick up sounds all around them, unlike humans with immobile, forward-facing ears.

Ruminants can also hear a wider range of frequencies. Adult humans hear in the range of 12,000 to 15,000 Hertz (Hz) while cattle can hear roughly between 16,000 and 40,000 Hz, meaning they can hear much higher-frequency sounds than we can.

These facts are interesting, but they really matter when it comes to interacting with our animals.

Understanding that livestock are more sensitive to sounds should tell us that the quieter we are when handling them, the better. This has been demonstrated in studies with cattle where excessive noise has been correlated to increased heart rates, indicating greater stress in these animals.

Even the type of music you play in the barn can affect the animals. A fun study conducted in 2001 in England noted that a group of dairy cows produced as much as 3 percent more milk when slow music was played compared with times that faster beats were broadcast in the barn.

Does this means perhaps you should play some Simon and Garfunkel in your barn instead of, say, heavy metal or up-tempo pop?

That’s debatable, but being perceptive your animals’ sight and hearing, and how common sensory inputs on your farm affect livestock, is always a good idea.