Signs Of Barber Pole Worms In Sheep and Goats

Our resident goat blogger advises on how to check your herd's eyes. 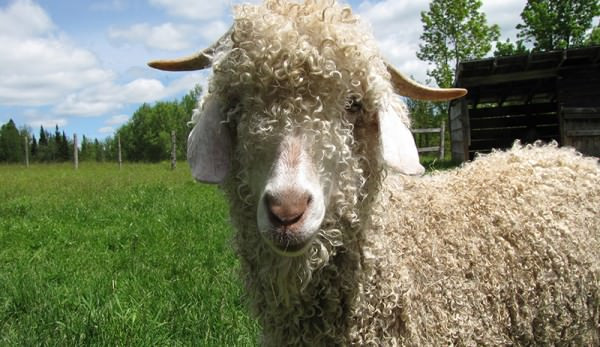 My┬ĀAngora goat is anemic due to parasites. The vet says that itŌĆÖs because the parasites have become immune to most dewormers. What can I do to give my Angora a boost, and is there any way I can avoid using harsh chemical dewormers to keep worm populations down in my goat and sheep herd? ŌĆöKendra

Kendra, IŌĆÖm glad you asked this question. According to people at sheep and goat discussion groups Mom belongs to, lots of┬Āgoats and┬Āsheep are becoming anemic. Some are dying due to┬Āparasite overload this year. ThatŌĆÖs because prolonged heat and heavy rainfall cause barber pole worms to proliferate. This week, letŌĆÖs talk about barber pole worms and anemia. Next week, weŌĆÖll discuss complementary types of parasite control.

Barber pole worms (Haemonchus contortus) are the most serious parasite of sheep and goats in the United States. Because barber pole worms are bloodsuckers, overloads cause potentially fatal anemia, as well as lower growth rates and greatly reduced reproductive performance.

Barber pole worms are 3/4 to 1 inch long and tapered at both ends. Females are red and white stripeŌĆölike an old-fashioned barber poleŌĆöand males are solid red. They live in the abomasum, or true stomach, of sheep and goats. TheyŌĆÖre a worldwide threat but especially troublesome in hot, wet climates.

Bottle jaw, also called mandibular edema, happens when fluid accumulates under a sheep or goatŌĆÖs jaw. Fluid also builds up in the animalŌĆÖs abdomen and gut wall, but you canŌĆÖt see that with your naked eye. If your goat or sheep gets bottle jaw, he is very close to death, so call your veterinarian without delay! But donŌĆÖt mistake┬Āmilk goiter, a benign swelling some kids and hair sheep lambs develop where its jaw meets its throat, for bottle jaw. Bottle jaw is puffy and hangs down from the jaw itself.

ThereŌĆÖs an┬Āeffective test available for detecting barber pole worm infestation in sheep. A less formal way is to monitor your goat or sheep for barber pole infestation is to check the membranes around its eyes at least every other week during the hot, damp summer months and monthly the rest of the year. South African livestock specialists developed a diagnostic procedure called┬ĀFAMACHA that you can learn by attending a FAMACHA clinic, but you can run a basic test without FAMACHA training (see video below). Put one hand over your animalŌĆÖs face and the other under his jaw, and use your thumbs to pull the tissue around his eyes up and down, taking a quick peek at the color inside his lower eyelid. It should be red to very rosy pink. If itŌĆÖs pink to pale pink, your sheep or goat is anemic, and if itŌĆÖs white, he needs to be wormed and see his vet right away.

Anemia can set in very quickly. Because itŌĆÖs been so hot here in the Ozarks, Mom and Dad checked us goatsŌĆÖ and the sheepŌĆÖs eye membranes two days ago and a bunch of us needed to be dewormed, even though our usual checkup is more than a month away! Checking eye membranes is easyŌĆödo it often and it could save your animalŌĆÖs life.