Given their versatility and labor-saving potential, silage tarps can make a great addition to your vegetable-growing toolkit. 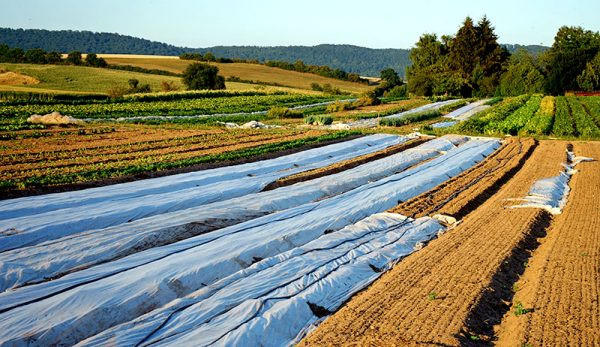 Fifteen years ago you’d have been hard-pressed to find silage tarps in use on a vegetable farm. As the name implies, silage tarps (also known as bunker covers) were designed to cover silage throughout its fermentation and storage. Silage tarps are much larger than the nylon tarps you find at a hardware store and are made of a thick polyethylene that has been UV treated.

Farmer and author Jean-Martin Fortier is largely responsible for having recently popularized the idea of using silage tarps in vegetable production for a variety of purposes. He outlines this in his book The Market Gardener (New Society Publishers, 2014). Thanks to Fortier’s influence, the tarps have found their way into the hands of more innovative growers, where they have been put to an increasing variety of uses.

Here are four of the most common and helpful uses for silage tarps that you can try out this year.

Beginning with the basics, many farmers use silage tarps to suppress weeds between crop rotations. Say youâ€™ve just harvested out several neighboring beds early in the season and know you’ll have two to three weeks before you seed or transplant the next round of crops into the space. Rather than let the beds remain fallow you can cover them with a silage tarp to prevent weeds from laying claim to the space.

Similarly, the tarps can be used to deal with those troublesome areas of the farm that you habitually let get out of hand. I frequently use them to cover two or three beds that Iâ€™ve already lost to weeds. This can be especially helpful later in the season when you need to kill back a patch of weeds quickly before they set seeds.

Using a method popularized by author Curtis Stone inÂ The Urban Farmer (New Society Publishers, 2015), silage tarps can be applied to an area youâ€™re about to plant into to create a â€śstale seed bed,â€ť or a growing area in which the weed seeds have germinated and been killed. To create a stale seed bed, many growers till to bring weed seeds to the surface and then cover the growing area with a silage tarp. After the warm temperatures under the tarp prompt the weed seeds to germinate, the lack of sunlight quickly kills them. In order for this technique to work well itâ€™s important to know the germination time of the particular weed seeds you want to kill so you can leave the tarp on long enough.

For growers interested in minimizing tillage, silage tarps can be used to kill back and break down a cover crop. The amount of time it takes to kill the cover crop depends on your climate and the particular cover youâ€™re dealing with, but generally two to four weeks is sufficient. After that you can transplant directly into the cover crop residue, which acts as a readymade mulch.

Finally, silage tarps can help you get a jump start on spring. Covering a growing area with a silage tarp early in the season enables you to exclude spring rains from those beds, letting you work the soil far earlier than you otherwise could. The tarp also heats the soil by several degrees, giving whatever you seed in the area a jump start.

Given their versatility, durability and relatively modest price, silage tarps can be a worthwhile addition to your vegetable-growing toolkit. They come in a variety of sizes, so think about the size of your farm before purchasing one. Anything larger than 25 feet by 100 feet requires two to three people to move, so also consider labor. Once you have a silage tarp on your farm youâ€™ll almost certainly continue to find good uses for it.