Silkie Chicks in Tutus? Welcome to the Happy Hen Haven 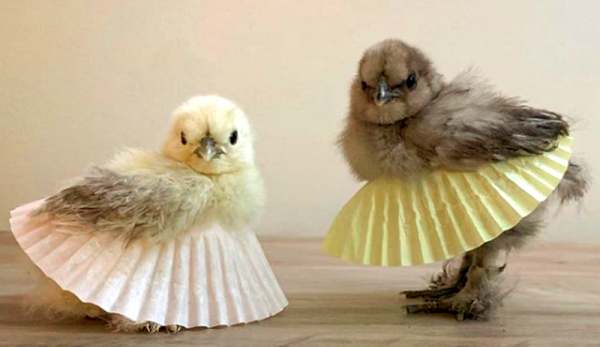 The Happy Hen Haven bills itself as “a big family on a small Iowa hobby farm.” In terms of numbers, Jeffry and Heather Wolf’s venture claims more than 50 chickens living contentedly on its premises—and many of these Silkie chicks have become social media stars after appearing in a series of eye-catching and smile-inducing photographs on the farm’s Instagram account.

After discovering the Happy Hen Haven’s chicks, I spoke to Heather about the origins of the hobby farm, the appeal of Silkies—and just how you go about photographing chicks in tutus.

“Our motivation for the Happy Hen Haven began with our 11 children,” says Heather. “For about a year they kept insisting we should get a couple of chickens to add to our family.” With no previous chicken-keeping experience, Heather began researching and decided that Silkies would be a smart fit with her family’s lifestyle.

“We only intended to get a couple, but ended up coming home with nine, and it was at that moment our chicken addiction began,” she says. “Chicken math is real!”

Silkie Stars of the Show

The Happy Hen Haven’s initial focus on Silkies came about after Heather chanced on an image of “a tiny ball of fluff not resembling a traditional chicken.” She was instantly smitten. It helps that Heather also discovered that Silkies would be “hardy enough for our harsh Iowa winter and hot humid summers.”

These days, the Happy Hen Haven hosts other breeds of chickens too—but the heart of the hobby farm is still about Silkies.

“Silkies have such a sweet, docile temperament with a hint of a diva attitude,” says Heather when asked to describe the personality of the Happy Hen Haven’s chicks. “They certainly aren’t the brightest of breeds—and are a bit aloof—but their adorable personalities make up for it.”

One of the Happy Hen Haven’s most popular Instagram pics stars a couple of chicks in tutus.

Yep, say it out loud: Chicks in tutus.

It turns out that Heather stumbled across a picture of some ducklings in tutus and decided to spruce up her Silkies in a similar fashion.

“I grabbed a couple of cupcake liners from the kitchen cabinet, cut small holes in the centers of the liners, and brought up two of the smallest babies we had at the time,” she explains. “When I placed the liners on the chicks, they stood there in perfect pose, so I grabbed my camera and only needed to snap a couple of pictures. Honestly, they didn’t seem to mind at all!”

Heather’s photograph of the chicks in tutus is the Happy Hen Haven’s most popular pic to date, but Heather says her personal favorite features a Cuckoo Silkie.

“He’s a giant ball of frizzy fluff and charisma,” she says. “He just loves attention.”

If the Happy Hen Haven has inspired you to try and snap some pictures of your own chicks, Heather says you shout set up everything before you start the shoot. She says treats and patience are key, and it helps to have a shiny object to wave around to get the chicks’ attention.

“If you are photographing a young chick who is still under a heat lamp, try to keep the session as short as possible and in a warm and dry location,” Heather advises. “Otherwise, they can become chilled quite quickly. Also, never try to force a pose—I usually keep it under five minutes.”