Each cocoon produced by silkworms can produce an unbroken strand of silk that stretches to a mile and a half. Learn more about sericulture. 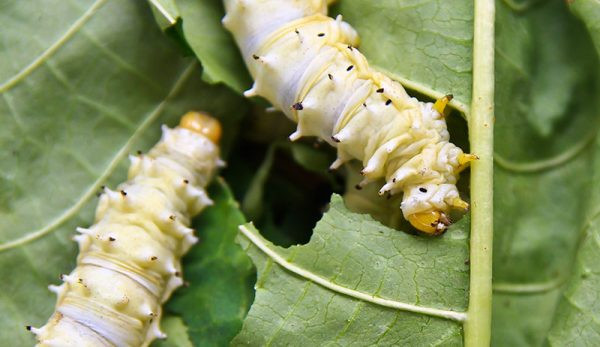 Farming comes in many shapes and sizes, some as small as one-inch caterpillars that produce a valuable fiber: silkworms. Bombyx mori, a moth selectively bred for its silk and not for its flight, is completely dependent on humans and was domesticated around 5,000 years ago. Despite earnest attempts to make silk a homespun American crop over the past four centuries, it has never been competitive with thousands of years of practice and cheaper labor that fuel Asian silk production. For fun, to learn about insects or as a small business venture, sericulture (farming worms for silk) could easily fit into a backyard homesteaderâ€™s system.

Food is the most important consideration for raising silkworms, because they are specialists. Bombyx species eat mulberry leaves, preferably the white mulberry from Asia but also North Americaâ€™s native red or black mulberry trees and possibly osage orange. Sericulture was encouraged in North America as soon as colonists settled Jamestown, and white mulberry trees were imported and planted as early as 1613. The white mulberry doesnâ€™t usually have white fruit, and it hybridizes with the darker species, so the tree types are difficult to tell apart, although the native species prefer shadier places to grow.

As with hatching chicks from eggs, a farmer’s next concerns are temperature and timing. Moth eggs, also called silkworm seeds, can be ordered for less than 30 cents per egg. If they arrive before mulberry trees are leafed out, you can hold the eggs in a refrigerator until you are ready to place them in their nursery. When that time comes, increase warmth and humidity gradually to around normal room temperature, 70 to 75 degrees F with humidity as high as 90 percent. When the eggs hatch, the worms go through four instars or growth stages, molting about every five or six days. During this time, humidity should be lesser, maybe 50 percent, and the worms and food should stay of out direct sunlight. Supply fresh mulberry leaves at least daily as the caterpillars grow exponentially. As they eat, they defecate; remove the frass daily.

In about a month, the silkwormsâ€™ voracious appetites steeply increase, then slow down. This change in behavior along with head-waggling indicates they are ready to spin their silk, for which they need a protected space. Cocoon holders can be anything that has a texture the silkworms can attach their silky anchors to, such as egg cartons, berry boxes, baskets, chicken wire or simply leafless branches. Scaling up, you can build a shelving system with good ventilation, similar to drying racks for dehydrating herbs. In the 1850s, Kentucky Shakers raised silkworms, spun the thread into fabric and sold it as well as finished pieces to the public. At one village, the production was contained within dresser drawers. Another village built silk houses, special accommodations for rearing caterpillars, among their mulberry groves.

When the cocoons are complete, the time comes that every animal farmer has to face: The pupae inside the cocoons must be killed. If they are allowed to complete their metamorphosis, an enzyme the moth produces as it emerges weakens the continuity of the long, strong filament. Boiling, steaming or baking the cocoons will kill the pupae. An alternative to raising silkworms only to kill them is to gather cocoons from the wild, if you live in a place where there are other types of silkmoths. Here is a list of some of the large and impressive wild silk moths of North America.

Next comes the reeling process, an art that the older traditions have perfected. Techniques vary, but all involve hot water baths that loosen the strands and enable spooling onto reels. A single cocoon could hold an unbroken strand of silk that stretches to a mile and a half. Several cocoonsâ€™ filaments are twined together to make one thread.

Any small farm system that integrates animals will benefit by maximizing the functions of all elements, termed â€śstackingâ€ť in permaculture. What other layers of usefulness can come from raising silkworms? What do you do with hundreds or thousands of dead silkworm pupae? Donâ€™t waste the protein. Consider the whole system, and what other animals the worms can feed: if not yourself, then pigs, chickens and fish. Pair sericulture with aquaculture, for example. Mulberry trees could edge a pond full of fish that eat the pupae from the unraveled cocoons. The frass alone can be fish food, or fertilizer for the trees. The trees in turn provide shade, serve as a windbreak and produce delicious fruit.