Simon the cat was the only feline to win the PDSA's Dicken Medal, honoring animals that demonstrate outstanding bravery during wartime. 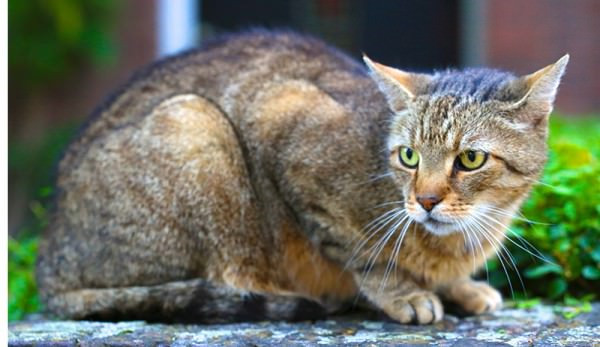 A few weeks ago, I wrote about theÂ brave carrier pigeons that saved many lives during World Wars I and II. I mentioned that in 1943, a British organization established the Dickin Medal to honor the lives of animals that served during wartime. The medal was awarded 54 times between 1943 and 1949 to 32 carrier pigeons, 18 dogs, three horses and one cat.Â  One of our readers, Abigail from Chatham, N.Y., commented saying, “So inspiring. I wonder what the cat did?â€ť Uzzi and I decided to find out!

The Dickin Medal is awarded by the Peopleâ€™s Dispensary for Sick Animals, better known in Britain as the PDSA. The organization was created to care for sick and injured animals of people in need. The PDSA was the brain child of Maria Dickin, a society lady who found fulfillment working among the poor of London, especially with the animals she found there. In her book, The Cry of the Animal, she wrote, “The suffering and misery of these poor, uncared-for creatures in our overcrowded areas was a revelation to me. I had no idea it existed, and it made me indescribably miserable.â€ť So she dedicated her life to improving the welfare of animals everywhere. As part of her work, in 1943, she commissioned the Dickin Medal to honor animals that served in the Armed Forces, Civil Defense or another military outfit worldwide that showed outstanding bravery. The only cat to ever earn the medal was Simon.

In March of 1948, a 17-year-old British seaman found a young, skinny, black-and-white male cat wandering the dockyards of Hong Kong. He smuggled the cat aboard the HMS Amethyst, where the cat proved adept at catching and killing the many rats that set up house on the lower decks. The cat quickly became the shipâ€™s mascot and was much loved by the crew, who named him Simon.

However, when the Amethyst chugged up the Yangtze River to replace the duty ship there, communist forces opened fire on the Amethyst. One of the first rounds ripped through the captainâ€™s cabin, killing the captain and seriously wounding Simon.

Somehow Simon managed to crawl on deck and was rushed to the shipâ€™s medical staff. They treated his burns and removed four pieces of shrapnel. Although he wasnâ€™t expected to last the night, Simon recovered and resumed his duties as rat catcher.

When news of Simonâ€™s bravery reached Britain, he became an instant celebrity. In addition to the Dickin Medal, Simon was awarded the Blue Cross medal, the Amethyst campaign medal and the rank of Able Seacat. His fans sent him so much mail that a human friend, Lieutenant Stuart Hett, was appointed “cat officerâ€ť to handle his correspondence. Simon was presented with honor wherever the Amethyst stopped in port.

The ship eventually returned to its home port in Plymouth, Devonshire, and Simon entered quarantine, where he became ill with a virus and died on Nov. 28, 1949. Hundreds of mourners, including the entire crew of the Amethyst, attended his funeral at the PDSAâ€™s Ilford Animal Cemetery in East London.