Compounds found in fire-ant could be used to prevent dampening off in your squash, according to the USDA. 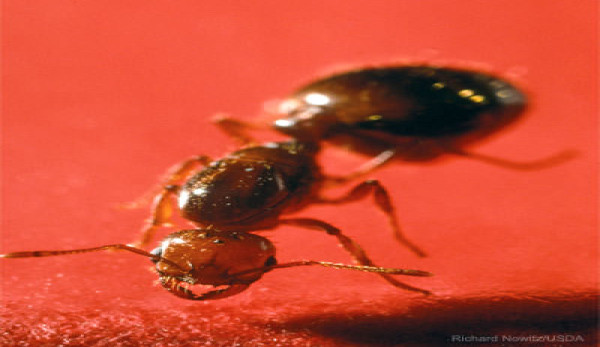 Red imported fire ants are named for the fire-like burn of their sting. Now the same venom that packs such a painful wallop might be able to be harvested for good.

Studies by the USDA have shown that certain alkaloid compounds in the ants’ venom—piperideines and piperdines—can hinder the growth of the crop pathogen Pythium ultimum, which causes damping-off diseases that decay the seed or seedling of vegetable, horticultural and cucurbit crops.

Chemical fungicides, delayed plantings and crop rotation are among methods now used to control P. ultimum. Despite such measures, damping-off remains a costly problem, and new approaches are needed, according to Jian Chen, an entomologist with USDA’s Agricultural Research Service.

Chen is coinvestigating the potential application of fire ant venom to manage soilborne pathogens like P. ultimum in collaboration with Xixuan Jin, ARS microbiologist, and Shezeng Li, of the Institute of Plant Protection in Baoding, China. The researchers used sophisticated extraction techniques to obtain purified amounts of piperideine and piperidine from the venom glands of both red and black imported fire ants, which are considered invasive pests and a dominant species on more than 320 million acres in the South, as well as in other states and Puerto Rico.

In Petri-dish trials, the researchers exposed P. ultimum‘s threadlike growth form, called mycelium, to various concentrations of the alkaloids and monitored the effect on the pathogen’s colony size. Its spore-forming structures, called sporangia, were similarly exposed.

The results, reported in the December 2012 issue of Pest Management Science, include significant reductions in the growth and germination of the pathogen’s mycelium. Both alkaloids performed equally well and retained their activity against P. ultimum for up to 12 weeks when stored at room temperature. Additionally, more than 90 percent of sporangia failed to germinate when exposed to the alkaloids at concentrations of 51.2 micrograms per milliliter.

Read more about this research in the August 2013 issue of Agricultural Research magazine.