Large herds require sizable feed commitments, but you can slaughter pigs at any size for delectable meat and easier hog-keeping. 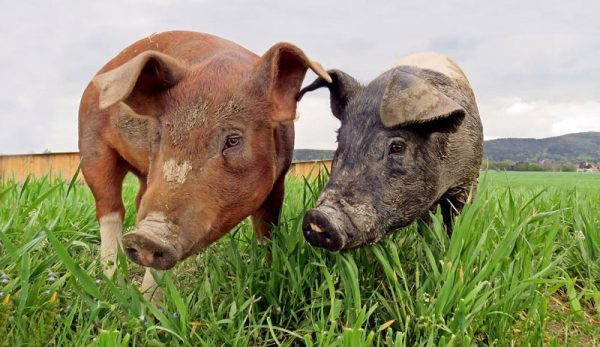 Pigs are just naturally suited to good farming.Â  Really, human landscape management for food and fertility almost requires that pigs be a part of the picture.Â  Their omnivorous appetiteâ€”they’ll eat anything we humans will eat, and they’ll also eat the all parts we won’t eatâ€”is one of the best reasons, of course.Â

But pig reproduction and growth habits play a big role in making them invaluable partners in almost any human food system.

Look at how they reproduce! First, the animals have a short gestation period. Pig farmers like to say ‘Three months, three weeks, three days … and three o’clock in the morning.’

As such, a sow could deliver as many as three litters a year.Â

While such a rate of breeding may place too much stress on a sow’s physiology, a healthy mother pig can easily birth two litters every 12 months.Â  And each litter can number a dozen or more piglets!Â  At that rate, a farmer canÂ  raise just as much pork as he can hustle feed for.Â

Read more: Interested in raising spring piglets? Here’s how you can find some.

All About the Food

Purchased, grain-based feeds cost money, of course. Butâ€”so far, anywayâ€šthey are always there when you need them. With a bought-feed diet, you can raise out as many piglets as you have room for.

But with a farm-raised pig diet, or for folks who are trying to minimize the money they spend on feed, there are limits to how much pig food is available at any given time.Â  This is when it can be a big help to know that pigs can be slaughtered at almost any size.

Slaughter at Any Stage

Each stage in a pig’s development is the basis of some of the world’s best cuisine.

Roast sucking pig, for example, has been a luxury dish for centuries in cultures from Europe to Polynesia.Â  When a mother pig begins to wean her family (thus placing the burden of continuing to feed them on the farmer or homesteader) it may be time to reduce numbers by having a party and roasting a pig.Â

Anywhere from 10 to 50 pounds can be a traditional roast sucking pig.Â

And actually, you can roast a whole animal of any size â€“ you’re limited only by the volume of your oven.Â  Or build an oven in the yard, out of cinder blocks, and then the sky’s the limit.Â  The important thing is that slaughtering one or more piglets now can shift the balance of feed-to-pig towards more abundance â€“ and put meat in the freezer immediately.

Then there’s the porker, the half-grown pig of around 80 to 150 pounds, slaughtered for use as fresh (not salted/cured) meat.Â

Think of the tenderest, juiciest pork chop you can imagine, or the most luscious pork roast. Who could think it a waste to slaughter a half-grown pig when it tastes this good? And reducing the number of pigs on the farm at this point means going forward with a smaller feed bill while you raise larger pigs.

And with so many piglets in a litter, maybe you want to consider offering your specialty meats to some select neighbors. You no doubt know folks whose concern for whole, fresh, delicious and local food is like your own.Â

Demands from the pig pen can get excessive. Remember that fresh young pork can bring a premium price, turning a potential liability into an asset

So by now we’ve raised our litter of piglets for several months. At each stage of the process we’ve been able to harvest meat for our daily meals and for our celebrations.Â  Reducing the number of pigs we raise has kept the feed bills (or the demands on the garden, pasture or root cellar) from exceeding what the farm can carry.Â

Now just a few hogs populate the pasture or pig pen, fattening out for bacon, lard and holiday hams, pork loin, roasts and sausage.Â  Truly, the pig is the crown of homestead meats, at whatever age we slaughter.

And we’d better eat up! Because at the rate our sow produces piglets, there are always more coming.