Tips and Tricks for Using a Sled in Snow

A large sled can be a great tool for hobby farmers in the winter, allowing transport of heavy loads across ice and snow. Here are tips to help you get the most out of your sled. 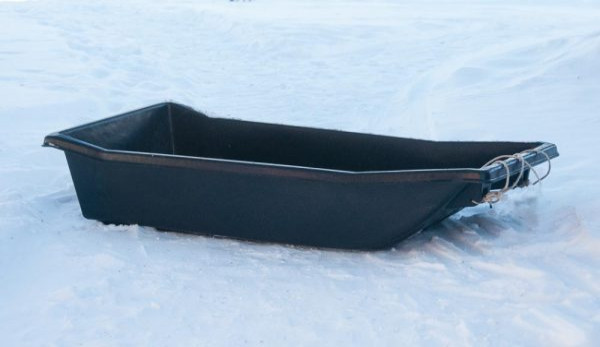 Weāve made it to March! Itās been a long, cold winter where I live, but change is coming and the weather has been warmer latelyāin fact, as I write this, Iām looking out the window and watching snow melting off the roof. Regardless, Iāve had plenty of reasons to use my large sled this winter for transporting hay bales and supplies around the farm. Iāve already outlined why these versatile polyethylene sleds are such a great tool for hobby farmers working in winter weather, and after using them for years, I like to think of myself as something of an expert on proper sled use and maintenance.

If you own a sled like this, here are a few tips and tricks to get the most out of it each winter.

Keep the Bottom Free of Snow

I habitually lean my sled up against the outside of a building when itās not in use so that it wonāt fill up with snow on bad weather days. But while this helps in one respect, it can occasionally cause a problem if the snow is wet and later freezes to the underside of the sled. As counterintuitive as it might seem (why would snow on the bottom of the sled be an issue?), the frozen snow can cause your sled to grind to a halt, making it extremely difficult to slide across the ground even under light loads. Be sure to keep the bottom of your sled free of snow and ice so that it remains easy to use.

When transporting heavy loads, youāll find that maintaining a steady speed helps, particularly if youāre pulling the sled behind an ATV, UTV or a truck. For example, I frequently load my sled with eight or nine hay bales to move them around the farm, and while a load like this is reasonably stable, in bad snow conditions itās not uncommon for a bale or two to fall off the top of the stackāand once in a while, the whole load will tip over. It seems like traveling as slowly as possible would help matters, but Iāve actually found an alternative to be trueāmaintaining a steady pace, not too slow but not too fast, helps the sled ride smoothly over uneven snow and ice conditions and prevents the sled from being pulled to and fro by the whims of changing speeds and bumpy ground.

Be Careful on Slopes

Take care when using your sled on a slope. Sleds are designed to slide, and in the perfect conditions (such as packed-down snow thatās frozen solid in cold weather), thereās no need to pull your sled down a slopeāit will travel down under its own power, sometimes at a rapid speed, which is something Iām quite familiar with because I move a few hay bales down a slope every day. If you need to send your sled down a hill, my advice is to get behind it, give it a good push, and let it slide down by itself. Just make sure itās not on course to crash into anything at the bottom.