Outdoor slumber makes a quiet comeback with a resurgence in popularity for traditional sleeping porches. 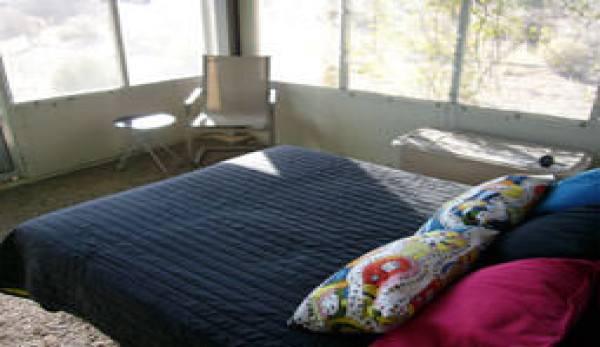 During a trip to the beach when I was still in high school, my friend and I returned from the commotion of the boardwalk arcades to find that my mother and cousin had rearranged our hotel room. They had pushed one of the beds over to the balcony door so they could listen to the waves. ÔÇŽ Thirty-five years later, a similar and widespread desire to connect with nature has led to the revival of sleeping porches.

ÔÇťFrom Florida to New England, Oklahoma to California, Americans are opening up long shuttered second-story porches, adding sleeping porches to new houses or converting first-floor porches into places to snuggle down and snooze,ÔÇŁ writes Dorothy Foltz-Gray┬áfor HGTV. ÔÇťItÔÇÖs a phenomenon fed by sealed-in working quarters and smothering technologies. By the time we end our asphalt commutes, many of us see fresh air as the new gold, something to spend on ourselves, a nighttime extravagance minus the camping trip.ÔÇŁ

Writer-editor Carolyn Hughes currently lives in the mountains of southwestern Virginia but cherishes childhood nights in her vacation house on the Atlantic coast.

ÔÇťWhen I was growing up, my family rented a house at the beach on the Isle of Palms for several summers. Sleeping on the screened-in front porch on those warm nights, with the wind blowing constantly, breathing in the salt air, is a favorite memory! The sound of the ocean is the best lullaby I know.ÔÇŁ

According to a 2008 survey conducted by the National Association of Home Builders, screened porches were desirable or essential for 63 percent of new home buyersÔÇösome 2,300 respondents who had bought a house in the past three years or intended to buy one in the next three years. Stephen Melman, director of economic services at NAHB, says that more than 70 percent of the 2007 ÔÇťHome of the FutureÔÇŁ panel of experts reported that front porches would become a critical feature.┬á ÔÇťFor upscale new homes of 3,000 feet and above, the rear porch would also be a critical feature.ÔÇŁ The panel consisted of about 70 builders, architects and interior designers from across the country.

Time to Sleep
Shelley Perkins grew up in Kentucky, ÔÇťwhere there were a lot of screened porches.ÔÇŁ About four years ago, she and her husband bought 80 acres near Deming, N.M., and built a house with a two-sided, screened sleeping porch off the bedroom. They put it on the west side of the house so it would be shaded from the morning sun. The porch is 12 by 14 feetÔÇöjust large enough for a bed and a couple of chairs.

One of PerkinsÔÇÖ requirements was an elevation high enough to cool things off at night. At 4,350 feet and summer nighttime temperatures in the 50s, the Chihuahuan Desert filled the bill. Perkins and her husband sleep on the porch every night, year-round, ÔÇťexcept when thereÔÇÖs a full moon, which is like sleeping under a spotlight. I sleep like a rock.ÔÇŁ In the winter, the temperatures dip into the 20s at night, so Perkins acquired an electric mattress pad and ÔÇťthe best quality down comforter we could find.ÔÇŁ She especially loves hearing the coyotes.

Perkins speculates that sleeping porches, which offer comfort without air conditioning, might give homeowners a sense of independence.

ÔÇťI guess people are kind of reacting to all the turmoil in our worldÔÇöÔÇśdropping out,ÔÇÖ so to speak,ÔÇŁ she says. Many of us are trying to be more self-sufficient and to rely less on others to provide the necessities.

Barbara Winslow, a partner at JSW/D Architects in Berkeley, Calif., who has been in the business since 1978, has seen interest in sleeping porches increase during the last 10 years. She says that Berkeley has a history of sleeping porchesÔÇöperhaps an expression of an outdoor-focused lifestyle.

Winslow recently worked on a residential project that featured two sleeping porches. The owner wanted living areas that could accommodate overnight guests. Because the house is about 1┬Ż miles inland and gets a lot of rain, the sleeping porches have windows that drop during storms. The upstairs porch has built-in bunk beds, while the downstairs porch is furnished like an office, with a studio couch.

In another project, the sleeping porch is directly off the guest bedroom with a bed that can easily be moved from one to the other. Yet another sleeping porch has a bed on rollers with a track in the floor to facilitate rearranging.
Winslow doesnÔÇÖt have a sleeping porch but sleeps with her windows open year-round. ÔÇťI no longer heat my house at night,ÔÇŁ she says, explaining that she simply sleeps more soundly this way.

Sleeping Outside ÔÇŽ Almost
Matt Myers, a freelance writer for the home-maintenance and remodeling industry and owner of Myers Construction in Fort Wayne, Ind., says that sleeping porches are often a feature of Arts and Crafts or bungalow-style architecture, popular from about 1905 to 1930.

ÔÇťThe porches that are signature on these bungalows are often included in the front and back of the home, specifically on corners to access breezes from all different directions. ÔÇŽ A sleeping porch is often upstairs in many of these homes.ÔÇŁ
According to the University of MaineÔÇÖs Museum of ArtÔÇÖs ÔÇťArchitecture Overview and Activities,ÔÇŁ in India, the British designed bungalows to maximize airflow for reprieve from the exceedingly warm climate. Bungalow style then crossed the Atlantic and reached its height in 1940s American homes.

ÔÇťThe American bungalow is typically one to one and a half stories, has a low pitched gabled roof and wide dormers and porches,ÔÇŁ according to Eastern Illinois UniversityÔÇÖs ÔÇťArchitecture in Coles County: A Timeline.ÔÇŁ

Myrick Howard, executive director of Preservation North Carolina, sees a lot of sleeping porches in Arts and Crafts bungalows and later Victorian homes that have some Craftsman influences. In fact, Howard lives in an old house (built circa 1911) in Raleigh whose sleeping porch had been enclosed. About 10 years ago, Howard opened it up on three sides, replacing walls with windows and screens. He sleeps on a futon in this ÔÇťunconditioned spaceÔÇŁ seven or eight months of the year, retreating only when temperatures dip below 50 degrees F or rise above 75 degrees F┬á(when the humidity gets uncomfortably high).

ÔÇťI find I sleep better,ÔÇŁ he says. ÔÇťMy allergies are much less of a problem away from forced-air heating and cooling. An unexpected benefit is that IÔÇÖm much more attuned to soundsÔÇöcicadas, birds, toads, even trains.ÔÇŁ Another joy stems from a pecan tree about 8 feet from the windows. ÔÇťIt feels like a mountain retreat,ÔÇŁ Howard says.