Raising Eco-Consciousness in Textiles: Think of It as “Slow Fashion”

Should we apply the same environmental and humanitarian concerns to clothing as we do food? A growing number of people think so. 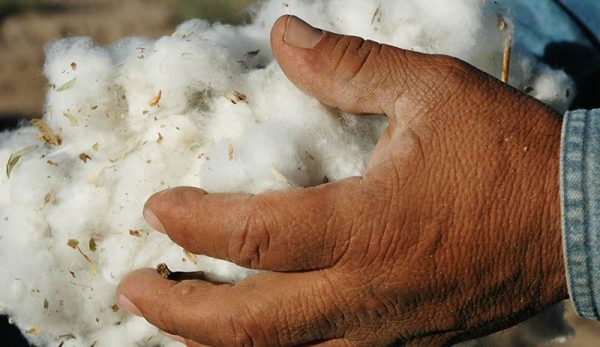 Growing our own clothes is not a relic of an idea from a bygone era. If we are concerned enough about the food we put in our bodies and the environmental effects of our groceries to seek organic, locally grown produce and meat, shouldn’t we also consciously examine our clothing sources?

Consider the fabric that rests on our skin as we work, sleep, sweat and play. Or what material is in the cloth we use to dry our dishes after washing them in biodegradable soap. Who sewed the napkin we use to dab the corners of our mouths as we finish a meal of homegrown salad greens? What about the mattresses, pillows, cushions and bedding that helps us relax after a hard day of weeding our own gardens?

I’m ashamed to say that as I examine the fabrics closest to me, it’s rare to find anything made in my community, even rarer that it was grown without harsh chemicals, made by workers paid a fair wage, or with minimal, nontoxic processing.

It’s heartening, however, to know that conscious consumers are supporting a resurgence of homegrown, clean fiber production, part of which is illustrated by something called the “slow fashion” movement. (More on that below.) If such efforts catch on, there’s a good chance we can clothe ourselves and outfit our homes in safe, healthy materials that have done no harm to people or the planet on their way from the soil to our bodies. Let’s consider some major fabrics as well as their sources and see what needs to change.

The most-used fabric in the world, cotton, is also the most chemical-laden. In some cases, as many as 1,000 chemicals are used on the crop during all its life stages and processing. Eight of the top 10 most-used pesticides on U.S.-grown cotton are classified as moderately to highly hazardous, and U.S. regulations are stricter than those of many other countries. Organic cotton (shown above) is a viable option, albeit small in comparison at this point. In 2015, 8.6 million acres of conventional cotton was planted, whereas in 2016, 20,681 acres of organic cotton was grown. Organic cotton includes the nonbleached, natural tones as well as material that is whitened with peroxide. The organic label refers only to the field practices, such as attention to the soil. It’s estimated that soil erosion potential is reduced by 26 percent in organic over conventional cotton, and organic cotton requires 62 percent less energy inputs to grow.

My grandmother’s grandmother made and hand-dyed a rug from homegrown wool on her farm at least 150 years ago. I still use it, and it’s still in good shape. Wool possesses amazingly durable qualities including fire resistance, the ability to retain its shape and stain resistance. The term “wool” covers fabric made from fleece of sheep as well as goats, alpacas and rabbits. On tours of her alpaca farm in Richmond, Kentucky, Alvina Maynard explains that the slow fashion movement is the clothing industry’s version of the slow food movement, prioritizing the health of workers and environment ahead of the quick and the cheap. Her alpaca wool is spun into clothing that will last a lifetime or more, and it includes items as disparate as fashion-savvy hats and superabsorbent warm socks. In addition, this farmer tries to waste nothing, nourishes the soil, plants for pollinators and leads camps teaching kids to value the natural cycles on a farm.

Archeological evidence that flax was spun into fibers dates back approximately 30,000 years. Linen, the most common garment made from flax, wrapped ancient mummies in their tombs. It has been the subject of iconic Dutch paintings of peasants, and linen thread is the basis for the common word “line.” It was such a mainstay, but flax seemed to have faded into the background as cotton and synthetics took over clothing markets.

But flax is making a comeback with the help of eco-savvy farmers. Take Angela Wartes-Kahl, for example. She’s an Oregon farmer who also works as an organic certifier, and she serves as the vice chair of the Organic Trade Association Fiber Council. Flax is a new enterprise for her but she’s leading an effort to raise its status. Flax uses extend beyond clothing and into insulation and even plastics. The fiber is two to three times tougher than cotton and not easily cut by machine, so a lot of the work is done by hand, for now. Some European countries have commercial means of harvesting flax that American farmers are researching to improve their techniques.

The hemp landscape keeps changing. Here in Kentucky, more than 600 people are scheduled to attend a networking meeting this fall to connect farmers with processors and researchers. That’s a huge leap from 2014, when only a handful of pilot programs were launched. Now hemp is once again legal to grow in 39 states. It’s already being called a commodity, which brings different baggage as well as benefits than it would staying on the fringe. As mainstream America embraces the medical benefits of hemp, one of the biggest hurdles to fiber production is the lack of processing equipment. Fibershed is a group researching human-scale, appropriate technologies to keep hemp fiber a safe and healthy industry. It is experimenting with various machinery for preparing the fibers in addition to blending recipes of hemp and wool fibers for weaving into cloth.

Beware of any products that claim to be made of bamboo fabric. Most of it is rayon, which is made of fibers chemically extracted from wood pulp and processed heavily, not necessarily in environments safe for workers. The Federal Trade Commission enforced laws against “deceptively describing rayon clothing as bamboo” and calls out major retailers who had been warned and then fined for not truthfully labeling their products.

Proper labeling is essential for consumers to have confidence that their purchases have been vetted. While the USDA Organic label might stir cynicism around leniency in recent agency policy decisions, it is still the strictest standard applied nationwide to crops. Between the farm and retail store, however, a lot of chemicals and unethical business practices can happen. The Global Organic Textile System fills the gap and is the textile industry’s equivalent (or perhaps superior) version of the field certification. The group watches and verifies that at least 70 percent of materials used in a product are certified organic and that they meet other strict environmental criteria, including the presence of proper wastewater facilities.

This short film explains the ecological and social responsibility standards to which the Global Organic Textile System holds producers.

If you can have a conversation with the person who is raising your fiber organically, thank that individual and buy one of her or his expensive scarfs, rugs and cloth napkins. Unlike most products in our society, these will outlive us. Like Alvina the alpaca farmer told a group of textile and marketing students who toured her farm, “You’re the ones who are going to influence change. Because the real way, in capitalism, that change happens is when people start spending money on it.” She shared her shock upon learning that a t-shirt can cost as much as $60. “Yes, buying a t-shirt that costs $60 sounds ridiculous to someone who is broke … but I’ll be darned if I don’t have a $60 t-shirt that has lasted me a decade.”