Slow Money: Growing Farm Businesses from the Ground Up

Only three years into the movement, Slow Money has provided startup capital and loans to farmers across the U.S., and their opportunities continue to grow. 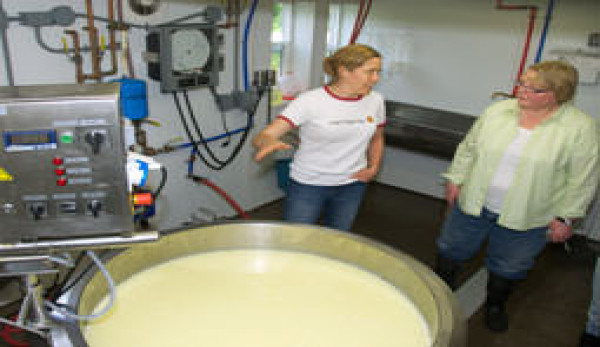 To ask Stephen Hueffed to name the best cheese his farm, Willapa Hills Dairy and Farmstead, produces is like asking him to choose his favorite child.

“I definitely love our sheepŌĆÖs-milk cheese,ŌĆØ he says, but continues to tout a number of products that are dear to him and the heart of his business, including a cheese from a sheep-cowŌĆÖs milk blend named “Two Face BlueŌĆØ and a new hard-aged Pecorino Romano. But somehow he always returns to the sheepŌĆÖs milk cheese.

Ten years ago, with a job in nonprofit management, Hueffed and his wife, Amy, decided to follow their dream and start a farm. “I wanted to be on a farm and be more intentional [about the way we were living]ŌĆöbuilding something for my family,ŌĆØ Hueffed says.┬Ā

Within three years, the couple acquired some land in Doty, Wash., some sheep and a 100-gallon vat and began making cheese. But just as their business started, the economy tanked and the business plateaued.

The Slow Money Solution
Hueffed is not alone in the financial challenges heŌĆÖs faced getting his farm business started. According to a report released at the end of 2011 by the National Young FarmersŌĆÖ Coalition, an overwhelming 78 percent of beginning farmers rank lack of access to capital as their greatest farming challenge.

“WeŌĆÖve been on our farm for seven years, so we figured some things out but were still pretty new. Without the track record in the industry or multiple years of profit, you canŌĆÖt get a loan,ŌĆØ Hueffed says.

Where he thrived, however, was connecting to a local investment group called Slow Money Northwest. Wanting to expand his cheese business, Hueffed pitched his business plan, which included the need for new processing equipment (i.e., a 650-gallon vat), to a group of investors interested in funding local farm and food businesses.

“We had interest from a couple people, and one was a farmer who was interested in funding another farming business,ŌĆØ he says.

And thatŌĆÖs how the idea of Slow Money works.
┬Ā
Slow Money (like the perhaps better-known organization Slow Food) is a countercultural, grassroots approach to food systems; instead of diversifying and preserving local products, Slow Money aims to diversify and localize financial markets that invest in local, sustainable farm businesses and food enterprises.

The movement grew out of the 2009 book Inquiries into the Nature of Slow Money, by Woody Tasch, who for a decade chaired the InvestorsŌĆÖ Circle, a network of angel investors, family offices and social-purpose funds and foundations that support sustainability ventures and venture funds. In just three years, the Slow Money mantra translated into 12 local investment groups across the U.S., as well as national and international branchesŌĆöand thereŌĆÖs no holding back these investors.

Slow Money from Coast to Coast
Slow Money Northwest, the investment group that helped Willapa Hills expand its artisan cheese distribution into California, is already diving into new programs in 2012 to connect like-minded investors with small-farm businesses. The groupŌĆÖs New Farmer Loan Fund is designed to help small-scale farmers overcome hurdles, such as lack of three-year financials, collaterals or small loan requests, in order to obtain the capital they need to jumpstart their businesses.

“We start from the idea that new farmers need help, and [figure out] how we can give them money,ŌĆØ says Tim Crosby, SMNW director. “We donŌĆÖt want to administer loans. That takes time, and IŌĆÖm not out to be the bad guy.ŌĆØ

Instead, the investment group helps credible new businesses (i.e., those determined likely to turn a profit) obtain loans with guarantees backed by promissory notes. The businesses are screened by the SMNW investment group and are required to participate in a production-skills or business-education program. Ultimately, the goal is to allow investors the flexibility to support the food enterprises they believe in.

“Right now itŌĆÖs all social returnŌĆönot a direct investment,ŌĆØ Crosby says, referring to the investorsŌĆÖ personal commitments. “In many instances [with loan guarantees], investors can get an interest rate back, but we found folks who were able to do it without a financial return. ŌĆ” People want to help one way or anotherŌĆöthey really care about these issues.ŌĆØ

Slow Money, by its very nature, seems to be effecting changes on the local level, but according to Crosby, itŌĆÖs not SMNWŌĆÖs activities alone that are going to make a major difference for small-scale farmers.

“We are beginning to see traction in other parts of the country,ŌĆØ he says. Indeed, Slow Money investment groups have sprung up in places like Maine, California and Colorado.

National Scope
Investment opportunities are percolating on the national level, too. This year, Slow Money merged the concepts of philanthropy and investment to make it possible for anyone to financially support their local food system. Through a program called the Soil Trust, community members can donate small sums of money, which are pooled together to provide loans to small-scale farmers and food businesses.

“WeŌĆÖre asking people to donate at $50 levels so we can turn that into investable amounts,ŌĆØ says David Corson-Knowles, Slow Money associate director. “Anyone can give to the Soil Trust.ŌĆØ

The idea of the Soil Trust is to offer farmers a funding alternative to grants. According to Corson-Knowles, typically only about 5 percent of a foundationŌĆÖs budget is used to provide grants, while the rest is invested in companies that contradict their giving goals. So a foundation investing in your small farm could also be handing its money over to big-ag operations. Soil Trust aims to make their investments 100-percent mission-drivenŌĆöin other words, allow investors to put their money where their mouths are.

So far, the Soil Trust has acquired $100,000 from individuals and businesses who value small farms and food businesses. Their first investment was made to The Carrot Project, which finances small-farm projects in Massachusettes, Maine and Vermont.

Sustainable Investments
While the idea of value-driven financing sounds warm and cushy, is it sustainable? According to Slow Money advocates, the answer is yes.

“It works well because the lender and borrower meet, filling a need that small local banks used to fill,ŌĆØ says Carol Peppe Hewitt, of Slow Money North Carolina. She continues, “WeŌĆÖre going to need to be ŌĆścommunity capital specialistsŌĆÖ so that when someone comes to any of us, we can help them put together a comprehensive array of community capital options. It doesnŌĆÖt all have to come from one place. We can get really creative here.ŌĆØ

Slow Money looks to the┬Āsoil itself for a model of how to build a sustainable financial market. Just as the soil requires that farmers supplement nutrients removed through the growing process, the economy requires the same give and take to remain strong. Hueffed already has plans to return the favor shown to him by Slow Money.

“Slow Money was an amazing opportunity and I think the spirit of it is right on,ŌĆØ he says. “If we can continue to move in a successful direction, I hope I am in the room funding some startups 10 years from now.ŌĆØ