When caring for a small farm, you don’t necessarily need large tractors or implements; smaller no-till and traditional tillage implements could be the best bet for your property. 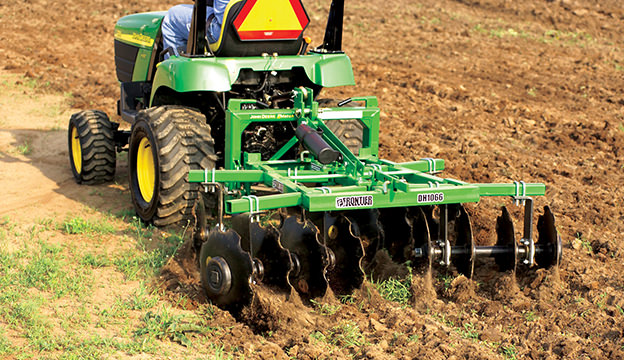 Caring for a small farm is a unique situation—you don’t necessarily need large tractors or implements. Check out these smaller no-till and traditional tillage implements to find what’s best for your property.

No-till farming is defined by the Department of Soil Science at North Carolina State University as “the practice of leaving the soil undisturbed from harvest to planting except for nutrient injection. Planting or drilling is accomplished in a narrow seedbed or slot created by coulters, row cleaners, disk openers, in-row chisels, or rototillers. Weed control is accomplished primarily with herbicides.” No-till farming is taking agri-biz by storm, yet it has small-farm applications, too.

The concept of no-till agriculture is nothing new; it’s been utilized since man first scratched the earth and dropped in seeds. The ancient Egyptians, the Sumerians, and the Incas of South America used sticks to poke holes in the ground and put seeds into unprepared soil by hand; they covered the seeds with their feet. That’s no-till agriculture at its simplest and it’s the way things were done for a very long time. The reason was simple: Without modern plows to turn and mix the soil, it was the most efficient way of planting crops.

A basic, animal- or human-drawn, wooden plow called an ard (or scratch-plow) was developed in Mesopotamia between 4000 and 6000 B.C. It’s still an important tool in parts of the world today. An ard consists of a frame holding a vertical, wooden spike that’s dragged through the topsoil to gouge a narrow furrow along the plowed path. The ard leaves a wide strip of undisturbed earth between the rows—exactly like today’s no-till implements.

Plowing became more sophisticated in the Middle Ages with the invention of the moldboard plow (featuring a metal cutting-blade called a coulter) and the harrow. Using a new-fangled harrow attached to the moldboard plow, man began turning dirt instead of making a groove in it.

Time passed and the plow became a symbol of modern agriculture. However, in the early decades of the 20th century, it became evident that large-scale tilling of the earth was contributing to widespread soil erosion. For instance, the Dust Bowl days of the 1930s were caused by a combination of environmental and manmade factors, including extensive plowing.

According to the Pennsylvania Nutrient Management Program handbook, Better Soils With the No-Till System (download it at http://panutrientmgmt.cas.psu.edu/em_publications.htm), there are two broad categories of tillage systems used in the world today: conventional tillage, which leaves less than 30 percent crop residue cover after planting, and conservation tillage, which includes all tillage systems—including no-till—that leave more than 30 percent crop residue after planting. No-till is better for both the Earth and the farmer for numerous reasons:

However, no-till farming isn’t right for every farm and every application. In many cases, chemicals are used in lieu of cultivation; it takes considerable retraining and trial-and-error to convert to no-till farming; the cost of a no-till drill (the no-till implement used for planting) can be quite substantial; and it doesn’t work well in certain situations and some soils.

So, where does this leave you, a hobby farmer, if you’d like to incorporate conservation tillage into your farming? Before making decisions or buying equipment, discuss no-till as it applies to your farm and your needs with a representative of your local conservation district (see www.nacdnet.org), your county extension agent or a no-till alliance in your region (you’ll find some listed at www.no–till.com).

If you already have a conventional drill you’d like to retrofit for no-till applications, Acra Plant’s Acradrill ADU Unit might be just what you need; it can be easily adapted to fit most three-point drills and air seeders. Features include VARIjust depth control and the long-lasting ACRATuff V-Slice Insert for precise seed placement; easily adjustable press wheels in two sizes to match existing soil conditions; self-cleaning, 11- and 15-notch, 15-inch discs to aggressively chew through crop residue; heavy-duty spring units to adjust down-pressure; and adjustable row widths down to 7 inches wide.

If you’re looking for a compact unit ideal for hobby-farm applications, consider Modern Habitat Solutions’ Firminators, a lineup of three-in-one implements that disc, seed and pack, and that can be use for both no-till and conventional applications. While the Firminator (and units like it) is marketed primarily as a wildlife food-plot implement, these multi-use tools plant pasture, large gardens and lawns with ease. The ATV/3 Point Combo Firminator can be pulled by a 500cc or larger ATV or a 20-hp or larger tractor. Ag-quality cultipackers, adjustable disc angles, disc blade scrapers, a center-ripper shank and the company’s exclusive Accu-seed system are a few of its stellar features.

When no-till isn’t right for your needs, consider compact, conventional tillage implements you can pull with your small tractor or ATV instead of a big, gas- or diesel-guzzling farm tractor.

When you’d rather not put all of your eggs in one basket, individual, hobby farm tillage implements are a logical choice. For most small-scale applications, you’ll need a plow or disc to break up earth prior to planting and a cultipacker (an implement that crushes dirt clods, removes air pockets and presses down small stones to form a smooth seedbed; it also firms soil around the seeds, ensuring shallow seed placement and proper seed-to-soil contact) to use before and after planting.

Whether you investigate no-till or stick with conventional tillage for your farm, there are plenty of Earth-friendly solutions to choose from.