Small Farms Are Perfect For Raising Pigs On Pasture

Pigs raised on pasture are healthier, happier and better tasting. Here's what you need to get started with hogs on your hobby farm. 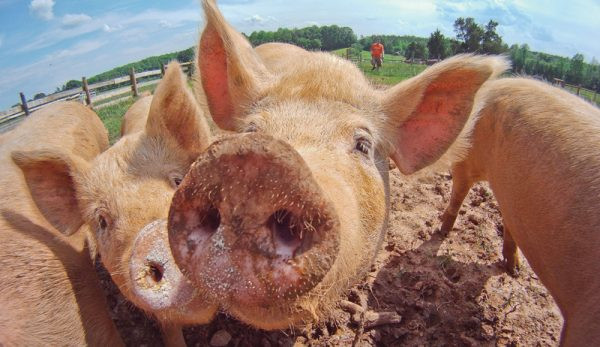 Whether seeking out a single farming enterprise or a way to diversify your operation, pasture pigs can make great additions to a small farm. Popular pasture pig breeds include the Idaho Pasture Pig, Kunekune, Large Black and Tamworth.

Outside of producing pork for home use or sale, you can also use pigs for clearing brush-filled areas, rototilling gardens during the winter months or even sealing shallow ponds.

One significant lure of raising your own pigs is the amount of control you can exact over what, from feed to medication, goes into your animals.

‚ÄúYou‚Äôve got the ability to raise these pigs the way you want them to be raised,‚ÄĚ says Jodi Cronauer, registrar of the Idaho Pasture Pig Registry. Cronauer raises Idaho Pasture Pigs and Kunekunes on her Wisconsin-based White Bison Farm. You can choose, for example, what vaccinations you will use, if any at all, and how to address deworming.

Another reason is the improved taste of the meat. Fans of pasture-raised, heritage-breed pigs claim that their meat tastes far superior to that of pigs raised commercially. And the hogs themselves benefit from being raised outdoors on a nutrient-rich pasture.

If you are convinced that raising pigs is for you, the first step includes assessing your property to assure it‚Äôs a viable operation.

Heritage breeds, such as those mentioned, prefer forest or pasture areas. Forested areas should have available fruits, acorns and nuts, collectively known as mast. Any area you are considering should also have available water sources for hydration as well as areas where wallows will develop for cooling.

If these areas are available on your property, can they be fenced?

Finally, ask yourself if you have enough land that you can rotate pastures to prevent soil erosion. A variety of factors influence land requirements. You can consult your county extension agent or soil conservation service about your specific needs.

Because of his location, Bill Wehlage of Bacon Acres Farm in Oklahoma requires a larger area for his pigs.

As long as there is availability, type of grass isn‚Äôt as big of a concern.

‚ÄúThe thing about pigs is anything with more of a broadleaf mixture is going to be better for them,‚ÄĚ says Jason Johnson, who raises Large Black pigs on his Lucky George Farm in Iowa. ‚ÄúIt‚Äôs going to improve their ability to digest.”

Johnson also prefers to have some clover in the mix. If necessary, pigs can also be fed hay. Grass hays mixed with properly harvested alfalfa are preferred over timothy.

Read more:¬†Can you feed your hogs hay? Sure‚ÄĒhere’s what you need to know.

There are key differences and similarities among the breeds. ‚ÄúWe wanted pigs that would do very well with the kids,‚ÄĚ Johnson says. ‚ÄúFor pigs, they [Large Blacks] are one of the most docile and easy to manage. It‚Äôs not all about the look. Large Blacks are good on pasture with marginal forage.‚ÄĚ

‚ÄúWe find them to be very hearty, sound in feet and leg, easy breeders, great mothers, and easily trained to electric fencing and nipple waters,‚ÄĚ he says. ‚ÄúThey also have an excellent feed conversion rate for a heritage breed and are very tasty and lean.‚ÄĚ

Cronauer is equally enthusiastic about her Idaho Pasture Pigs and Kunekunes. She touts that she can‚Äôt think of another breed of pig that grazes as well as these. She also says that both breeds are very friendly. Size-wise, Kunekunes are slower-growing, smaller pigs that tend to be better producers of lard.

‚ÄúI always say look at a pig as if you are going to eat it,‚ÄĚ she says. ‚ÄúYou want a pig with a nice long back, big butt and nice front shoulders so you can say ‚Äėlook at what we are going to get off of this pig.‚Äô‚ÄĚ

Regardless of whether or not you choose to resale packaged pork online from home, locally at a farmers market or even if you are raising pigs for your own food source, you‚Äôll need to locate a processing facility.

Any pork sold not on the hoof must be butchered and packaged at a USDA processing plant. Requirements are slightly less stringent when butchering and packaging for home-use alone.

One of the many benefits of pasture-raised pigs is that the required infrastructure is minimal. ‚ÄúA few pigs can live in a crude hut or shelter,‚ÄĚ Wehlage says. ‚ÄúIn the summer, many of our pigs have no shelter at all as long as they have shade from trees and good mud holes.‚ÄĚ

Johnson takes a similar but slightly different approach. ‚ÄúYou have to have some sort of shelter, but that can be made from a lot of different types of things,‚ÄĚ he says. ‚ÄúYou can take a cattle panel and bend it and put a tarp over.‚ÄĚ

For her operation, Cronauer makes use of A-frame shelters year-round. The shelters can also be used for farrowing. She feels that the design of the A-frames helps to position the sow during farrowing and prevents the piglets from getting laid on.

As for fencing, different types have advantages and disadvantages. For example, panels can work well but can be burrowed under. The general consensus among those that raise pigs is that electric fencing is the most economical.

‚ÄúIf you have five pigs on 10 acres, that‚Äôs going to be a big enough space that they are not going to get bored and try to break out,‚ÄĚ Johnson says.

Smaller lots will require fencing that the pigs will respect. Pigs have to be trained to an electric fence or they will run through it. Electric fencing should be approximately 6 inches off the ground to prevent pigs from escaping under it.

Read more:¬†Check out these ‘pig-richment’ ideas to keep pigs engaged during cold months.

Cattle or horse trailers are the preferred method for transporting pigs for processing.

‚ÄúA week before the big move, begin to feed the pigs in the trailer,‚ÄĚ Wehlage says. ‚ÄúThe morning they go to the processor, they will hop right in. The rule of thumb is that you can‚Äôt get in a hurry with pigs. Take your time. And plan how to make them ‚Äėwant‚Äô to go where you need them to go.‚ÄĚ

According to Wehlage, pigs perform best when fed a consistent diet that includes 14 to 16 percent protein, with a good nutritional pack mixed in. Different age pigs have various nutritional requirements, but small farms may settle for a standard ration.

Non-GMO and organic feeds can be a good option, but they are expensive. Local feed-supply stores often offer a comparable and more affordable bagged feed option. To keep feed bills in check, Wehlage emphasizes that it‚Äôs time to begin looking at bulk feed options when you reach a sustained herd of more than 12 hogs.

Wehlage cautions against over dependence on scraps and slop. ‚ÄúInconsistent diets affect digestion and therefore growth, adding fat to carcasses that make no money,‚ÄĚ he says. He also warns about the potential biosecurity risks involved if scraps and slops are obtained from gathering cull vegetables or restaurant trash bins. (Infected humans can pass viruses to pigs.)

Although pigs raised on pasture do ingest a great deal of the minerals they need from the soil, they may also need supplementation. To accommodate, Johnson supplies mineral blocks. Pigs usually manage well with a mineral block as long as free choice water is available.

Because pigs can develop a salt toxicity, Cronauer has concerns about providing minerals via a block and instead prefers to mix her own.

‚ÄúBut what‚Äôs happening is as they‚Äôre doing that, they‚Äôre getting more and more salt and other minerals coming with it and because they have a salt toxicity they can get very, very sick and can eventually die.‚ÄĚ

Most commercial pig waterers are designed to raise pigs on a scale. Rather, because pigs are notorious for their destructive capabilities, large rubber bowls are often the preferred method for delivering water on small farms.

‚ÄúThey can turn these over, stand in them, chew on them, and they won‚Äôt break them,‚ÄĚ Johnson says. ‚ÄúThey work great for feeding, too.‚ÄĚ Cronauer uses a 55-gallon drum on her farm with a gravity-fed nipple on the end that the pigs are trained to use.

Many small farms prefer not to vaccinate their pigs. ‚ÄúOur pigs do build up a natural immunity,‚ÄĚ Cronauer says. ‚ÄúThey don‚Äôt very often get sick.‚ÄĚ

Instead, when her animals do get sick, she treats with a broad-spectrum antibiotic. In addition, buyers of breeding stock often prefer to establish their own vaccination and deworming protocols. The cooperative extension service, however, recommends vaccinations dependent upon the pig‚Äôs age and use.

Pigs can be dewormed orally or with an injectable solution according to their weight and the type of worm you are attempting to control. One common dewormer is doramectin for the treatment of gastrointestinal round worms, lungworm, lice and mites. Others include ivermectin and fenbendazole.

To avoid resistance, it‚Äôs best to periodically rotate among the drug classes.

Whenever dewormers are used, always observe appropriate meat withdrawal periods according to the label. For those opposed to deworming, there is anecdotal evidence that some natural products can help to control but not eradicate worms.

Cronauer deworms with ivermectin twice per year‚ÄĒin the spring before the piglets start arriving and in the fall after the sows have had their last litter for the year.

Piglets have needle teeth that require monitoring for possible clipping should they cause injury through the biting or scratching of their littermates or the sow‚Äôs udder. In addition, pigs will generally require periodic hoof trimming.

The frequency depends on the individual pig.

Finally, boars are sometimes castrated. Producers can be trained to perform each of these skills, or they can be completed by a veterinarian.

Read more: From farrowing to farmers market, here’s your guide to keeping pigs.

Because they know their pigs so well, many who raise pigs on a small scale find identification methods such as ear tags or notching to be unnecessary. Others will tag pigs with specific types of tags to designate pig lines.

Outside of tagging, other recommended types of record keeping include:

Certain forms must be completed if the pigs are to be registered with a breed registry. They will also need ear notching or tags, as well as DNA typing.

Pigs raised on pasture do take longer than those raised commercially to reach slaughter weight. Though Kunekune pigs are typically butchered at a smaller size, the average weight at size of butchering is around 250 pounds.

The time to reach this weight can range, on average, from seven to 10 months depending upon the breed and grass-to-feed ratio in the pig‚Äôs diet.

Large Black pigs can take up to a year or more to reach the desired size. By comparison, hogs raised commercially can reach slaughter weight in around six months. When raising pasture pigs, it is best to focus on the quality of the meat rather faster growth rates.

While raising pigs isn‚Äôt for everyone, they can be an enjoyable addition to your small farming operation.

This article originally appeared in the July/August 2020 issue of¬†Hobby Farms¬†magazine.