Pest In The Nest: How To Control The Small Hive Beetle

The small hive beetle is a tiny pest but should not be underestimated. While not devastating in itself, it can contribute to colony collapse. 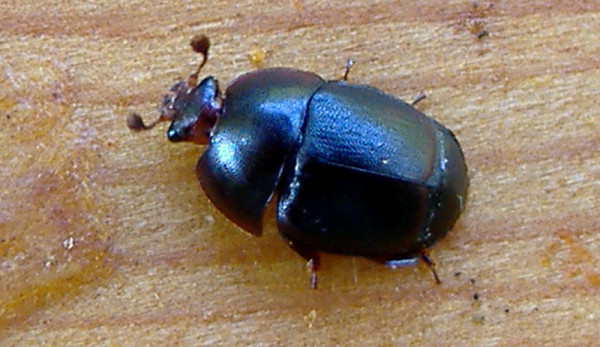 When you took up beekeeping, no one told you that, in addition to tens of thousands of honeybees, you’d be managing a hive full of mites, moth larvae and beetles, did they? It’s OK if you’re wondering: “Did I sign up for this?” In reality, management of the populations of these insectsâ€”rather than complete eradication, which is unrealisticâ€”is part of the process of properly managing honeybees. Honeybees, like all of us, coexist with other creatures. Unfortunately for us (and the bees) not all of these cohabitants are benevolent. Which brings us to the small hive beetle, sometimes called the SHB in beekeeper talk.

What Is The Small Hive Beetle?

This tiny black bug originates in Africa and started cropping up in North American honeybee hives in the mid-1990s. It started in the Southeast and has since spread over much of the continent despite cooler weather in some states, which doesn’t seem to bother the species. A most interesting facts about the small hive beetle is how it travelsâ€”it takes to the air and can fly for miles at a time, sometimes tagging along with a swarm of bees. Once the beetles are in the hive, honeybees will chase them into corners, attempting to push them out. The beetle has even adapted to mimic the honeybee’s request for food, so worker bees within the hive will actually feed the captive beetles. Fortunately for the small hive beetle (and unfortunately for the bee), the honeybee’s stinger can’t penetrate the pest’s exoskeleton.

Is The Small Hive Beetle Dangerous?

Small hive beetles will lay and hide their eggs within the honeybee brood comb. While the beetle larvae don’t destroy the comb the way wax moths do, they will consume the honeybee larvae, weakening the colony’s population. A yeast in the beetle’s droppings causes honey to ferment and ooze out of the hive. If any of these things happen and become too overwhelming for the bees, they could abscond the hive.

The small hive beetle is not life-threatening to a single bee or her entire colony, per se. It is truly more of a pest and a nuisance. However, when coupled with other stressors, such as high varroa mite populations, excessive swarming or a honey shortage known as a dearth, an infestation of small hive beetles can push a weak colony over the edge into collapse. For this reason, it’s best to take a holistic approach: Inspect often, monitor population levels and intervene if necessary.

What A Beekeeper Can Do

Beetles nest in the ground, and they prefer moist conditions. Place your hives in a sunny location, particularly if you’re beekeeping in the Southeast. Inspect often and monitor the small hive beetle populations: If you see more than a dozen, consider putting a beetle trap in the hive to reduce the population. The aim is to weaken the beetle population so the bees can manage it more effectively. Anything you can do to help the bees goes a long way. The small hive beetle isn’t one of the more devastating pests or diseases, but it can be the downfall of a colony if conditions are right.