That Smell Can Mean Only One Thing

It's skunk mating season, and everyone can smell it. 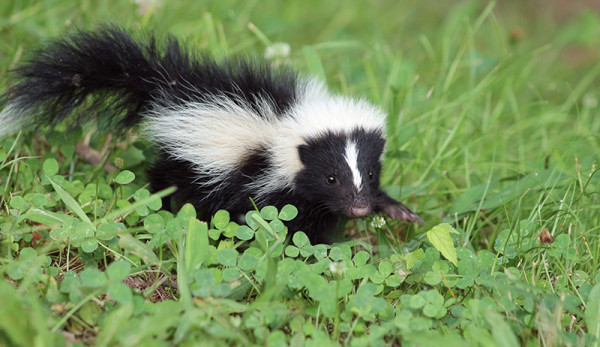 This time of year, a certain odor drifts into the air. I noticed it when living in the city, but it’s become more of a pronounced presence now that we’ve moved to the farm. The smell isÂ skunk.

Starting inÂ early January and running through March, skunks emerge from their winter rest for mating season. The evidence of their arousal is clear: You can’t miss that musky stench they emit and, well, there’s the black-and-white roadkill that speckles the roadside. We pass at least five or six every day on our 40-minute commute to workâ€”even if you didn’t know that mating season was upon us, you would be able to tell something was up.

What you see on the side of the road are most likely male skunks. The females typically stay within a half mile of their dens, while the males go on the prowl. As polygamous creatures, male skunks don’t settle down with the family, so they’re most likely to traverse roads, and, well, you know the rest of the story for the particularly unlucky ones.

But that end-of-winter eau de toiletteÂ doesn’t come just from the roadkill. While skunks typically don’t emit their spray unless threatenedâ€”and especially not on other skunksâ€”the males make an exception this time of year and will target romantic competitors with their musk.

Around these parts, it’s the striped skunk (MephitisÂ mephitis) that we see. We haven’t had too many personal run-ins with them, though we have seen one or two traipsing about the yard. I’ve heard skunks can be quite a nuisance if they find their way into your garbage or outbuildings, but for now, they are just one of the many fascinating creatures we have the pleasure of observing and learning more aboutâ€”as long as one of them doesn’t set up Â a den in our shed!