Social Media Reunites A Beer-Loving Pig With Its Owner

A beer-loving pig displaced by the Fort McMurray fire was reunited with his owners earlier this week thanks to the power of social media. 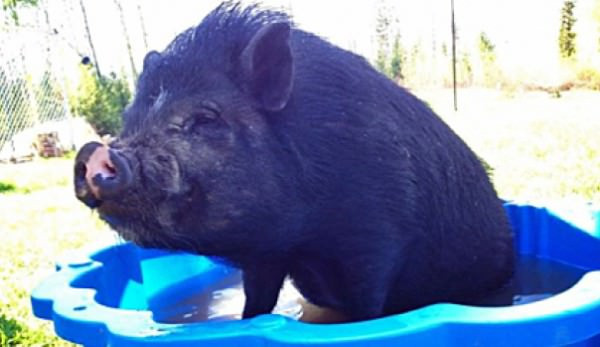 Some good news has emerged from the Fort McMurray wildfire in Alberta, Canada for one family: their four-year-old pig, Marshall, has been found safe and sound.

Forced to flee her home in the Waterways neighborhood at the sight of the approaching flames, Michelle Coutu was able to escape with her daughter, grandchildren, and dogs, but was unable to take Marshall with her, much to her dismay. Coutu told CBC News, āAll I could do is let Marshall out of his pen and put some food down for him and pray for the best.ā

Coutu placed an ad on the Fort McMurray Animal Rescue site, hoping that someone would recognize her beloved pig. When the Alberta RCMP Twitter account posted a photo set that included a pig being lured to safety with watermelon, many members of a Facebook group dedicated to rescuing animals lost in the fire recognized Marshall from Coutuās ad and alerted her.

Coutu knew it was Marshall right away: āYou can always pick out your kids,ā she said. āHe has the white tip on his tail. In the picture, you could tell he was a little bit hesitant to get the watermelon ā¦ but definitely he’s not going to turn down a treat.ā

And Marshall certainly loves treats. Coutu suspects that after they left, Marshall likely wandered to the neighborsā in search of empty beer cans. āIf you open a beer, he loves his beer. You cannot put your beer down because you won’t have a beer afterwards,ā she said.

Coutu looks forward to reuniting with Marshall, who is being looked after by friends and animal custody in the meantime. So far, hundreds of animals have been rescued from the fire, and officials are asking that anyone still looking for their pets fill out this Emergency Pet Rescue Request form. Letās hope there are more happy endings like Marshallās!