Recently, Italy celebrated the Festa Della Liberazione in honor of the day in 1945 when Italian partisans finally liberated Milan and Torino from the Nazi and Fascist troops. 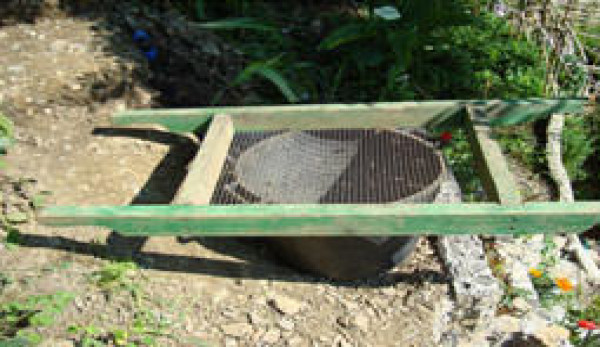 Recently, Italy celebrated the Festa Della Liberazione in honor of the day in 1945 when Italian partisans finally liberated Milan and Torino from the Nazi and Fascist troops.

Me, Iāll be busy today liberating another piece of my garden from the Rock and Stone troops.

I adore all my garden tools, and I think one of the reasons I like gardening is because I like having an excuse to work with my hands and use tools.Ā

Two of my favorite tools are my soil sifters.Ā  There are a whole lot of rocks in the soil where Iām building my garden.Ā  I frequently need to dig down to the bedrock, and I do encounter many areas where thereās more rock than dirt.Ā

This means that a lot of my time is spent trying to separate the rocks from the dirt.Ā  I need the rocks as building materials for all the walls and steps, and I need the dirt to fill back into the terraces once Iāve built the retaining walls.Ā  The big rocks I can separate by hand.Ā

To clean up the dirt, I pass it through my big green sifter.Ā  The resulting dirt falls into the big bucket below, and the rocks and gravel stay on the screen.Ā  I use the gravel to cover the pathways in many places, and this lets me harvest in the garden even when itās wet.Ā Ā

I have a smaller sifter too, with a smaller mesh.Ā  When I need really nice dirt for seedlings or potting, I use the small screen to remove even the smaller rocks.Ā Ā

I frequently mix steer manure in with the dirt when Iām passing it through the screens, as that adds both organic material and a bit of nutrition to the resulting soil mix.

Our HF editorsā blogs are starting to get some reader mail, which we greatly appreciate.Ā  Several readers have asked how I ended up in Italy, so, hereās the short version:Ā

I also work in the computer games industry and had the good fortune to make a few well known games.Ā  I was recruited to work in several foreign countries, and I did start thinking that I might enjoy living in Europe for awhile.Ā

In 2000 I accepted an offer to fly me to Italy for an interview, never really considering that I would accept that job, thinking instead that would get a free vacation in Italy and then job hunt on the way home in Belgium, which has a tremendously attractive agricultural industry.Ā  I think they are even more tractor crazy than the US.

But once the plane landed in Italy I immediately felt strangely comfortable, even in this strange world that is so different from California.Ā

At the interview I ended up getting down on my hands and knees and begging for the job.Ā  I got a special hard-to-get visa because of my computer game development skills, moved to Italy the following month, and Iāve been here ever since.Ā  Cool huh?