Solar fence chargers can be a great option for powering small-scale electric fences, but as with most technology, there are pros and cons to consider. 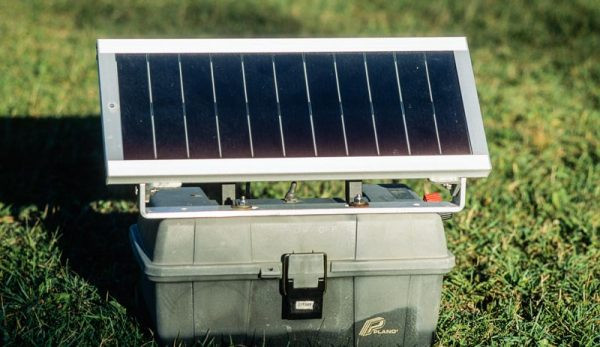 For many hobby farmers, electric fences are the best choice for enclosing livestock pastures.

Not only are they considered safe and effective, theyâ€™re among the least expensive fencing options. That’s a big plus for budget-conscience farmers.

You can potentially save even more money by investing in a solar fence charger. Getting a solar-powered unit allows you to go off the grid and harness the energy of the sun to power your fence.

Sounds simple, right? Solar fence chargers can be a great choice. But as with most pieces of technology, there are pros and cons to consider.

Iâ€™ve used both solar chargers and on-the-grid chargers. And I know from experience there are advantages to both.

Letâ€™s examine the strengths and weaknesses of solar fence chargers using laymenâ€™s terms everyone can understand. Weâ€™ll save terms like volts and joules and low-impendence for another day.

The biggest advantage solar fence chargers offer is their ability to work off the gridâ€”no electrical outlet needed.

If youâ€™re fortunate enough to live on a large farm, this means you can set up electric fencing anywhere, regardless of whether thereâ€™s a readily available supply of electricity.

It also makes the fencing more portable. Since youâ€™re not tied to an outlet, itâ€™s easier to move the entire fence from one location to another, as you might if rotationally grazing livestock.

Almost as big an advantage is the long-term cost savings. It’s true that solar fence chargers can initially be a greater investment. But their ability to generate electricity through the power of the sun means youâ€™ll avoid the electric bill increase triggered by units plugged into the grid.

It also means your electric fence wonâ€™t be affected by power outages. As long as thereâ€™s sunlight, it will perform as expected.

The reliance of solar fence chargers on sunlight is a benefit as long as you have plenty of sunny weather. But if your region sees periods of prolonged dreary weather, you may run into trouble.

Thatâ€™s not to say the charger will stop working as soon as the sun goes behind the clouds. Quite to the contrary, solar fence chargers have rechargeable batteries. They can maintain a current overnight or during overcast weather.

But too many dreary days in a row can cause the battery to run down. So in this respect, on-the-grid units are more reliable since theyâ€™ll provide a steady charge regardless of weather.

Along the same lines, you must be diligent about keeping the solar panel clean. The accumulation of dust and dirt will block the sun and make it difficult for the charger to work efficiently.

Snow can be an even greater obstacle during the winter months. Youâ€™ll need to keep the panel clear so the charger can make the most of the shorter winter days. Itâ€™s harder to keep batteries fully charged when there are only eight hours of sunlight instead of sixteen.

Another disadvantage is the limited range of solar fence chargers, though this is a smaller concern for hobby farmers.

Under ideal conditionsâ€”with the fence properly installed and free from vegetation growing up into the wiresâ€”even a solar fence charger rated for just 5 miles should generate enough electricity to power five wires around the perimeter of a 40-acre field.

Few hobby farmers will ever encounter the limits of what a solar fence charger can power. And if you purchase a charger thatâ€™s stronger than the bare minimum you need, vegetation will become less of a concern too.

Solar fence chargers wonâ€™t be the right choice for everyone, particularly large-scale farmers with fences spanning dozens of miles. But for hobby farmers looking to keep a small amount of livestock in sunny locales, solar fence chargers can be an effective and budget-friendly choice.