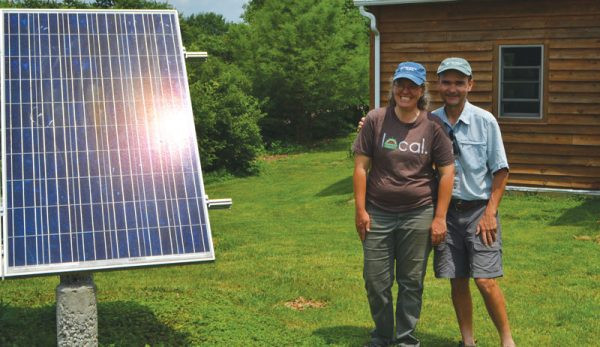 It‚Äôs a clear, early-June day in Frankfort, Kentucky, and Connie Lemley and Andy McDonald are ready for the sun.

The couple recently bought a Nissan Leaf, which they named ‚ÄúErica‚Äù for Leif Erikson. They want to see if their nine-panel solar array can return Cedar Ring Greens‚Äô annual grid-sourced electricity usage to net zero.

The couple‚Äôs grid-tied solar photovoltaic array is important to them. So are the various sustainability measures employed throughout their certified-organic farmstead.

Reaching net zero on their annual electricity usage‚Äîwhich is to say, their solar system produces as much electricity as their family of three (Lemley has a teenage daughter, Ella) uses in a year‚Äîis a goal they‚Äôve pursued and hit most of the 10 years they‚Äôve owned the land. And their main reason for purchasing a used electric car was to maximize on the excess electricity their array produced since a 2017 addition of four panels.

Another reason they bought the Leaf? ‚ÄúIt‚Äôs so fun to plug your car in!‚Äù Lemley says.

Lemley and McDonald‚Äôs central Kentucky farm isn‚Äôt off the grid, per se. But their home exhibits a number of sustainability measures common to off-grid homes.

They‚Äôre pleased with their low-impact lifestyle, which is a culmination of the interests both pursued even before their marriage 15 years ago. In fact, the couple met studying sustainability in college.

Lemley is the full-time farmer of the two, though McDonald, who works as the director of the sustainable systems program at Kentucky-based Earth Tools, is heavily involved. But she didn‚Äôt grow up wanting to be a farmer.

‚ÄúGoing into college, I thought I would do something related to the environment, but more activism or ‚Ä¶ I didn‚Äôt have a clear sense,‚Äù says Lemley.

During her senior year, two events affected the environmental studies major and turned her attention toward growing food. ‚ÄúMy grandfather sold his farm to a developer, and I discovered [Kentucky writer] Wendell Berry. That‚Äôs when I really became interested in agriculture.‚Äù

Lemley followed undergraduate school with an internship at an organic farm, a couple of years in New York City and a teaching job at a boarding school with an on-site working farm. Then, she made her way to Pennsylvania‚Äôs Slippery Rock University to learn more about organic agriculture in the school‚Äôs sustainable systems graduate program.

McDonald was also in the program. He was studying appropriate technologies after an internship with Kentucky-based ‚ÄúAppalachia‚ÄîScience in the Public Interest‚Äù and subsequent projects in Peru and Texas.

The two met and fell in love, and when their time in Pennsylvania came to an end, they were drawn to Kentucky. The state had become a second home to McDonald over the years both for his experiences there and friendships he‚Äôd established.

For Lemley, the ready-made network of friends and opportunity to farm meshed well with her desire to homeschool Ella. They spent their first five years on the outskirts of Frankfort, establishing their farm and exploring sustainability.

Then, on Mother‚Äôs Day weekend in 2009, they purchased the property that would become Cedar Ring Greens, along with a dilapidated house that left Andy feeling queasy.

When he first saw the house, he said: ‚ÄúI don‚Äôt want to deal with this.‚Äù He didn‚Äôt see potential. He saw only work.

‚ÄúWe could envision doing the kind of farming that Connie wanted to do on this land. But I really dreamed of designing and building a house from scratch that would incorporate all the things I‚Äôd learned,‚Äù he says.

‚ÄúOnce we decided to go ahead, though, it became an exciting challenge to adapt this house to become a super-efficient passive solar home. In some ways, that‚Äôs as valuable a demonstration for others, if not more so. Everybody who lives in a house lives in an existing house.‚Äù

The family lived in an RV for the first few months, followed by a stretch camping out in the barn while tearing down half the house and rehabbing the remainder.

Finally, in December, they moved into the house, which, though only nominally repaired, offered welcome shelter from the elements.

‚ÄúIt was very much warmer than the barn because we had the woodstove in here,‚Äù Lemley says.

It‚Äôs in the Soil

Walking the land of the 12 1‚ÅÑ2-acre farm, one can quickly confirm their early vision for an agricultural venture in the place.

Lemley points out that it‚Äôs not as flat as many produce farmers might prefer. But in hilly central Kentucky, flat‚Äôs not that easy to come by.

Plus, the farm is a bikeable distance to town, where Lemley sells greens at the Franklin County Farmers Market, which she also helps manage. It’s also close to the couple‚Äôs family friends.

Her farming methods are inspired by the teachings of Eliot Coleman, author of, among many books, the seminal Four Season Harvest. Using a greenhouse, Hargrove tunnel and two tunnels built according to the University of Kentucky‚Äôs low-cost tunnel design, Lemley grows and sells greens throughout the winter‚Äîspinach, lettuce, salad greens, Swiss chard, parsley and mustard greens.

In the warmer months, she grows in four of five blocks she‚Äôs designated for different crops and raises peppers in the tunnels.

‚ÄúI‚Äôve grouped my crops by family. Hopefully, it‚Äôs five years before they come back for most families,‚Äù Lemley says.

“Every five years, a block will lie fallow.Then, either in the late fall or early spring, we dig all the paths into the beds, because the mulch will have broken down. So we build up fertility in the paths for four years, then we pile them on top of the beds, then put new mulch in the paths.‚Äù

If it sounds like a lot of work, it‚Äôs because it is.

But Lemley and McDonald enjoy putting into practice sustainable farming techniques such as crop rotation, cover cropping, row covers and minimal tillage. (They use a flail mower and black plastic to prepare most of their blocks.)

And Cedar Ring Green‚Äôs organic certification from the Kentucky Department of Agriculture means her market customers never have to worry about undesirable chemical residue on her produce.

The fields may be largely Lemley‚Äôs domain, but she‚Äôs also quick to draw attention to her husband‚Äôs contributions throughout‚Äîmodifications to improve the bed roller‚Äôs usability, for example, or ingenious pepper trellises.

But back at the house, McDonald‚Äôs passion for sustainable living and appropriate technologies is on full display.

Over the decade they‚Äôve lived in the home, he‚Äôs transformed a once-unlivable structure into a demonstration site, more or less, of various techniques for low-impact and off-grid living, starting with passive solar design.

‚ÄúThis area we call a Trombe wall,‚Äù he says, pointing to the south-facing exterior. ‚ÄúA Trombe wall is an area where the glazing is on the outside of a heavy masonry wall. The space in between is not necessarily the living space. It slowly heats it during the day in the wintertime, then our living space is really on the other side of the brick wall. Then in the kitchen, we just have a sun space where the sun comes into the living space.‚Äù

Employing these two elements of passive solar design, their house stays warm during winter days, reducing their reliance on the woodstove. (There‚Äôs no central heat or air conditioning.)

And though the house is plumbed and receives city water (‚ÄúYour readers should know about the wonders of running water!‚Äù McDonald laughs), he‚Äôs taken various measures to ensure the family‚Äôs water usage is environmentally responsible.

‚ÄúEach time you use it, you put in a handful or less of wood shavings,‚Äù he explains. ‚ÄúToilet paper goes in the box. There are two chambers. You use one chamber until it fills up, then you switch to the other chamber. When that chamber fills up, you empty the first chamber.‚Äù

McDonald estimates he empties a chamber every four months. The contents breaks down in an outside bin for a couple of years. After that, it‚Äôs applied around trees in the field‚Äînever in the gardens.

‚ÄúThe volume of liquid coming out of a compost toilet is minuscule compared to a flush toilet,‚Äù he says.

Additionally, the home boasts a green roof and a gray water system that irrigates a raspberry and blackberry patch. There’s also a solar water heater for warm showers after a long day of farming.

But the true star of the sustainable farm is that nine-panel solar PV array. It produces enough power annually to power a traditional kitchen stove and refrigerator, fans, three computers, various lights and, during most months, a walk-in cooler for harvested produce. And now, the sun also charges their car.

‚ÄúWe had the PV system before we had plumbing or running water,‚Äù McDonald says. ‚ÄúWhen we first put it in, it was 1.12 kilowatts. That actually made us net zero. We continued to be net zero until sometime in the last two years, when we noticed our electric bill starting to go up a little.‚Äù

‚ÄúWe were running the walk-in cooler more because we were going to more markets,‚Äù Lemley says. (They do, however, agree that the temptation of the water heater‚Äôs electric backup to Ella may have also contributed to the rise.)

‚ÄúSo two years ago,‚Äù he continues, ‚Äúwe expanded the solar array and basically doubled its capacity. We only really needed to add one panel to get back to net zero. But the price of modules had fallen so much that we decided to add four.

‚ÄúIt produces, I think, about 2.2 kilowatts. For reference, when it was 1.1 kilowatt, it was producing about 1,400 kilowatt hours a year. That was our total annual usage.

“The average home in Kentucky uses about 1,100 a month. So we were using about 10 percent the amount of electricity as the average home. That includes running a walk-in cooler once a week for 40 weeks.‚Äù

Yes, the family enjoys some creature comforts uncommon to off-grid lifestyles. And the two even consider someday installing a mini split air conditioner someday to help with allergies. But the core of their environmental efforts is, quite simply, simplicity.

‚ÄúIt‚Äôs worthwhile for people to realize that if you live frugally, you can have a completely solar-powered home that doesn‚Äôt require a huge PV system,‚Äù McDonald says.

And, according to Lemley, ‚Äúyou don‚Äôt have to have the absolute perfect situation to be able to figure something out.‚Äù

This story originally appeared in the September/October 2019 issue of Hobby Farms¬Ýmagazine.