Some Hard Truths About How Chickens Molt

When daylight lessens and laying chickens take a break, their feather loss could be minor or downright disturbing. Here some some whys and hows of molting. 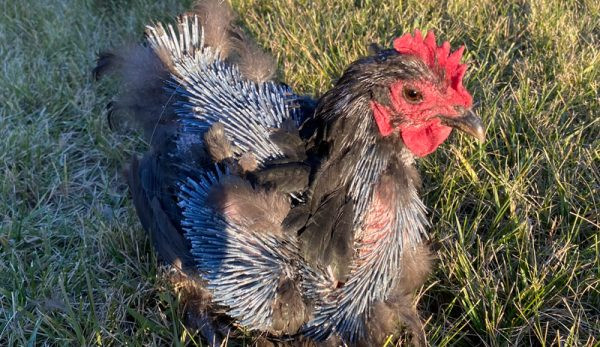 The telltale feathers scattered throughout our runs plainly announced that autumn molting season was once again upon us. Some birds, like Butters Orpington, dropped a few feathers each day, retaining a full, fluffy appearance throughout the past couple of months.

Others, like Fitzgirl Orpington … yeeesh. Poor Fitzgirl looked like she forgot to take off her Halloween porcupine costume. Her molt was so severe that my son Jaeson and I had to clean out the entire chicken coop, all three nestboxes, and the waterer, which was plastered with discarded black feathers.

Jaeson was disgusted. “Why’d she drop all her feathers when none of the other girls did?” he asked.

Why did Fitzgurl look like a horror-flick reject while her coopmates look like pageant queens? Unlike Butters, Selene, and the rest of her henhouse crew, who underwent a soft molt, Fitzgirl underwent a hard molt, losing all her feathers at the same time.

To a keeper new to chickens, a hard molt can be almost heart stopping. Over the years, I’ve received dozens of panicked messages from backyard flock owners, each of them freaked out that their hen might be sick and/or dying.

Nope! This annual feather purge happens every year once a hen reaches approximately 18 months of age. It’s the poultry way of saying out with the old, in with the new.

A girl discards her old, often bedraggled feathers in order to grow in healthy new plumage. It just so happens that some chickens, like Butters, do this in an almost imperceptible manner while others go full drama queen, like Fitzgirl.

Don’t misunderstand me … a chicken’s temperament has nothing to do with how she molts. Fitzgirl is actually quite shy. She’s the one hen in the Orpington retinue who will not take treats from my hand. She’ll hang back while everyone else crowds and leaps for stale bread, mealworms, etc.

If anyone in the group is a drama queen, it’s Selene Orpington, who “sings” quite loudly for five minutes before laying an egg and for 10 minutes after. Every. Single. Egg.

So why do some hens lose their plumes in a gentle manner, while others act like exhibitionists, dropping everything at once? It all has to do with what’s going on behind the scenes, so to speak. It’s not about a girl’s appearance but actually about her reproductive system.

A Matter of Hours and Months

A hen needs a minimum of 14 hours of daylight in order to lay.Â  As autumn approaches and daylight begins to dwindle, a hen’s egg production begins to taper off and she begins to drop her feathers.

Instead of laying eggs, the hen concentrates her energy on growing new feathers.

The molting period not only allows a bird to discard her worn plumage; it gives her reproductive system a much-needed rest, allowing it to rejuvenate and recuperate from a season of continual egg laying. The molting process can take several months to complete, so by the time a hen has fully regrown her feathers, springâ€”and its longer daylight hoursâ€”will not be far away.

Read more: Here are some more answers to questions about molting.

Chickens of a Feather Don’t Molt Together

However, as evidenced by Fitzgirl and Butters, not all chickens molt the same way. Those who undergo soft moltsâ€”a gradual, almost imperceptible feather lossâ€”tend to be the lazier layers in the bunch. After only a few months of egg laying, they gently begin their molt. As a result, they don’t produce eggs to their full potential … but look beautifully full feathered and fluffy, the ideal backyard hen.

Hard molters, however, lay more frequently and much longer into the season. By the time they begin to molt, these hens look worn and scraggly … and then they drop all their feathers and look even worse.

In other words, don’t judge a hen by its covering. Butters and Selene might look like the epitome of a beautiful backyard hen. But, more than likely, poor raggedy Fitzgirl is the better layer.

Jaeson was wrong, however. The scattered feathers throughout the Ameraucana coop indicate that our Ameraucana girlsâ€”who gave us our best blue-egg season to dateâ€”also had a hard molt. He’ll discover this soon enough.

Tomorrow, in fact, when he’ll spend the afternoon cleaning out their coop.