Farm founder Michelle Aguilera tells us how miniature Mediterranean donkeys have helped her discover the benefits of hobby farm life. 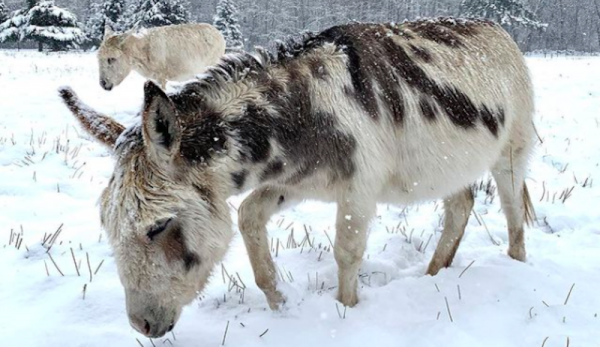 “The hobby farm life is relatively new to me,” says Michelle Aguilera. She left what she calls a “mentally exhausting” lifestyle in Charleston, South Carolina, to found the Stone House Mini Donkeys farm in Oregon in 2015.

“I wanted a simpler life for my family,” Aguilera explains. “One that included being outside more and working alongside one another.”

Since embracing a farm-focused way of living, Aguilera has chosen to make miniature Mediterranean donkeys an integral part of her homestead. And her charming drove have subsequently become hits on the social media circuit.

We spoke to Aguilera about becoming smitten with miniature donkeys and their emotional needs. We also got into the benefits of a hardworking but slower-paced lifestyle.

Back in 2013, Aguilera chanced across a couple of miniature donkeys at a state fair. “I fell in love with them instantly,” she recalls. “I was drawn to their soulful eyes.”

After moving to Oregon in 2015, Aguilera set about adding miniature donkeys to her own land. She made the animals a focus of her family’s farm.

“Miniature donkeys will follow you everywhere and crave your affection but only after you have gained their trust,” says Aguilera when asked about the temperament of the animals.

She adds that to date she has owned and rescued 17 donkeys and noticed that “they have all required love, time and space in order to trust and feel safe.”

A Bray and a Cute Stare Down

When it comes to the personality of her miniature donkeys, Aguilera says that “they easily let you know how theyâ€™re feeling and what they need.” She adds that her donkeys are “always excited to see you and will run to greet you.”

Just don’t forget the dinner schedule: “Donkeys are very mindful of feeding times and are quick to remind you with a bray or cute stare down if you are a few minutes late.”

Read more: What do new owners need to know about donkey health?

On a day-to-day basis, Aguilera says that one of the challenges to raising miniature donkeys is “finding the time to give them the attention and affection they require in order to thrive.”

In Aguilera’s experience, it’s best to do this while cleaning the stalls, during feeding times or via a grooming session. Once you’ve made time to lavish the donkeys with affection, they’re likely to “return it tenfold.”

Slowing Down to Get Closer

“Hobby farm life has meant more to my family than we could have ever imagined,” says Aguilera, reflecting on the benefits her lifestyle change has brought about.

“Yes, it is a lot of hard work, but it has slowed down life for us and I believe we are closer for it. We work with each other for the betterment of the donkeys and enjoy seeing them thrive on our farm. We have a sense of pride in what we have built and in giving them a home in which they can grow and be happy.

“I believe that donkeys are incredibly soulful and to have a relationship with one is simply amazing!”