"If the 'king' of the antebellum southern economy was cotton, then the title of 'queen' must go to the pig." --Sam Bowers Hilliard, author of Hog Meat and Hoecake: Food Supply in the Old South 1840-1860 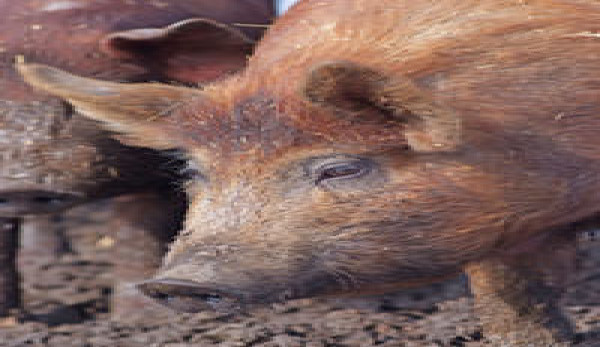 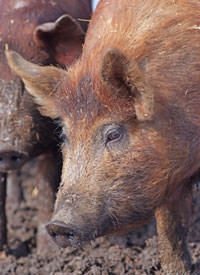 Did you know that old-fashioned, Southern hogs were black or red, but never pink-skinned white?

White pigs sunburned in the sizzling, steamy climate of the South, so farmers didn‚Äôt want them. Southern hogs had to be strong and self-sufficient to survive.

Long after Northern hogs, largely descended from British breeds, were delegated to laid-back lives in the pigpen with troughs of slops and corn, Southern swine, descended from Spanish hogs, were still expected to ‚Äúroot, hog or die.‚Äù

Southern farmers continued to earmark rugged, semi-wild swine, turn them out to root in the forest and then round them up again when butchering time drew near.

Hog slaughtering was a time for celebration, when families ate fresh pork for perhaps the first time that year. They cured the rest of the animal for later dining and nothing of a pig was wasted.

Families rendered hog fat, and there was plenty of it, into lard‚Äîand lard was a staple of life; folks spread their breads with tasty lard. Due to its high saturated-fat content, lard didn‚Äôt smoke when used for frying and it lent its distinct, pleasant flavor to all manner of cooked foods.

Piecrusts and biscuits created with lard were flakier and more toothsome than baked goods made with butter. It was the cook‚Äôs best friend!

Lard, lye and water were cooked together to make lye soap.

People used lye soap to wash their faces and hair, and their floors and laundry. They made lard-based healing ointments by blending in roots and herbs, and used lard to tame unruly hair. How could folks exist without it?

Besides that, fenced-in hogs ‚Äúrototilled‚Äù and fertilized the family garden plot during the winter months; they rid the barn of pesky rodents; and even served on snake patrol. A tame sow or two tethered in the yard or allowed to roam the homeplace kept the local rattlesnake and copperhead populations under control.

High on the Mulefoot Hog

‚ÄúWe were thinking of raising hogs again,‚Äù she says, ‚Äúand were debating which ones to go with. We found Mulefoot hogs on the Internet and, being Chickamauga Indians, we were fascinated by the fact these were the same hogs our ancestors ate hundreds of years ago.

“We liked the fact that these are ‚Äòfat hogs‚Äô and taste like old-time pork. Meat producers spent the last 40 years trying to make pig taste like chicken and be ‚Äòhealth food,‚Äô but real health food is natural‚Äîno hormones, antibiotics and pesticides added. Our hogs eat the highest-quality feed and drink pure Ozark spring water.

“Their meat is a beefy red color, it‚Äôs tender and the flavor is out of this world. Our Mulefoot hogs bring a premium price when sold for meat. We have local customers and get many requests via the Internet from people who are interested in¬Ý purchasing meat cuts, but we also sell breeding stock and have a waiting list for our hogs.‚Äù

The breed‚Äôs exact origin is uncertain; however, the first Mulefoot hog registry was founded in 1908, and by 1910, there were 235 breeders registered in 22 states. Then, as the market for lard hogs dwindled, so did the registry‚Äôs roster of breeders, until in 1985, only one herd remained: That of R. M. Holliday of Louisiana, Mo., who, following in his father‚Äôs and his grandfather‚Äôs footsteps, had bred pure Mulefoot hogs for nearly 40 years. Painter and Bates‚Äô hogs are descended from the Holliday herd.

The Mulefoot‚Äôs fused hooves resemble the hooves of mules and horses, hence the Mulefoot name.

They are soft-coated, black hogs (a few are marked with white on their faces or feet) with semi-flopping ears that prick forward. Most weigh 400 to 600 pounds by two years of age.

They are gentle, hardy, easy to fatten and easy to raise, making them the quintessential ‚Äúraise on pasture‚Äù pig. Although Mulefoot pork, like that of most Southern heritage hogs, is fatty by modern standards, much of the fat melts in cooking and the excess can be drained away. Pork connoisseurs agree: Mulefoot meat, particularly Mulefoot ham, is a tasty treat not to be missed.

When asked what advice she‚Äôd offer potential conservation breeders, Bates says, ‚ÄúThere is always room for more Mulefoot breeders, just make sure to get registered stock. Lots of people have ‚Äòmulefoots‚Äô they got from the wild or from sale barns, but since their lineage is unknown, these are not considered heritage hogs. Real Mulefoots, ours included, are registered with the American Mulefoot Hog Association. Potential breeders should know Mulefoots take longer to mature and have smaller litters [five to six piglets], but since they bring more per pound than split-hoof hogs, it works out in the end. In our experience, they are gentle, easy-to-get-along-with hogs that pretty much take care of themselves. They‚Äôre real, old-time hogs and we enjoy raising them.‚Äù

Mulefoots are only part of the picture: There are five critically endangered Southern-heritage breeds on the ALBC‚Äôs Conservation Priority List.

To be listed, the following criteria apply:

Qualifying American breeds all hail from the South; they are the Mulefoot, the Red Wattle, the Guinea Hog, the Choctaw and the Ossabaw Island Hog.

All but the Choctaw are also listed on Slow Food USA‚Äôs Ark of Taste. The Ark of Taste seeks to save an economic, social and cultural heritage and to preserve and celebrate endangered tastes.