Spade Vs. Shovel: What’s The Difference?

Spades and shovels are very similar tools, but although their names are often used interchangeably, they aren't exactly the same. 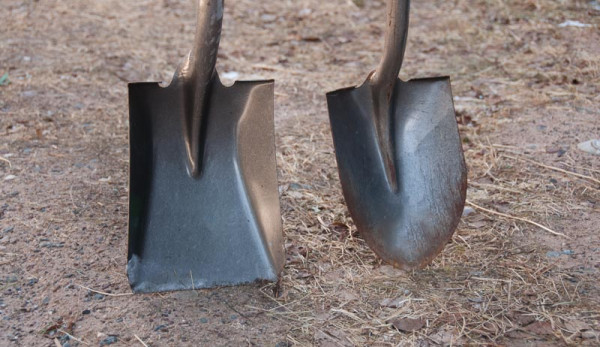 The English language can be confusing, given that it borrows words from many different languages and includes many words with similar meanings. Understanding the deepest nuances of such a language can be a challenge in and of itself; throw in the fact that words are frequently used in ways that are technically incorrect, and things get even more confusing.

Consider as an example the words spade and shovel. Both refer to digging tools that are common on hobby farms—in fact, it’s hard to get along without them! But while the terms are often used interchangeably, the truth is that spade and shovel refer to separate and different tools with their own strengths and usages.

While spades can come in a few different shapes and sizes, a spade is generally a flat metal digging tool with a sharp edge, which allows it to be used for both digging and for moving dirt, debris and similar materials. While some spade blades are rectangular in shape, many others are sharply pointed to increase the penetrating ability of the blade. To aid in digging and breaking through tough ground, a spade’s blade will often have a metal footrest positioned on either side of the handle, allowing you to push the spade further into the ground using your feet.

Some types of spades, referred to as drain spades or trenching spades, feature narrower and longer blades, which—as their name implies—make them suitable for digging trenches and ditches.

The term shovel tends to be much more of a catch-all than the term spade, which means that the word shovel can refer to a wide variety of digging tools.

In essence, a shovel’s primary use is for scooping and moving materials from one place to another, so with this in mind, many shovels are larger than spades so that more material can be moved with each scoop. This also means that some shovels are made of plastic rather than metal because digging and breaking through the earth is not always the primary goal. A perfect example is a plastic snow shovel, designed with a large, wide scoop for quickly shoveling snow out of the way.

However, another common type of shovel is the metal digging shovel. This is very similar to a spade, but it usually has a more rounded blade that falls in between the flat or sharply point blades that are used for spades.

Remember, the fact that spade and shovel are so often used interchangeably means that you’ll see instances in which a tool that is clearly a spade is referred to as a shovel and vice versa. This isn’t a big deal by any means, but understanding the more formal meaning of the two terms can be useful if you’re looking to purchase a particular type of digging tool and need to know what to look for.