Spanish Mustangs in the Wind

Photo by Audrey Pavia Rio meets a floating plastic bag on the trail. Southern California is famous for the hot, dry winds that blow here at various times of the year, drying everything out and fanning brush fires in the hills. For the past week, these Santa Ana winds have been relentless. Last weekend, we […] 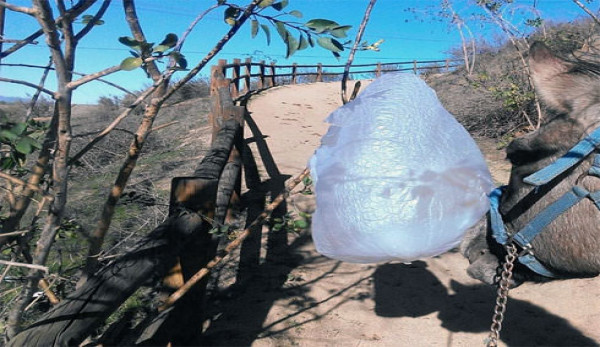 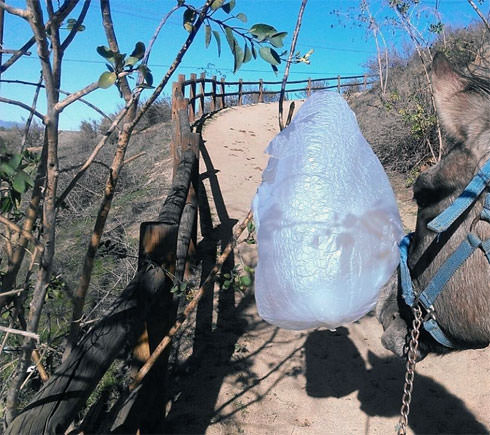 Rio meets a floating plastic bag on the trail.

Southern California is famous for the hot, dry winds that blow here at various times of the year, drying everything out and fanning brush fires in the hills. For the past week, these Santa Ana winds have been relentless. Last weekend, we had record low temperatures. Today, in the middle of January, it was nearly 90 degrees Fahrenheit.

In addition to drying out my hair and aggravating the chest cold I managed to catch while freezing last weekend, the winds are making things interesting around the farm.

First, there was the incident on the trail. Lisa, who is training my young Spanish Mustang Rio to become a “realâ€ť horse, was riding Milagro, my other Spanish Mustang, and leading Rio alongside, on the trail. Unlike most horses, mine donâ€™t seem to mind the wind. They take it stride. But that day on the trail was particularly challenging when a white, plastic shopping bag came floating toward them.

Lisa is used to riding Warmblood horses, which are typically a lot more high-strung than Spanish Mustangs, and she prepared for a spook. Instead, the horses stopped and watched the floating ba as it approached and then hovered right in front of Rio. He looked at it with great interest. Good thing I had introduced him to helium balloons last year after I got some for my birthday!

Then, there are the chickens. Some of the wind gusts weâ€™ve had have been fierce, sending my patio furniture skittering across the yard. When these gusts come, the chickens look like they are going to blow away. Their feathers part down to the skin and they brace themselves so as not to topple over. Itâ€™s actually rather funny.

Two of my indoor cats like to try to run outside if someone opens the back door around dinnertime. What better way to say “Iâ€™m hungry!â€ť than to run outside where the coyotes lurk? But since the wind started, several attempts to run outside have been thwarted. As soon as they hear the wind whipping, they change their minds and run back into the house.

The horses, of course, get the worst of it since they are outside all the time. The Santa Anaâ€™s blow from the East, so on the windiest of days, all the horses stand with their heads facing West, the wind whipping their tails. The heat is actually the bigger issue for them since they have thick, winter coats. Milagroâ€™s hair is literally 3 inches thick, which is great when it gets down to 34 degrees at night like it did last week. But today must have been miserable for him when it hit 90 degrees.

Local weather forecasters are predicting a few more days of this warmer weather, but I canâ€™t wait for it to end. Although, I do like the fact that unwanted puddles in the backyard disappear very quickly, and the horsesâ€™ stalls are nice and dry. I guess there really is a plus side to everything.