Some of the Spanish goat's colorful regional names suggest one of their primary uses: they're called "brush goats" and "briar goats" in the Carolinas, "wood goats" in Florida, "Hill goats" in Virginia, and "scrub goats" throughout their original range. 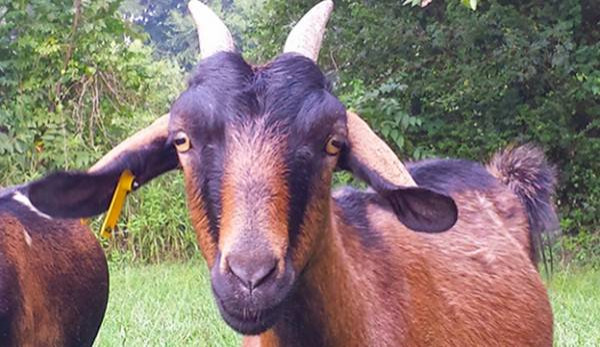 Use: Some of the Spanish goat’s colorful regional names suggest one of their primary uses: they’re called “brush goats” and “briar goats” in the Carolinas, “wood goats” in Florida, “Hill goats” in Virginia, and “scrub goats” throughout their original range. Spanish goats were (and are) the best organic woods and brush control agents on four legs. Although some strains are small- to medium-size and decidedly rangy, breeders, especially in the goat-raising regions of Texas, have selectively bred up a bigger, meatier Spanish goat. Large or small, Spanish goats produce flavorful meat and healthy, multiple kids without requiring a lot of human intervention and they’re disease-, parasite- and foot rot-resistant, making them ideal for anyone involved in minimum-input and organic chevon production. Photo by Murray Edwards.

History: Christopher Columbus brought the first Spanish goats to EspaĂ±ola (Haiti) on his second voyage in 1493; when Francisco Vasquez de Coronado led the first Spanish army into New Mexico in 1540, goats came along as a walking food supply. Spanish colonists and their goats subsequently settled in what are now our Southwestern and Southeastern states. Goats escaped, goats were set free to fend for themselves. They went forth and multiplied in wild scrubland where only the strong survived; their descendants are today’s Spanish goats.

Conformation: Spanish goats are a landrace breed. Crossbreeding with dairy and fiber breeds occurred throughout the Spanish goat’s rich history, resulting in widely differing characteristics in various herds. Genetically pure populations still exist but even these were influenced by the climate and terrain in which they evolved, so genetic diversity within this breed is the norm. All colors are acceptable. Most Spanish goats have long, twisty horns. The hair coat is usually short but some goats grow fringes on their lower bodies and thighs, while others produce cashmere winter coats. Individuals weigh between 50 and 200 pounds; larger animals are from strains selected for decades for meat-making capabilities. What they all have in common are an inherent wariness that helped them survive, strong teeth and legs, almost unimaginable hardiness, and the ability to take care of themselves.

Special Considerations/Notes: The very qualities that enabled Spanish goats to survive under adverse condition currently threaten their existence. Because they are such easy keepers and because they kid without assistance, thousands upon thousands of tough, rangy Spanish does throughout the country are being bred to Boer and Kiko bucks to produce meatier kids. Only an estimated 8,000 Spanish goats remain. The American Livestock Breeds Conservancy is working with a few dedicated breeders to preserve these goats and additional conservators are badly needed.