Spare the Goldenrod, Spoil the Garden

Goldenrod was once undeservedly shunned from gardens. This sunny North American native plant was (and sadly still is) considered a weed in much of the country and is often blamed for causing hay fever, though its pollen is too heavy to be carried on the wind. 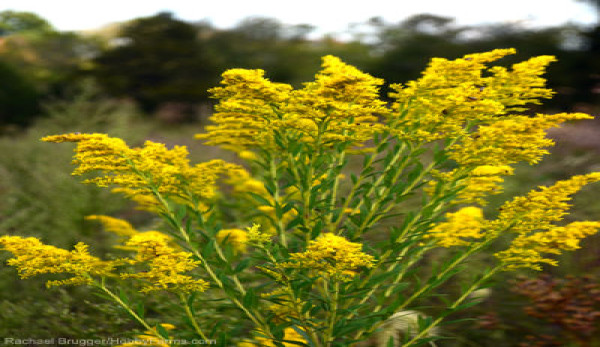 Goldenrod was once undeservedly shunned from gardens. This sunny North American native plant was (and sadly still is) considered a weed in much of the country and is often blamed for causing hay fever, though its pollen is too heavy to be carried on the wind. (Ragweed is the true culprit.) There are more than seventy-five species of this beautiful, underused plant, and many of those species have numerous varieties and cultivars. Goldenrod is hardy fromÂ USDA zones 4 to 9 and ranges in height from 1 to 4 feet, depending on the species. All goldenrods are in the genus Solidago.

Goldenrods bear golden-yellow flowers on slender stems in late summer, and itâ€™s often difficult to differentiate one species from another. The many tiny flowers of this late-bloomer are organized into inflorescences that range from spike-like clusters to plumes, balls and even firework-like bursts, depending on the species, variety or cultivar. All goldenrods prefer full sun and average to moist garden soil, and some do have a tendency to spread aggressively via their underground rhizomes.

In other parts of the world, where goldenrod was introduced as a garden specimen, the plant has escaped and displaced native plants, causing problem. Here in North America, though, goldenrods provide pollen, nectar and much needed habitat to soldier beetles, ladybugs, parasitic wasps, damsel bugs, assassin bugs and many other beneficial insects.

Although there are many selections to pick from, here are three goldenrod species with a broad native range and an easy nature. I grow all three of these selections in my own garden and am thrilled late every summer when they come into flower.