You're bound to attract some of these beneficial insects to your garden, so keep an eye out and help Lost Ladybug Project track native and invasive ladybugs. 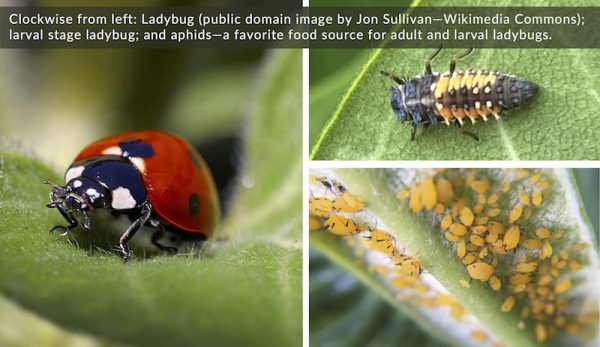 You might have a sprawling farm or just a modest herb garden. Either way, you’ve likely got at least a few kinds of ladybugs. Whether yours are rare, native species or the much more common invasive types, entomologistsÂ  from Lost Ladybug Project would like to hear from you.

Since 2000, the folks behind The Lost Ladybug Project have actively collected ladybug observations from the general public. They’re trying to keep tabs on the nearly 500 different ladybug species that live in North America. Thanks to photographs and brief notes from Lost Ladybug Project participants, researchers now know which native ladybugs have lost ground. They also are better able to track the spread of invasive species like the Asian multicolored lady beetle (Harmonia axyridis).

When you think â€śladybugsâ€ť or â€ślady beetles,â€ť you probably imagine lipstick-red insects with a smattering of black dots. Actually, ladybugs’ colors and markings can vary a lot between speciesâ€”and even within the same species.

Some are yellow with black spots. A few types are primarily black or brown with red, yellow or orange spots. Many come in various shades of red or orange.

Of course, plenty of ladybugs do have an orangey-red shell and varying numbers of black spots. The ones you likely see most often are non-native Asian multicolored lady beetles. The U.S. Department of Agriculture introduced these to the U.S. on multiple occasions as a natural aphid control.

The Asian multicolored lady beetle now thrives here and may be outcompeting some of our native ladybugs.

Read more: Keep an eye out for these spring-emerging beneficial insects!

Regardless of species, ladybugs will pull their weight in the garden. In particular, these beneficial, predatory insects target soft-bodied pests like aphids and spider mites. They’ll also gobble up larval stage asparagus beetles, Colorado potato beetles, bean beetles and many more.

There are a few ways you can naturally boost the number of ladybugs in your landscape. First, avoid the use of pesticides if you can, since these don’t discriminate between insect pests and their natural predators.

And, because pollen is another important food source for ladybugs, be sure to include pollen-rich plants in the garden. Ladybugs are especially drawn to plants with clusters of small flowersâ€”think yarrow, dill, fennel and anise. Feverfew and common milkweed are other good bets.

Mix these into your perennial flower beds or add some near your annual veggie crops to attract more ladybugs.

Read more: Check out these 5 tips for luring ladybugs to your garden.

Summarizing multiple research studies during a 2020 presentation, â€śLadybugs in the Garden: The Lost Ladybug Project in Action,â€ť Cornell University Department of Entomology Professor John Losey noted, â€śOverall, 41 percent of the total insect species saw a decline over the past decade. These weren’t just minor declines. These are some major declines to the point where we’re worried about … significant groups potentially going extinct.â€ť

Ladybugs are some of the insects in real trouble. Fortunately, participating in the Lost Ladybug Project is easy. You can start by taking time out to look under leaves and along stems for ladybugs, ladybug larvae and clusters of slightly pointy, orange ladybug eggs.

Whenever you happen to see a ladybugâ€”either a native or non-native speciesâ€”simply snap a good photo. The project accepts .jpg files that are less than two megabytes.

Along with photo submissions, you’ll also provide the Lost Ladybug Project with the ladybug’s location, some details about its immediate environment, and the date you saw it. Finally, you should also offer your best guess at what kind of ladybug you photographed. (Don’t worry! The Lost Ladybug Project offers online resources to help with ladybug species identification. DiscoverLife’s ladybug identification tool is also very helpful.)