San Diego Seed Company owner Brijette Peña tells us about her fascination with the prolific potential of seeds and her customers' gardening creativity. 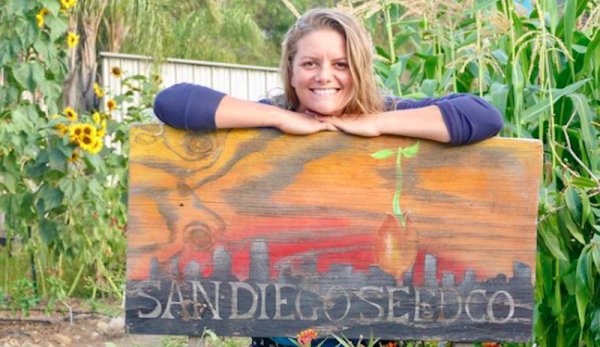 “I’ve always been fascinated at the prolificness of seeds and how one plant can potentially give you hundreds more,” says Brijette Peña, owner of the San Diego Seed Company. “That’s still amazing to me now, even a decade later.”

Specializing in providing locally-sourced organic seeds that are tailored to the demands of the American southwest—along with catering to urban growers dealing with a paucity of space—the latest additions to the San Diego Seed Company’s vibrant vault include Chinese purple hardneck garlic, lizard spinach seeds and eye-catching chocolate cherry sunflower seeds.

We spoke to Peña about repurposing bathtubs into growing containers and adapting seeds to meet the demands drought-prone regions. We also got into the enduring appeal of growing tomatoes.

In Need of Seeds

“We got involved in seeds out of a need,” says Peña when she reflects back on the origin story of her company. “We realized that nobody was really focusing on drought-tolerant varieties for the American southwest,” she adds. “So it all blossomed out of that.”

Addressing the dynamics of growing in southern California, Peña explains that dealing with long warm seasons and short cool seasons factors into which crops prosper.

“We’re looking for varieties that do well in very hot dry climates,” she says. “We get less than 10 inches of rain in a good year. We’re capable of growing warm season varieties from February to November, which is very different to other parts of the United States.”

This year, the San Diego Seed Company conducted a number of successful corn grow outs. “It’s been so much fun shucking the corn and seeing the volume of seed we’ve gotten off of it,” says Peña.

Alongside corn, Peña adds that carrot season is her favorite production period: “It smells amazing and very few people actually get to see a carrot grow from seed. It’s a special experience.”

“We’ve sold a lot of garlic this year,” says Peña when asked about the company’s most popular seeds. “That’s been really fun because people are just really excited to grow their own garlic.”

Peña says that tomatoes are also continually one of the the seed company’s biggest draws. “People love tomatoes because of the massive genetic diversity within that crop group,” she explains. “There’s hundreds of thousands of varieties of tomatoes out there and some are particularly bizarre and people love them.”

When it comes to growing in tight urban spaces, Peña has witnessed her customers getting creative. “I’ve seen people growing in bathtubs and large fiberglass containers,” she says. “We have a huge community of container growers using all different types and sizes, like improvising with a shopping cart lined with burlap. We’ve seen it all.”