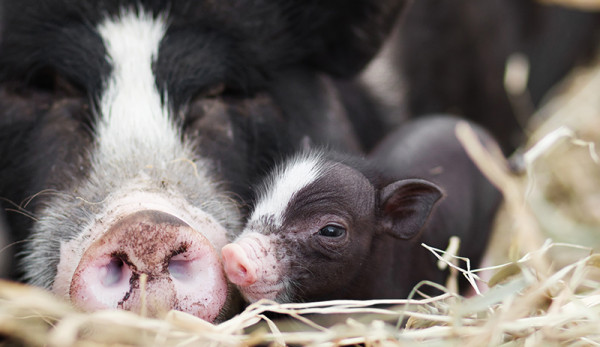 With spring now definitely in the air, it is suddenly baby season again. On the farm, sometimes it feels like baby overload depending on the size of your herd or flock. As all farmers know, having five ewes does not necessarily mean having five lambs; try 10 or even 15 lambs if all ewes have multiple births. Different species produce varying numbers of offspring, which can make farm management exciting, if not occasionally stressful.

A few years ago, I was called out to help deliver some piglets. The sow had delivered five piglets 24 hours earlier, but due to exhaustion, progression had come to a standstill. I anticipated a speedy delivery but instead found myself in what appeared to be a never-ending cycle of piglets. Every time I reached in, there was another. And another. And another. How many could there possibly be?

An average pig litter is eight to 12 piglets. One of the challenges with piglets, however, is that it is difficult to know when they’ve all been delivered. A full-grown sow’s long abdomen means my short arms can’t reach all the way to the end of the uterus; many a time I’ve been able to just barely touch the end of a piglet’s tail with the tip of my fingers but not be able to grasp it to pull it out. If this were a dog or cat, you could simply take a quick x-ray to determine if all the babies were out; for obvious logistical reasons, this doesn’t happen with a 500-pound sow.

And so with this particular case, I kept reaching in and kept feeling more piglets. I was up to 12, then 13, then 14. Finally, an hour and a half later, exhausted and covered in sweat and other stuff, I pulled out what I was convinced was the last piglet to both to my and the sow’s collective relief.

From a production standpoint, the more piglets, the merrier, but only up to a point. A sow has a limited number of teats, and if the number of piglets exceeds that limit, someone is going to go hungry, which either means a lost piglet or extra work for you. This illustrates the delicate balance between maximum production and what Mother Nature can handle.

Another good example is sheep and goats. Ewes and does commonly have either singles, twins or triplets. (Occasionally, there are more than that. The Romanov sheep breed, for example, is known for producing three, four and even regularly five lambs at a time.) However the mother goats and sheep only have two teats. Mothers carrying multiples should not only be managed differently before birth—for example, given extra feed during gestation—but also be watched closely right after birth to make sure the offspring are getting the maternal nurturing and milk that they require to thrive.

Cattle more typically have a single calf, although twins do occur. Obviously, there’s only so much space in the mother’s uterus for growth, so calf twins are smaller when born than a single birth.

Size is much more of an issue with horses. Twins with horses are very, very rare and not welcomed. A mare’s uterus is simply not equipped to nourish two foals, and if they survive until term (about 80 percent of twin equine pregnancies result in spontaneous abortion), twin foals are usually very weak and don’t survive. Because of this—and the stress to the mare—a common practice is to manually destroy one of the embryos very early in the pregnancy; this is done via rectal palpation, guided by an ultrasound.

Back In The Hog Barn

But back to my story. After about 10 minutes of rest after delivering what I thought was the full litter of piglets, I checked the sow one last time for any additional babies. I felt none. With all delivered piglets alive and nursing, I cleaned up and headed out with instructions for the farmer to keep a close eye on the new family for the next few hours.

I had all but forgot about this visit until I spoke with my boss the following week. Causally mentioning the farm I had visited, she said the sow delivered another piglet the day after my visit. Incredulous, I couldn’t imagine how that sow hid another piglet from me. It was just one of those things, especially when you have short arms.