With the arrival of 13 lambs on the farm, this first-time shepherd had her hands full. Here's what she did to ensure the birth of healthy, happy lambs. 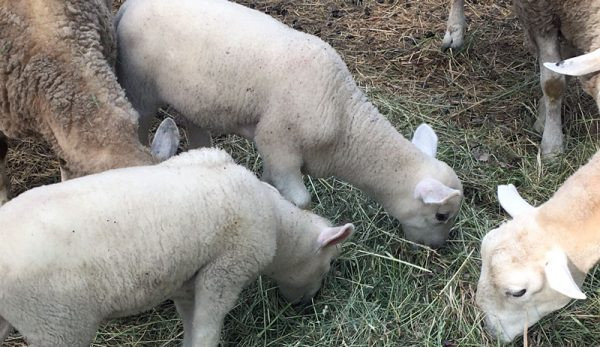 Last month was pretty much a whirlwind for us. We had 13 lambs in six days from seven ewes!

All the births went well. No problems arose that needed intervention. I have read that about 20 percent of all lamb deaths happen in the first 10 days of life, so I think this is such a crucial time in the lambâ€™s life.

We did have one case of a ewe having triplets and rejected one of her lambs for the most part. This little ewe lamb was smaller than her two brothers. But she was (and is) pretty scrappy.

She nursed a little the first few days, and I supplemented with colostrum and then with lamb milk replacer.

After each of the ewes gave birth, I gave them some bonding time with their new lambs before checking each teat to make sure that milk/colostrum was flowing.

In most cases, a shepherd can expect everything to go smoothly. But sometimes, a waxy plug (that has prevented bacteria from getting into the udder during pregnancy) isnâ€™t dislodged by the lamb nursing after birth.

In that case, youâ€™ll need to help. Just milk the teat to remove the plug so the lamb can nurse.

Read more: These tips will help you get ewes ready for lambing season.

Colostrum is very important to the health of a newborn lamb. According to Sheep 101, colostrum contains a high level of antibodies against a variety of infectious agents.

When a lamb is born, it doesnâ€™t have its own antibodies. The colostrum provides those important protections.Â

This little lamb has become a definite â€śbottle baby. It comes running up to see me whenever I walk out in the pasture (or near the pasture) and cries very loudly. It’s a clear â€śfeed meâ€ť sign, even when it’s not time for feeding!

Our little bottle lamb has already had a couple of CD&T shots to give her the protection that she did not get from motherâ€™s milk.

I was lucky to be able to leave her out with the rest of the ewes and lambs so that she could have their company as she grew up. I also saw her sneak a few sips here and there from various ewes!

The rest of the lambs will get their first vaccine next week.Â

Read more: Vaccinating your sheep provides an ounce of prevention.

As for the ewes, they need some extra TLC after giving birth as well. Birthing makes ewes very thirsty, so I ensure they have plenty of water right after birth.

I donâ€™t usually feed them hay or grain right away so that they can focus on bonding with their lamb(s). But in the days after, I make sure each ewe has plenty of grain and high-quality hay. This way, she can produce a good amount of milk for her lambs.

It’s really fun watching the lambs grow and change. In just a few short weeks they have gone from only needing milk from the ewes to becoming great foragers on the hay, grass and feed that their mothers also eat.

We also finished shearing the ewes now that their lambs are about a month old. My husband and I do our own shearing–which isnâ€™t easy, and the results are not as beautiful as a professional shearer.

However, with temperatures predicted to be in the high 80s this week, Iâ€™m really glad we were able to get everyone shorn. You donâ€™t realize how hot that wool is until you are shearing and can pull away the shorn fleece. It’s quite warm next to the skin!!

Weâ€™re ready for the upcoming warm months of summer and looking forward to the changes in our ever-growing flock!