In the spring, I say an unreserved hurray for salads! The first leaf lettuces are such a relief and contrast to winter roots. 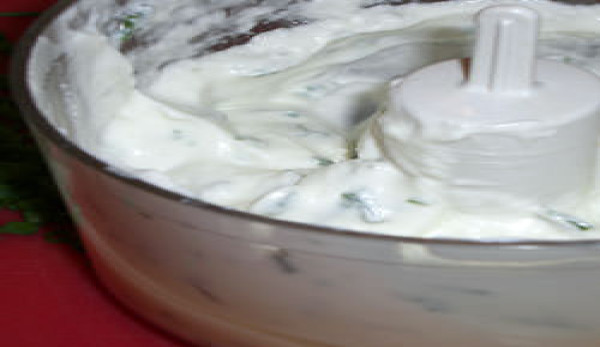 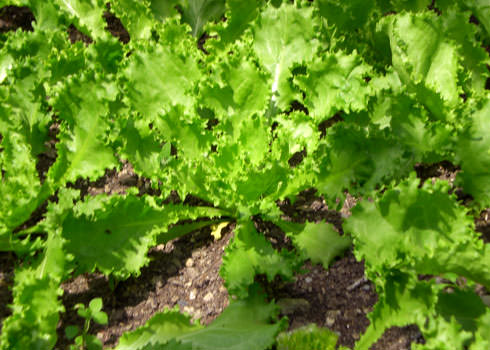 In her book, Animal, Vegetable, Miracle (HarperCollins Publishers, 2007), Barbara Kingsolver makes a good point that we now are fixated on must-have lettuce for salads all year round. In the spring, though, I say an unreserved hurray for salads! The first leaf lettuces are so light and flavorful, such a relief and contrast to winter roots. The raised growing beds of soft greens are a spectacular mosaic of deep red flecks and pale stripes that make vibrant, verdant bouquets.

We began with cross-season salads in March, made with wintered-over Napa cabbage and carrots in a dynamite cole slaw, and tossed with first chives and the last apples thrown in. I like a light oil-and-vinegar version with just a little mayo or a faux Asian dressing, with soy, sesame and ginger. 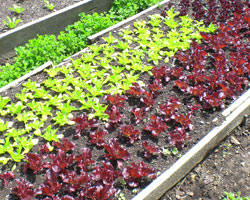 Next came the little flower cushions of mĆ¢che; fluttery, pungent arugula; and lemony sorrel. Then with the leafy lettuce in sturdy production, mint was up for the plucking and radishes hit the CSA in late April. You see the oblong French radishes, sliced and layered thinly with good butter on crunchy bread, as a light starter in traditional French meals.

Ruffled blue-green spinach will bounce into the bowl soon. I have Patricia Wells to thank for the combo of young spinach, radishes and mint with lemon-chive dressing (recipe below). Thereās wild salad food to forage (from the farmersā market), too: onion-y ramps, a lucky morel, curled-tight fiddleheads. Thereās so much plenty for the salad bowl already when the tomatoes, peppers or cucumbers are just a twinkle in the farmersā eyes.

As for dressing, I know you gave up the bottled stuff years ago and can do the basic oil, vinegar, mustard thing in your sleep. Early in the season, I riffed on that vinaigrette with local maple syrup, garlic and shallots. If you add a little browned bacon and heat it up, it softens spinach or arugula just a little to make a silky, old-fashioned wilted salad.

Chopped egg makes a substantial garnish, as does carefully pan-toasted, stale bread cubes. Brown them in a combo of butter and olive oil with a willy-nilly mix of chopped herbs and garlic for thrifty and vastly better homemade croutons.

At Rainbeau Ridge, the diversified suburban farm where I hang out, weāre making salad dressings for the new lettuces, using the farmās herbs and signature goat cheese. 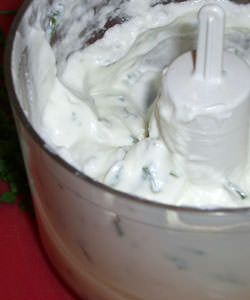 This recipe is in the memoir/how-to/recipe book about the farm, that I co-authored, called Over the Rainbeau: Living the Dream of Sustainable Farming.

Use an immersion blender or food processor to thin out the cheese with the milk. Blend in the remaining ingredients.

This recipe makes enough for several salads and will keep for about a week.in the fridge.