Longer and more muscular than Thoroughbreds, the Standardbred, is primarly used in harness racing. 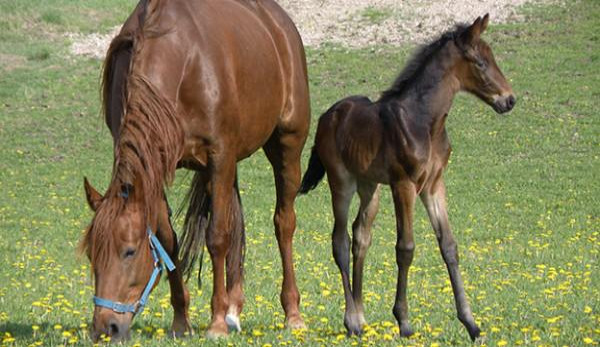 Use: Standardbreds are bred for harness racing, but go on to a variety of careers after retirement. The breed has been used in parades, dressage, military reenactments, cattle drives, obstacle challenges, police work, pleasure driving, trail riding, jumping, endurance and western events.

History: The Standardbred breed developed in the 1800s from the Thoroughbred, Canadian, Narragansett Pacer and other American breeds. The Thoroughbred origins of the Standardbred trace back to Messenger, a stallion foaled in England in 1780, and later exported to the United States. Man Oâ€™War was a descendent of Messenger. Nearly all Standardbred horses registered today go back to a stallion named Hambletonian 10, who was the great-grandson of Messenger. Hambeltonian 10 lived in the 1800s, and was a very successful sire, producing a number of harness horses that easily beat the competition of the day. Standardbreds were initially used only to race at the trot. Pacer races were added in the late 1800s. The breed was given the name “Standardbred” in 1879 because the horses had to complete a one-mile race in a certain, or â€śstandard,â€ť amount of time. Only horses that could do this could be registered. Today, most Standardbred races are still one mile long. An organization called the U.S. Trotting Association was created in 1939 to keep track of the pedigrees of Standardbred horses and promote the sport of harness racing. In 1940, a group of businessmen took the rural sport of harness racing and introduced it to New York City as a pari-mutuel activity. Years later, the night-time racing of trotters and pacers pulling sulkies caught on in metropolitan areas around the country. Today harness racing is well established as a sport.

Special Considerations/Notes: Many adopted Standardbreds used for racing need to be retrained to canter.