Start Begonias From Seed With These Tips & Tricks

It's easy to start begonias from seed if you keep a few things in mind. Learn which begonias are easiest to grow from seed and exactly how to do it. 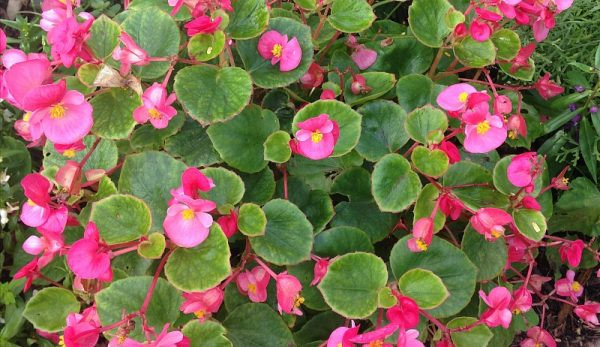 While prime seed-starting time is still weeks away for most parts of North America, there’s one plant that requires a bit more time to grow. Begonias are beautiful annuals that are both shade loving and deer resistant, and they make a beautiful addition to almost any landscape. If you want to grow some of your own, you might be surprised to learn that, unlike most other annual flowers, mid to late January is the perfect time to start begonias from seed.

Why Start Begonias From Seed

Annual flowers are definitely not the most expensive plants at your local greenhouse, but if you grow (or sell) a lot of them, starting your own from seed can save you a ton of money. While starting marigolds, cosmos and salvias from seed is as simple as can be, when you start begonias from seed, it requires a bit more time and effort.

As with many other plants, starting begonias from seed, rather than buying transplants from a grower, means you’ll have a better varietal selection to choose from and you’ll get a lot more bang for your buck. Most commercial growers focus on growing just three or four popular types of begonias, but there are dozens of selections you can choose from when growing begonias from seed.

How to Start Begonias From Seed

Begonia seeds are extremely tiny. In fact, each seed isn’t much bigger than a speck of dust. Handling these miniscule seeds can be difficult, though you can purchase pelleted seeds to make the job a bit easier. Add that to the fact that begonias take a very long time to germinate, and that’s probably why most folks shy away from starting them from seed. However, once you get the hang of starting begonias from seed, you’ll discover your efforts are well worth it.

Use new seedling trays or flats to plant begonias from seed. The plants are prone to developing fungal diseases, including damping off and botrytis, so new or disinfected seed trays are a must. You’ll also need new sterile potting soil that’s formulated specifically for seed starting.

Once your seed trays are filled with sterile potting mix, it’s time to plant your begonia seeds. Begonias need light to germinate, so simply broadcast the seeds across the surface of the potting mix and press them against the surface of the soil with your fingertips or a flat piece of cardboard. Do not cover the seeds. Try to distribute them evenly across the soil, but it’s okay to have them spaced fairly closely. Begonias always need to be transplanted when they’re young, so if the seedlings end up too close, it’s no big deal; you’ll be separating them later anyway.

When I start begonias from seed, I water the newly planted seeds in with a mister, rather than a hose nozzle, to make sure they stay in place and don’t float away.

Cover the seeding tray with a sheet of clear plastic or a humidity dome, and place the tray under grow lights that run for about 14-18 hours per day and stand about 2-3″ above the tops of the trays. Put heat mats under the trays to improve and speed germination. Some varieties of begonias can take weeks, if not months, to germinate, so don’t give up on them even if it seems to be taking forever. Make sure the seed flats don’t dry out; water them with a mister or spray bottle whenever necessary. Remove the plastic or humidity dome as soon as the seeds start to germinate. Raise the lights as the plants grow.

When to Transplant Begonias Started From Seed

As soon as your begonia seedlings develop their first true leaves, it’s time to transplant them. Use a spoon or spatula to lift a section of young plants up out of the tray and then use your fingers to gently tease them apart. Once separated, replant the begonia seedlings into nursery 4 packs or small plastic pots of new sterile potting soil.

Keep the pots or nursery packs well watered and continue to keep them under the grow lights for 14-18 hours per day. Once the danger of frost has passed, it’s time to begin to move your begonias outdoors for a few hours per day. Gradually increase the amount of time they spend outdoors over the course of two to three weeks until they are outdoors full time. This process of hardening off means a reduced chance of transplant shock and sunburn once your begonias are planted outdoors permanently.

Which Begonias Should You Start From Seed?

There are many types of begonias you can start from seed. Some types, like rex begonias, are easier to grow from root or leaf cuttings, but the experience of starting other types from seed is lots of fun. When trying to start begonias from seed for the first time, I recommend beginning with wax begonias, Dragon wing begonias, Angel wing begonias, cascading begonias or tuberous begonias.