Oom Sha La La: I Want to Start a Garden—and I Finally Did!

Cool farm tools, a new little helper, and friends who share ideas and the land contribute to the momentum making this year look quite promising for my garden. 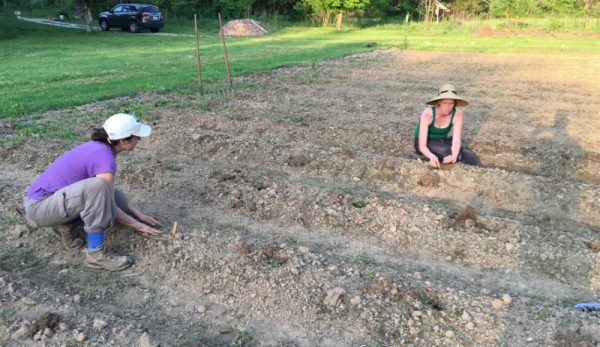 Have you heard that song “Oom Sha La La” by Haley Heynderckx? It’s folksy angry chick music, so I don’t blame you if the obscure tune didn’t make your playlist. Have a listen if you’d like—it’s been my garden theme song this year. To sum up the lyrics, this girl is living a pretty crummy existence, and the only thing that makes it better is starting a garden. After rambling off depressing nonsequiturs, she starts shouting, “I wanna start a garden” over and over and over again. It’s the kind of music that makes you want to start a coffee-shop mosh pit. It’s quirky, but it got me through the winter with my eye on the prize.

And, well, we finally made it. We started our garden. (Cue jumping and headbanging.)

In that sliver of time between when the soil was too wet to work and when it would rain again for seven days straight, we managed to get the garden tilled and plants in the ground. It was three days of hard work in 90-degree heat—much much too hot for mid-May—but the garden season has officially begun. Overall, I’m optimistic about the season ahead, and here’s why:

1. The Asparagus Bed Is Weeded

Last year, I never finished weeding and mulching our 100-foot-long asparagus bed (thank you, morning sickness). While it might have taken me six weeks to complete the whole thing this year (thank you, cutest asparagus-patch baby in the world), it’s finally done. Now, to keep those pesky morning glory vines from taking over!

2. My Garden Goals Are on Track

The weather this year, between bipolar temperatures and persistent precipitation, has made gardening difficult. Plus, I lost several of my herb starts, which died suddenly from unknown causes. Despite these things, I’m making good progress toward my garden goals:

3. I Learned to Use a Broadfork

If you haven’t used one of these, let my friend Jesse Frost tell you why you should. As I mentioned, our garden was too wet to till for a long time—one of the inconveniences of trying to garden in a valley full of Kentucky’s quintessential clay soil—so we went light on using the tiller. You turn that soil when it’s too wet, and your garden season is over before it even starts. As a precaution, instead of heavy tilling, we did an extra turn of the garden beds with the broadfork before planting.

I wish I could be a noble farmer and say the reason I enjoyed using the broadfork is that it saved many of the precious microorganisms living in the soil. I mean, yes, that. But also, it’s just really fun to use. Why bother with a workout routine when you have farm toys like this?

Yes, I went there with a cheesy pun. But really, some of the best moments of the past week have been out on the land with Mr. B., the sweet pea and our friends whose gardens call our land home. You see, our goal with this land is to share it. If we get to the point in the next 40 years where we grow all the produce and maybe some of the meat that we eat, that will be a win, but our real hope is that we can share this space with people we care about.

This year, we have a couple of friends gardening alongside us, and that’s really awesome—particularly because I’m a new mom and live 30 minutes from town, so the whole getting out thing doesn’t happen much. But really, it’s neat to have friends nearby to help lend a hand, talk over ideas and laugh when pulling weeds.

And to have an oom sha la la dance party with to celebrate starting that garden!