If you love mushrooms, growing your own right at home is easier than you might think. 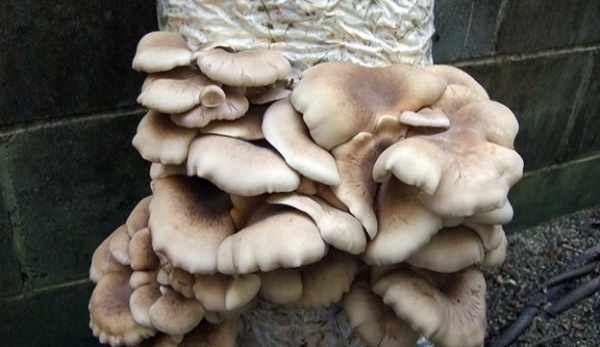 I used to think of gourmet mushrooms as delicacies that I could only afford to treat myself on special occasions. Then I discovered how simple they are to grow. Now, mushrooms are standard fare in my house.

Commercial mushroom growers tend to prefer indoor cultivation, as theyŌĆÖre able to have more control over environmental conditions. For home growers with limited outdoor space or who want to explore mushroom growing with minimal expense and effort, a ready-to-grow indoor kit is the way to go. The majority of the work has already been done; simply open the kit and follow the instructions. However, growing mushrooms outdoors can be a rewarding and attractive addition to your existing gardening projects, and fungi are highly beneficial for maintaining ecologically sound landscapes.

The most critical factors for outdoor cultivation are substrate (growing medium) selection and timing. Because fungi, by nature, like to break down organic material, the substrates that can be used are diverse. Practically any wood waste, paper products, compost or manure can potentially be used, depending on the mushroom. Green logs require some additional effort and need to be kept in shaded areas, so weŌĆÖre going to focus on substrates more viable for the standard hobby farmer.

There are a wide range of mushroom varieties to choose from. Your choices will depend on a number of factors, but there is no correct choice. Your location (whether you have a shaded backyard or only a small kitchen) and climate, the availability of mushroom strains that interest you, and your palate are all contributing factors.

Several online resources and print catalogs exist for procuring mushroom spawn, as well as cultivation supplies and instructions for growing. Most of these have sections on selecting mushroom strains for beginners. Read these sections thoroughly, and examine each strain youŌĆÖre interested in for the optimal growing medium, climate (if growing outdoors) and any necessary cultivation materials.

The oyster mushroom┬Āis ideal for growers at all levels because itŌĆÖs highly adaptable and is easy to grow on nearly any wood- or straw-based medium, as well as food refuse. One of the many viable mediums that can be used is coffee grounds. Although oysters grown outdoors tend to fruit in late summer to early fall, you can easily grow them indoors at any time of the year using this method.

An ideal strain to grow with this method is the pearl oyster (Pleurotus ostreatus). Start by collecting enough coffee grounds to fill a five-gallon bucket. Check with your local coffee house, as many offer free used grounds to gardeners. Starbucks even has a Grounds for Your Garden program, which ŌĆ£is offered on a first-come, first-served basis in participating stores where local codes permit.ŌĆØ Store them in the freezer until you have enough.

Order a 5┬Į-pound bag of sawdust spawn, and place the coffee grounds in the bucket. If the grounds are dry, moisten them, but donŌĆÖt let them get too soggy. Use your hands to mix the sawdust spawn into the grounds. Drill holes using a 1/4- to 1/2-inch bit every 2 to 3 inches about an inch above the surface level of the soil around the top edge of the bucket to allow carbon dioxide to escape, and place plastic wrap with a few holes poked in it over the top.

Place the bucket in a cool corner in your house, allowing a couple of hours of indirect sunlight per day or substituting with a fluorescent light. If you place it outdoors, do so only in cooler weatherŌĆö40 to 60 degrees FŌĆöand be sure it is heavily shaded. Mist the surface of the grounds with water a couple of times a day.

When you see mushroom buttons start to appear in two to three weeks, remove the bag and watch how quickly they grow. Harvest when the caps are fully open but still curved slightly downwards.

This method will also work with straw. Soak enough straw to pack fairly tightly into a 5-gallon (or smaller) bucket in hot water overnight to sterilize it, then pack it tightly into the ┬Łbucket, layering a handful of spawn between every couple of inches of straw. Many other containers can be used as well, including a laundry basket, provided you fully enclose the basket in a plastic bag or box initially to provide optimal moisture.

Chances are if youŌĆÖve only eaten one type of mushroom in your life, itŌĆÖs the Agaricus bisporus. Also known as button mushrooms, creminis are a multi┬Łbillion-dollar industry and can be found in nearly every American grocery store.

Mature brown cremini (differing only in color from the white variety), usually from second or third flushes, grow large and meaty and are marketed as portobellos. They can be easily grown using grow-at-home kits indoors and can be grown outside, though not as easily as other varieties. Well-suited to large-scale production, this variety requires growth on a mature manure substrate. It is a secondary decomposer, meaning the manure must first be heavily composted before it can be inoculated.

The optimal time for growing is dependent on your region. Portobellos prefer warm weather, between 60 and 70 degrees F in the day and no lower than 50 degrees at night. To grow them, youŌĆÖll need an 8-inch deep, 4-by-4-foot raised bed and enough well-seasoned, manure-based compost to fill it. Fill the bed, lay cardboard boxes over the manure and cover the bed snugly with black plastic. Leave for two weeks to allow solar radiation to sterilize the soil.

Order mushroom spawn, and remove the plastic and cardboard when ready. Sprinkle the spawn over the surface of the bed and gently work it into the compost. In about two weeks, you should see a white film form on the surface. Sprinkle some premoistened peat moss over the surface in a 1-inch layer. Lay moistened newspaper over the surface, and mist it regularly for two weeks.
After two weeks, remove the paper and continue to moisten the soil. In another couple of weeks, youŌĆÖll begin to see pins (small mushroom heads) begin to pop up. Harvest at any point, from small baby bellos to large, meaty portobellos.

Portobellos can be grown via a similar method indoors. Rather than building a raised bed, take a large tray with similar dimensions, sterilize outdoors with black plastic and move inside to continue the process.

Unless youŌĆÖre cultivating your own mushroom strains, which requires ┬Łhighly sterile laboratory conditions, pests arenŌĆÖt generally a problem for mushroom ┬Łgrowers. For mushrooms grown outdoors, some common garden pests could potentially cause problems. IŌĆÖve noticed box ┬Łturtles in my mushrooms that I grow on logs. Considering that theyŌĆÖre, well, turtles, the best method for keeping them away is to check your mushrooms regularly and simply move the turtles elsewhere.

Slugs and snails can be problems, as well, and can reach areas turtles canŌĆÖt. If you notice either, some nontoxic solutions include setting out a bowl of stale beer, which the pests will crawl into and drown, or sprinkling diatomaceous earth┬Āaround the growing area. Again, regular monitoring will allow you to quickly find and eliminate these pests.

You may also notice small bugs in the gills of your mushrooms when you pick them. Soldier beetles, fruit flies and fungus gnats like to lay their larvae in mushroom gills. A good way to get them out is to work a brush or fine-toothed comb through the gills, blow them out with a hairdryer or suck them out with a vacuum cleaner. Any you miss arenŌĆÖt harmful and will come out in cooking or dehydrating. To prevent this, try picking the mushrooms while their caps are still curled downwards.

Mushrooms possess myriad health and medicinal benefits. While each strain has its own qualities, most are highly beneficial to the human immune and digestive systems, possess high degrees of antibodies, are anticarcinogenic, and can help regulate blood pressure and lower cholesterol.

Portobellos are part of the Agaricus species, and can contain from 25 to 49 percent protein (dry weight). However, any health benefits are mitigated substantially in commercial varieties, as the portobello/button mushroom industry is known to use high levels of pesticides. While mushrooms are often used in mycoremediation (the use of mushrooms to degrade chemicals), chemicals sprayed directly on the fruit bodies will be absorbed by the mushrooms and will not break down substantially before being ingested.

Oyster mushrooms contain 15 to 30 percent protein (dry weight) on average, have been shown to shrink tumors in mice and help to regulate blood sugar.

These are just two of many varieties. I encourage you to start with the variety and method with which you feel comfortable and go from there. Before you know it, youŌĆÖll be the most fun guy (or gal) on the block!