The onion family (Alliaceae) consists of about 400 closely related cousins. Although I always grow onions, garlic and shallots, one of my favorite members of the onion clan is the leek. 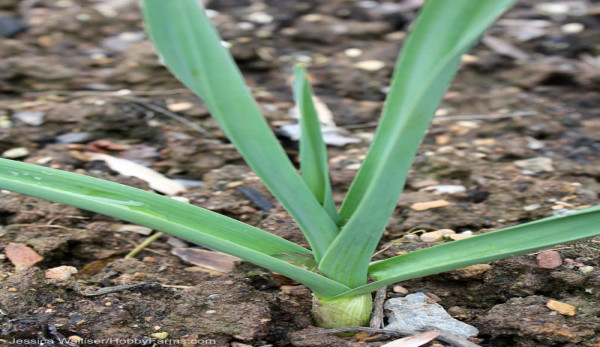 The onion family (Alliaceae) consists of about 400 closely related cousins. Although I always grow onions,Â garlic and shallots, one of my favorite members of the onion clan is the leek.

Leeks find a home in my garden every season, not only because I enjoy their mild onion-like flavor (a true delicacy!), but also because they are harvested during times of the year when little else comes fresh from the garden. In fact, I’m still harvesting leeks that I planted in March, and I will continue to harvest them through the winter and into next spring.

Because leeks require a long growing season, they are one of my earliest seed-starting efforts each winter.Â Leek seeds should be started indoors underÂ growÂ lights about six to eight weeks before they are planted outside in late March. I begin sowing leek seeds in mid-January and continue to sow more seeds every two weeks until late February. If you can’t start seeds of your own, transplants can be purchased from someÂ seed catalogs or perhaps from your favorite local nursery. As soon as the seedlings are as thick as piece of heavy thread, they can be planted out into the garden. Leeks are extremelyÂ cold-tolerant so don’t worry about moving them outdoors too soon. Space the seedlings about 4 inches apart, working plenty of organic matter and a handful of bone meal into the area. Bury them very deeply, so that just the tips of the thread-like leaves stick up out of the soil. The deeper they are buried, the longer the white, edible portion will become.

Keep the newly transplanted seedlings well-watered, and once they reach the thickness of a pencil, blanch them. Blanching is done by simply mounding several inches of soil up around each plant and leaving it in place until harvest. This process increases the length of the edible white portion by blocking out light and softening the tissue. Some growers plant leek seedlings in a foot-deep trench. As they grow, the trench is gradually filled to the top over the course of several weeks, again blanching the stems and increasing the edible portion.Â Â

Leeks can grow up to 24 inches tall and 2 inches around. The edible portion is the lower 6 to 10 inches of the stem, which is brilliant white. Unlike other members of the Allium family, leeks do not form a bulb; instead we eat the large leaf base and the lower portion of the leaves. Leeks planted in the early spring are intended for fall harvests, though I leave some of my leeks in the ground with a 3-inch layer of straw mulch. I can harvest these all winter long and even well into the following spring. Leeks are fully hardy, and if mulched properly, they will be one of the springâ€™s first pickings.Â