Stay Cool in the Heat with Elder Blossoms

Discover the magical wonder and practical use of your garden-grown or wildcrafted elder. 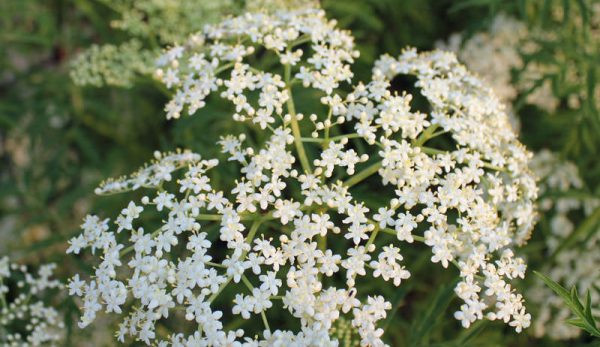 They say if you fall asleep under an elder on midsummerâ€™s eve, you will meet the fairies. At the very least you may see them parade by on their way to the midsummer feast.

Itâ€™s easy to imagine the magic of the elder tree this time of year as it waves its lacy, white flowers in the air. Midsummer eve is coming up at the end of this week, and Iâ€™ve always been tempted to spend the night under the elder out in my garden to see what dreams may come. Some suggest that itâ€™s actually the flowerâ€™s narcotic effect that perpetuates this story. Either way, what could be more other-worldly than gazing up at a bright moonlit sky through the wispy white flowers of one of these shrubs?

Elder is typically on my mind this time of year because this is when I head out to my secret wildcrafting haunts to collect wild elder blooms. In Europe, the standard variety of elder is Sambucus nigra, but here in the U.S. we generally encounter Sambucus canadensis. Both are filled with the same benefit for the body.

I love this time around the summer solstice. Here in Ohio the sky is a bright, cloudless blue. The wind calms and the days lengthen. Summer is in her peak, and weâ€™re harvesting at full tilt while also planting, watering and weeding. We are exhausted!Iâ€™m getting ready to set out for my first trip of the year. I usually collect elder bloom, mulberries, catnip and mullein all at the same time. Driving my car up the lane, we fill it to the roof while my children in the back seat stuff their mouths until their hands, lips and shirt fronts are stained with purple mulberry juice.

Even though I wildcraft elder, itâ€™s very important to me to grow this tree in my garden, as well. Traditionally, itâ€™s seen as the “elderâ€ťâ€”or wise oneâ€”in any garden. This is tied to many folkloric beliefs that associate the elder tree with a wise woman fairy who advises us, should we show respect, on what should be kept and what can be set aside. In American lives filled with too much stuff, couldnâ€™t we all use a bit of advice on that?

This time of year finds me wanting to work in the yard while the sun bakes overhead. I get overheated so easily, and elder is there for me. In June, I tend to start my day out by making a sun-tea of elder blossom, peppermint and often hibiscus. When I sit down for a break at noon, this tea is there to not only quench my thirst, but also to help cool me down. Elder, when used as a hot tea, can bring about the sweating necessary to break a fever, but when served in the summer, it can be used to quickly cool the body.

So many of us know elder only for its berries, which are antiviral and great in a syrup for cold and flu, yet traditional societies that lived with the elder knew it as a first-aid mecca. All parts of this plant were used at one time or another and addressed bruising, respiratory ailments, digestion, colds and more.

Itâ€™s so easy to grow the elder, as itâ€™s not too particular about its soil. Once you get one started you can easily take stem cuttings and start many more so that you have fresh fruit and medicine for years to come.

Whoâ€™s game to join me under the elder branches on midsummer eve? I canâ€™t think of anyone who couldnâ€™t benefit from a little magic and wonder. I believe Iâ€™ll sit quietly for a spell with my children and listen to them tell stories while we drink some elder-blossom tea!