Photo by Audrey Pavia My friend, Stephanie, and my rooster, Mr. Mabel, have a stormy relationship. Early last week, I got an email from my old friend, Stephanie, who lives in Pittsburgh. Her planned trip to Russia fell through, and she asked if she could come stay with me this week. I was thrilled—I hadn’t […] 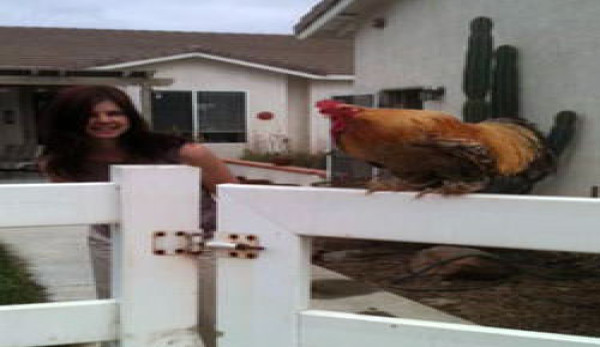 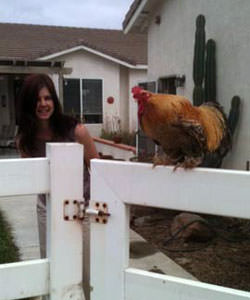 My friend, Stephanie, and my rooster, Mr. Mabel, have a stormy relationship.

Early last week, I got an email from my old friend, Stephanie, who lives in Pittsburgh. Her planned trip to Russia fell through, and she asked if she could come stay with me this week. I was thrilled—I hadn’t seen my buddy for a few years.

Stephanie loves animals, but living in an apartment in Pittsburgh, she only has one cat. Part of what she enjoys about coming to see me is hanging out with all the animals on our urban farm. Thing is, last time she came out, we didn’t have the chickens.

Excited about meeting the chickens and eating farm-fresh eggs, Stephanie couldn’t wait to see them. I picked her up at the airport late Monday night and left early the next morning for work. When I came home Tuesday evening, I heard about what would be the first of many encounters between Stephanie and my dominant rooster, Mr. Mabel.

I’d heard stories about Mr. Mabel from pet sitters who had come onto the property when no one was home. Seems my red, bantam roo thinks he is in charge of keeping strangers out of the backyard when I’m not around. I’ve heard about him attacking people who dared to try to feed the horses or clean the stalls. Just about everyone who has come into my backyard alone is afraid of him.

I forgot to warn Stephanie about Mr. Mabel’s attitude before I left for work that morning, but it wasn’t long before she found out for herself. When she walked outside to visit the horses, she was mauled by my rooster.

Stephanie is no slouch. Unlike most other visitors who are menaced by this too-big-for-his britches bantam, Stephanie did not think she needed to take his guff, and scolded him loudly for his behavior. Her defiant attitude combined with her complete inexperience with chickens made for a hilarious week of interactions between her and Mr. Mabel.

Every evening when I’d come home from work, Stephanie would have a new story for me about her day with Mr. Mabel. One morning, she was sitting on a chair under the patio when Mr. Mabel came up to her, with his hens in tow. He stopped, stood in front of her, pooped and then crowed loudly, all the while looking right at her. Another time, he waited ’til her back was turned, ran up to her bare legs and raked her with his spurs. Stephanie fought back with a severe tongue lashing, which only seemed to encourage Mr. Mabel’s bad attitude.

By the end of the week, it was clear Mr. Mabel had a real thing for Stephanie. I think it was pure malice, but Stephanie thought it was a crush. She was sure Mr. Mabel wanted to add her to his harem of hens, but like the bratty schoolboy who pulls the girls’ pigtails, he didn’t know how to let her know that he liked her.