Last week, when I wrote about our livestock guardian dog, Feyza, David from Omaha left a nice comment about general purpose farm dogs. (Thank you, David.) We have one of those, too. His name is Steve. 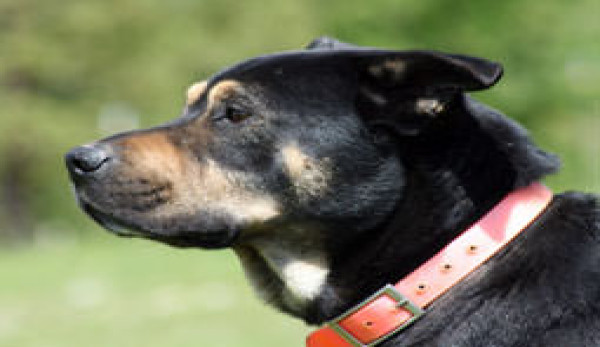 Last week, when I wrote about our livestock guardian dog, Feyza, David from Omaha left a nice comment about general purpose farm dogs. (Thank you, David.) We have one of those, too. His name is Steve.

We have lots of dogsâ€”nine to be exactâ€”including Feyza. Most of them are ours because uncaring people who no longer wanted them and dropped them off along the roadside to fend for themselves. They got lost and hungry, and when Mom and Dad saw them, they stopped the van and picked them up to bring them home. Mom and Dad try to find new, caring owners for the lost dogs, but sometimes thatâ€™s hard. So some of the dogs stay on with us forever.

Steve wasnâ€™t dropped off along the road, though. He came across the field to become our dog. Mom was feeding theÂ horses late one evening when a scrawny, sad, half-grown puppy came creeping up the hill. (This was before Dad built the woven wire perimeter fence around our farm.) She called to the pup, but he was scared and scampered away. She went to the house and made him a pan of kibble with noodle soup on it and left the pan by the fence. The next morning, the puppy was cowering in the barn. He was still terrified, but knew heâ€™d found himself a home.
Â
Steve grew up to be a powerful dog. Right away, Mom and Dad could tell he was partÂ Rottweiler and also something else, but what? They found out a few months later when a neighbor dropped by and said, â€śI know that dog!â€ť

Steve was one of a litter of 11 unwanted puppies whose mom was a registeredÂ Chow Chow and whose dad was a purebred Rottweiler. Steve got most of his looks from his Rottweiler father but his tongue is black like a Chow Chowâ€™s

Mom and Dad asked Steveâ€™s first owners if they wanted him back. They still had a bunch of half-grown pups from that litter, and thankfully, they said no.

Steveâ€™s never gotten over being afraid of being chased by scary things like the guineas or Katy the Alpine goat. And if someone unexpectedly moves too fast, Steve still cowers. Nevertheless, despite his puppyhood fears, Steve stepped into the role as farm dog, and he does his job very well.

When Mom got sheep, she was afraid that Steve would chase and hurt them because Rottweillers have strong prey drives. But Steve liked the sheep. He snoozed with them when they grazed in the yard and let the lambs spronk off of his back. Then, he assumed the role of bottle baby trainer and guarded them in the yard by day and indoors by their sleeping crate at night.

Even though heâ€™s scared of little things, Steve helps Feyza patrol the farm and keep interlopers away. Heâ€™s a good example of the old saying, â€śYou canâ€™t judge a book by its coverâ€ť A Rottweiler-Chow Chow farm dog? No way! But Steve is a good one.Â Â Â Â Â