This time of year lots of human males put on clothing that makes them look like walking leaf piles. 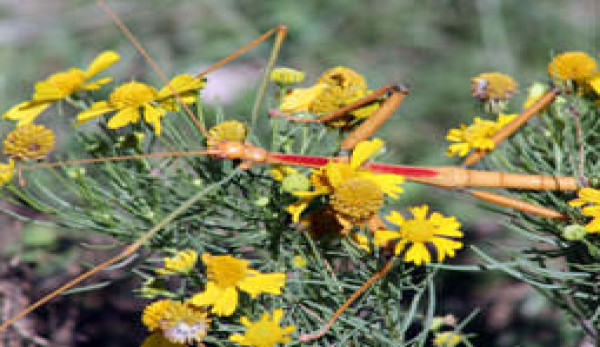 This time of year lots of human males put on clothing that makes them look like walking leaf piles. Then they go out in the woods and sit in trees to shoot at deer. They call their leafy-looking clothes camouflage, but their disguises donâ€™t beat the camouflage of the bugs on our farm.

We have lots of walking sticks in the Ozarks. Theyâ€™re cool because they really look like sticks! The one in the picture was hiding in bitterweed in the big pasture, but Momâ€™s counted six other varieties on our farm just this year.

Last night, Uzzi and I Googled walking sticks. There are more than 3,000 kinds of walking sticks in the world; most live in the tropics, but lots of species live in temperate areas, too. Their Latin name is Phasmida (from phasma meaning â€śghostâ€ť). In North America, we call them walking sticks or stick bugs, but British people and Europeans call them stick insects. They come in all sizes from a 1/2-inch long North American species to Chanâ€™s megastick of Borneo, with a 14-inch body (22 inches long with its legs extended). Wow!

Unmated female walking sticks can reproduce parthenogeneticallyâ€”that means they donâ€™t need mates. They lay fertile eggs that all hatch out as females. Not that there arenâ€™t a few studly male walking sticks around, because there are. But males are smaller than females and scarce; the eggs they fertilize have a 50/50 chance of being males.

Walking sticks are nocturnal feeders, so during the daytime they hang around, hiding until night comes again. Sometimes they sway back and forth to imitate a breeze blowing through their host plant. If threatened, they may let go, fall to the ground and play dead.

All young walking sticks and some adults can also re-grow a leg if they lose one. That trick could really come in handy!

And they donâ€™t bite, but some species spit awful-smelling stuff if threatened, so watch it if you pick up a walking stick.Â Â  Â Â Â